/  Events /  Energy /  The External Dimension of the Energy Union

The External Dimension of the Energy Union

In the ‘Energy Union’ package of February 2015, the Juncker Commission stated that “ensuring security of supply” would be the first of its five objectives. The European Council welcomed this package and, in June 2015, requested the EU High Representative Federica Mogherini to “prepare an EU global strategy on foreign and security policy” for June 2016. Lately, the EU Commission re-confirmed the central role of security in its strategy with the release of the “Energy Security Package” published on 16th February.

Beyond the EU, the revolution in oil and gas (prompted by US shale production and deepened by an enduring price crash) has created a new and particular landscape where our Energy Union has to position itself and grow. Simultaneously, the success of Paris COP 21 has also opened a new energy era at a global level. Therefore, the “External Dimension of the Energy Union” has now become a crucial issue at the core of European policy. 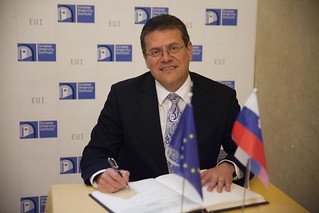 This FSR Conference on the ‘External Dimension of the Energy Union’ will investigate the current scenario, with a particular focus on the role played by gas in EU external relations.

Following the keynote address from the Vice-President of the European Commission, Maroš Šefčovič, the conference will be divided into three sessions:

Participation in this event is by invitation only.

Are contracts-for-differences here to stay?

The European energy crisis is dragging on, and voices to reform electricity markets are getting louder. Market reforms are going…

A deep dive on renewable hydrogen and industrial policy going into 2023: The US, EU, & beyond

In an effort to bring some clarity to the evolving landscape of industrial policy going into 2023, we dedicate this…