This is the second installment of our Topic of the Month: Towards a Hydrogen Economy 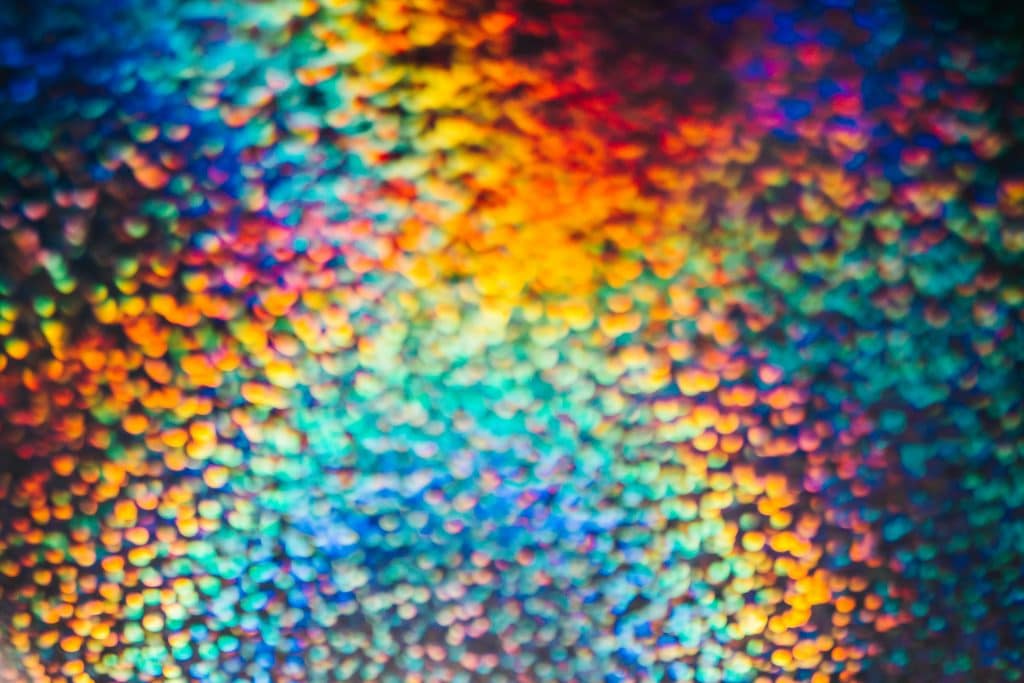 In our article released last week – focused on hydrogen demand – we mentioned that hydrogen is present in very limited quantities as molecules in the Earth’s atmosphere, but in large quantities as atoms within different molecules (e.g. water, biomasses, methane ). In this article, we focus on the production of hydrogen from these different molecules. We first define ‘clean’ hydrogen and identify potential production technologies. Then, we focus on both current and future production costs for the relevant technologies from an analysis based on a peer-review of recognised studies. We also present costs drivers we identified as critical for assuming future hydrogen production costs. Finally, we briefly outline other factors – besides production costs – that could play a role in determining the estimated amount of future clean hydrogen production.

Which technologies can produce clean hydrogen?

In the EU hydrogen strategy communication, ‘clean’ hydrogen refers to ‘renewable hydrogen’, produced by electrolysers run with water and renewable electricity. However, there are many technologies -we identified as much as 22- capable of producing hydrogen.[1] Besides electrolysers, at least another twelve technologies producing mainly hydrogen could also run with renewable energy.[2]

However, not all technologies which could run with renewable energy are currently commercial.  Some are less mature – in concept or prototype stage – and others are more mature – in the demonstration stage. The less mature the technology is, the less information is available in order to formulate credible assumptions on technological costs and on Greenhouse Gas (GHG) emissions released during the production process. GHG emissions also depend on factors external to the production facility – such as methane leakages in gas grids, or GHG emissions from the production of the electricity supplied. Therefore, identifying technologies for ‘clean’ hydrogen production involves a careful assessment of the information available on emitted GHG.

In this article, we refer to technologies for low-, zero- or even negative-carbon hydrogen production we identified as most promising and for which we judged that enough information is available: electrolysers, Steam Methane Reforming (SMR) with Carbon capture and storage (CCS) and methane pyrolysis with Carbon Capture and Utilisation (CCU). Electrolysers and SMR with CCS are currently both in the early commercialisation stage, while methane pyrolysis with CCU is in demonstration stage.

What do we know about current and future production costs?

In the figure below, we report estimates for current hydrogen production costs – free of any “regulatory” costs or subsidies. In particular, the costs for hydrogen production from electrolysers are split into two cases depending on the underlying renewable electricity technology: solar PV or offshore wind. Other electricity sources produce more expensive clean hydrogen (nuclear), or hydrogen with significantly higher GHG emissions (as the current regional power mix, including fossil-fuel power generators). Additional information on the technical assumptions could be found in the recent FSR report upon which all research presented in this article is based. 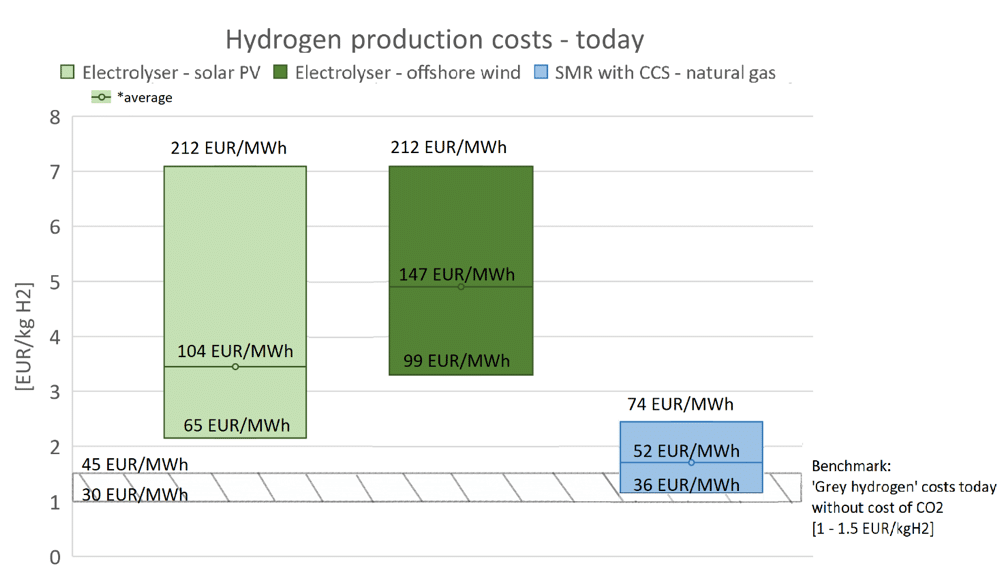 Note: Values in EUR/MWh above the lower-, average- and upper-line of each range refer respectively to the minimum, average and maximum costs per energy unit (in Lower Heating Value – LHV) of each technology.

Today, the cheapest hydrogen production technology out of those in the figure above is SMR with CCS run with natural gas – ‘blue hydrogen’. For the sake of comparison, the production costs of the benchmark ‘grey hydrogen’, which vary between 1 EUR/kgH2 (30 EUR/MWh) and 1.5 EUR/kgH2 (45 EUR/MWh) in the absence of additional costs from CO2 pricing[3], are only slightly cheaper than those of ‘blue hydrogen’. Electrolysers fed with water and solar PV electricity – ‘one type of green hydrogen’ – could provide cost-competitive hydrogen at almost 2.1 EUR/kgH2 (65 EUR/MWh) in geographical locations with a favourable renewable resource. However, average costs for this technology are still two to five times higher than those of benchmark ‘grey hydrogen’.

By 2030, it is unlikely that big innovations may emerge – be those from a commercialisation of currently “immature” technologies, or from breakthrough technologies currently not identified. However, the costs of the technologies in the figure above are expected to significantly decrease and potentially reach cost-competitiveness with ‘grey hydrogen’ under favourable conditions. 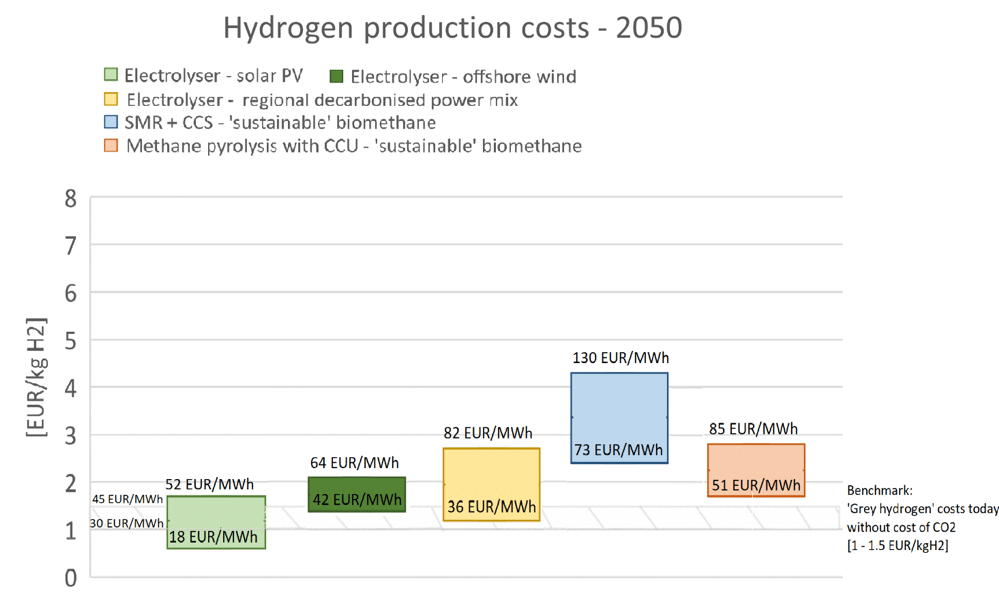 Note: Values in EUR/MWh above the lower-, average- and upper-line of each range refer respectively to the minimum, average and maximum costs per energy unit (in Lower Heating Value – LHV) of each technology.

Two technologies – electrolysers and methane pyrolysis with CCU – could reach cost-competitiveness with respect to the benchmark ‘grey hydrogen’ costs today in the absence of additional costs from CO2 prices. Electrolysers run with solar PV electricity could potentially reach production costs as low as 0.6 EUR/kgH2 (18 EUR/MWh). Instead, SMR with CCS run with ‘sustainable’ biomethane can be assumed to produce hydrogen at the highest cost out of all options included. The ranges are relatively large in some cases, reflecting the significantly different assumptions on future production costs modelled in the FSR report “Cost-effective decarbonisation study”.

Why do assumptions on future production costs differ significantly?

The differences in future production costs modelled could be explained by the fact that, for each of these technologies, the critical cost drivers identified, the respective modelling and the amount of technological information available can be different. We report in the table below the four critical costs drivers by 2050 we identified and modelled for the technologies shown in the figure above. 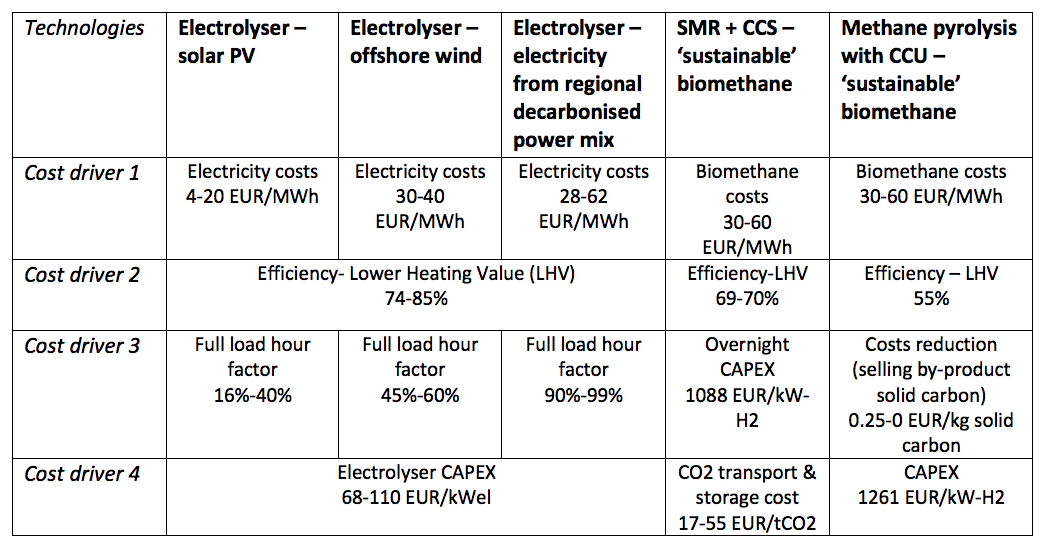 Production costs matter, but how much clean hydrogen can we produce?

In 2019, global production of hydrogen from renewables or from fossil-fuels with CCUS was less than 0.8 MtH2 (27 TWh) out of circa 117 MtH2 (3896 TWh). The rest of this production (>99%) was ‘grey hydrogen’ with high GHG emissions. In order to scale-up EU clean hydrogen production to a 2050 demand which could range 18 to 94 MtH2 (613 to 3115 TWh), lower production costs are only one driver. In particular, we identified five critical drivers for scaling-up clean hydrogen production.

First, the availability of sufficient demand for hydrogen. This was the main topic of the article released last week “Hydrogen demand: several uses but significant uncertainty”.

Third, the availability of sufficient ‘inputs’ – and the relative delivery infrastructure – to produce clean hydrogen from the production facilities deployed. In particular, we refer by ‘inputs’ to energy vectors (e.g. renewable electricity), feedstocks (e.g. freshwater, biomethane …) [4] and human know-how.

Finally, policies and regulations acting on the critical drivers identified above, but constrained by environmental sub-factors (e.g. availability of raw materials, land and feedstocks).  In the next and final article of this series, policies and regulatory tools intended to promote hydrogen towards decarbonisation will be investigated by FSR part-time professors Andris Piebalgs and Christopher Jones.[5]

[3] In this article, we used the Lower Heating Value (LHV) of 0.0333 MWh/kgH2 to convert between kg-H2 and MWh. This choice is justified by the fact that hydrogen uses as energy fuel generate water vapour, whose latent heat is however not recovered by currently known technologies underlying the uses as energy fuel listed in the previous article.

[5] The author would like to thank Prof. Jean-Michel Glachant, Prof. Ronnie Belmans and Director Alberto Pototschnig for their mentoring during the “Cost-effective decarbonisation study” project. An additional round of thanks also go to part-time Professors Andris Piebalgs and Christopher Jones who coordinated the abovementioned project and allowed me to work on this exciting topic. Finally, I would like to thank also my colleagues & friends – both those who contributed to the peer-review of this article and not – who shared their experience with me and supported me along my work.