This is the first installment of our Topic of the Month: Towards a Hydrogen Economy 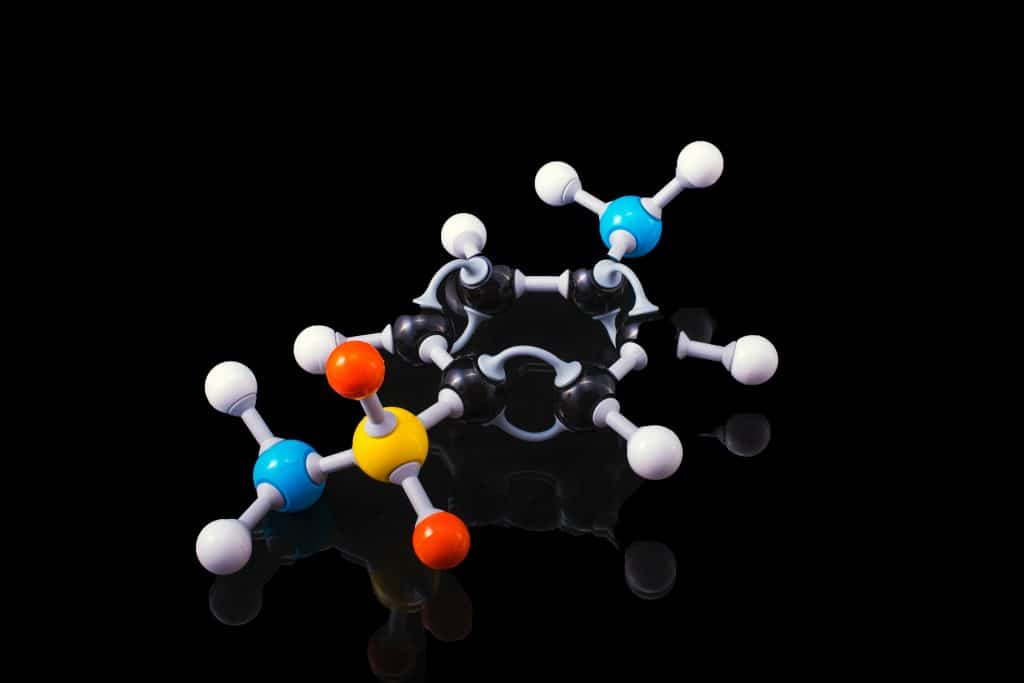 Different and sometimes contrasting scenarios for the possible development of a hydrogen economy are present in the current debate on the energy transition. Therefore, there is a need for clarification based on a rational understanding of the drivers and assumptions underlying those scenarios. In this Topic of the Month series made of three articles, we aim at doing it by shedding light on three main elements of scenarios towards a hydrogen economy.

In this article you are reading, we will define what is hydrogen. Then, we will present today’s hydrogen demand and future hydrogen demand according to recent EU decarbonisation scenarios. We will finish by explaining the underlying main types of hydrogen uses and the critical demand drivers we identified.

In the third and last article to be released, we will explore the policy and regulatory tools currently defined to support the realisation of the hydrogen-related targets proposed at the EU-level. Then, we will also present which are the possible policy and regulatory gaps towards realising these targets in a cost-effective way.

Let us start from the basics: what is hydrogen?

Hydrogen is the lightest and most abundant atom existing in nature. However, its presence as a stand-alone gas molecule is very limited in the Earth’s atmosphere. Apart from this limited amount, hydrogen existing in nature is mostly combined with other atoms in different molecules. Some examples are water, biomasses, methane, and coal.

What about the future of hydrogen?

The hydrogen strategy by EU EC has set a production target of up to 10 Mt of renewable hydrogen in the EU by 2030, and hydrogen demand – not specified – may be close or superior to this amount. Similarly, no target on hydrogen demand by 2050 is reported by this communication. Therefore, we report in the figure below five scenarios on hydrogen demand by 2050 according to recent EU decarbonisation studies[3]. The reader may find additional information in a recent FSR report upon which this research is based. 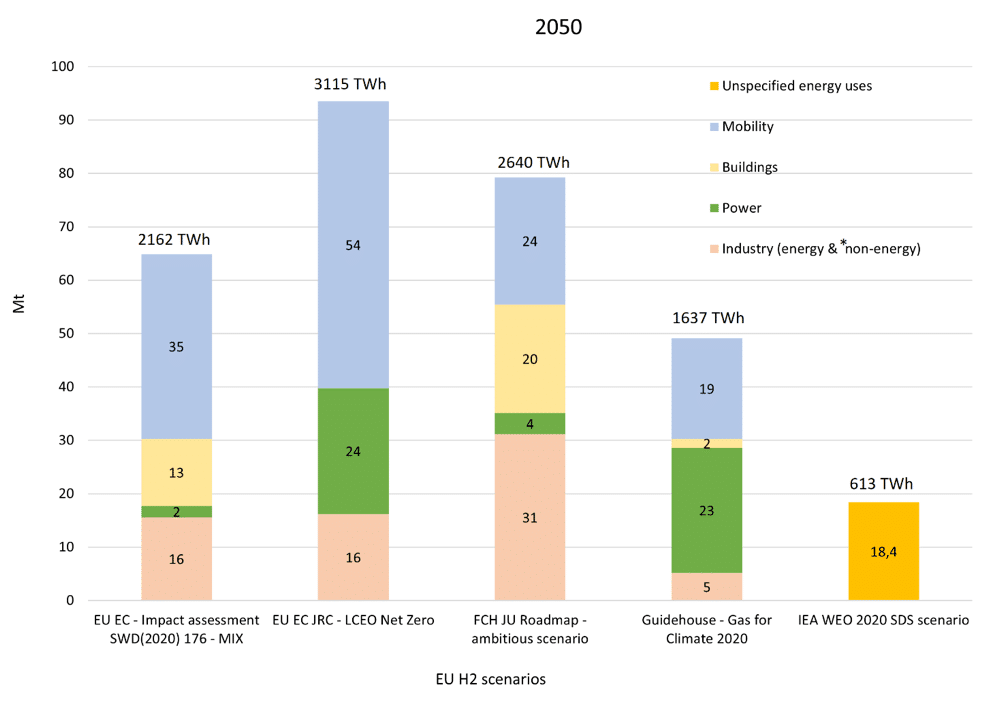 Note 1: hydrogen uses as a feedstock to produce synthetic fuels are allocated to each main type of uses identified, except for IEA WEO 2020 SDS scenario, which does not specify those.

Note 3: Values in TWh reported above the bars refer to the aggregated hydrogen demand by 2050 according to each scenario.

To explain these differences, we look into the underlying four main types of hydrogen uses: mobility, buildings, power and industry (energy & *non-energy). [4]

Mobility uses require hydrogen as an energy fuel. In particular, we can distinguish these uses into five main transport modes: passenger road transport (e.g., FCEV cars), freight road transport (e.g., FCEV trucks), trains, maritime and aviation. In some countries there is a significant push for hydrogen uses in passenger road transport, freight road transport and trains. However, the future cost-competitiveness of the underlying technologies vis-à-vis electrification-based technologies is largely debated. Instead, maritime and aviation are considered ‘hard-to-electrify’ transport modes, whose decarbonisation would require hydrogen-derived synthetic fuels. According to all five scenarios above, there is little certainty on the amount of hydrogen used for mobility by 2050, which will nevertheless be likely significant.

Buildings’ uses also require hydrogen as an energy fuel. In particular, hydrogen – either blended into the gas grid or provided through dedicated infrastructure – could potentially provide space heating, water heating, cooking and other energy services. However, the first option (blended into the gas grid) would not be compatible with the complete decarbonisation of the building sector, whereas the second (pure hydrogen) is expected to be less cost-competitive than electrification-based technologies. The uncertainty on the amount of hydrogen used for buildings by 2050 can be seen through the diverging estimates according to the scenarios above.

Power-related uses require hydrogen as an energy fuel in order to generate electricity. Some examples are seasonal storage of electricity – stored as hydrogen – and electricity generation during peak loads through hydrogen-based gas turbines or fuel cells. However, assessing the real need for these uses is also tricky. In fact, the estimated amount of hydrogen uses for power generation by 2050 also diverges significantly across the scenarios above.

Finally, industry uses require hydrogen either as an energy fuel or due to its chemical properties – also referred to as “uses for processes”[5]. Some examples of the first are the uses of hydrogen to produce high-temperature steam in glass and cement industries. However, the expected competition with combustion of biomasses and electrification raises questions on the effective future of hydrogen for these uses. Instead, the second category (uses due to hydrogen’s chemical properties) includes diverse end-uses: as a feedstock for the manufacturing of non-energy products (ammonia[6], plastics …), as a feedstock to produce synthetic fuels, as a chemical for treating steel materials and crude oil in refinery stations, as a reducing agent (in iron and steel industry, in electronics …), as a blanketing gas and finally as a coolant. The only two uses for processes included in the figure above were those as a feedstock for the manufacturing of non-energy products – reported as “non-energy” in the legend – and those as a feedstock to produce synthetic fuels – allocated to the respective main types of uses for which those synthetic fuels would be used. Unfortunately, the data relative to other uses was not disclosed. As the reader can observe, the amount of hydrogen used for industry according to the scenarios above also diverges significantly.

Why do the scenarios differ on the amount of hydrogen for these four main types of uses?

An explanation is that, for each of these types of uses, the choice of the underlying demand drivers and the respective modelling can be different. Below we refer to four critical demand drivers we identified.

First, the overall demand for each of these types of uses has to be assumed or modelled for a certain region. This demand will depend on sub-factors both related to macroeconomics (GDP, size of the population, circular economy) and microeconomics (demand for specific services, e.g. steel or passenger transport).

Second, the consumer technologies reliant on hydrogen which will effectively become commercial have to be identified, together with the expected commercialisation year. A significant amount of consumer technologies reliant on hydrogen are still under demonstration and could face under-investment, leading to a “premature death”.

Fourth and finally, policies and regulation can influence the three critical demand drivers identified above in a significant way. The choice of the policy and regulation tools, and how to implement them, will be investigated in the third article of this Topic of the Month series.

[1]    In this article, we used the Lower Heating Value (LHV) of 0.0333 MWh/kgH2 to convert between Mt-H2 and TWh. This choice is justified by the fact that hydrogen uses as energy fuel generate water vapour, whose latent heat is however not recovered by currently known technologies underlying the uses as energy fuel listed.

[2]    The author is not aware of more updated estimates, which account for the impact of COVID crisis.

[3] The author would like to give the due credits to JRC researcher Wouter Nijs for his insights towards the comparison of hydrogen in energy scenarios. The publication JRC116452 “Hydrogen use in EU decarbonisation scenarios”  also compares assumptions on future hydrogen demand across other less recent scenarios.

[4] The reader must note the following three facts regarding uses of hydrogen: I. Uses of hydrogen as rocket propellent are a different category not analysed in this article, because it is not statistically relevant to the author’s knowledge. II. We will not analyse the uses of the so-called hydrogen isotopes – “deuterium” and “tritium” – nor those of hydrogen as an atom within compounds. III. Different consumers may require hydrogen for the same type of uses; and a same consumer may require hydrogen for different types of uses.

[5] Uses as an energy fuel may also include uses of hydrogen blended in natural gas, differently from uses for processes.

[6] Hydrogen uses to produce ammonia can be accounted either as feedstock uses to produce synthetic fuels or as feedstock uses for the manufacturing of products, depending on whether the ammonia produced is respectively used as energy fuel or for processes. However, this raises a serious issue of understanding whether a molecule of ammonia is destinated to be used as energy fuel or for processes, and if this understanding is indeed correct.