/  Energy & Climate /  What needs to be done to deliver on enhanced hydrogen ambition in the EU? A timely debate between key stakeholders

On Wednesday, 27 April 2022, an #FSRDebate addressed the pressing issue of a raised ambition and urgency for the role of hydrogen in the European Union (EU). The debate was prompted by the publication of the REPowerEU Communication on March 8, 2022, and in anticipation of part 2 of REPowerEU, due on May 18, 2022. The aim of these documents is to outline the EU’s plans to rapidly scale up renewable energy, diversify energy supplies, and reduce overall energy demand, following continued Russian aggression in Ukraine. Renewable hydrogen is a key component in these plans as it is a possible substitute for natural gas and coking coal that can be produced by a range of international partners or indeed within the EU itself.

The REPowerEU Communication established new aims for renewable hydrogen far in excess of the already ambitious targets outlined in the original 2020 EU Hydrogen Strategy and subsequent Fit for 55 package of summer 2021. Under REPower EU, the new target for clean hydrogen consumption by 2030 increases from 5 million tonnes to 20 million tonnes. According to the Communication, the development of hydrogen infrastructure and funding streams should also expand correspondingly, including storage facilities and port infrastructure, streamlined state aid processes, adjustments of regulatory frameworks, and the creation of a Global European Hydrogen Facility.

These goals are laudable and if realised could go a long way to reducing the EU’s dependence on Russian fossil fuels, particularly fossil gas. Nevertheless, there is still no internal market for hydrogen. Moreover, numerous other foreseen and unforeseen bottlenecks must be overcome to make these hydrogen ambitions a reality, such as massive renewable electricity capacity, preparedness of hydrogen import infrastructure, and so on. With this in mind, how best to trigger investment and developments? What needs to be done on national and European levels? What should be included in part 2 of the REPowerEU Communication?

The debate was chaired by Andris Piebalgs, moderated by Ilaria Conti, and closed by Christopher Jones, all of the Florence School of Regulation. The panelists were: Kitti Nyitrai of the European Commission (DG ENER), Jorgo Chatzimarkakis of Hydrogen Europe, Dr Roland Roesch of IRENA, and Timo Bollerhey of H2Global. Alejandro Nuñez-Jimenez of the Harvard Kennedy School framed the discussion with a presentation of his recent paper “The Future of Renewable Hydrogen in the European Union”, which he co-authored along with Nicola de Blasio.

Ms. Nyitrai opened the session by outlining where the Commission is with the preparation of REPowerEU part 2, as well as the established legislative initiatives and ongoing partnerships.  She explained the urgency of scaling up hydrogen production capacity in the context of the Russian invasion of Ukraine as a means of divesting from Russian fossil fuels as quickly as possible. Ms. Nyitrai also discussed the possibility of importing hydrogen and derivatives at scale from the neighbourhood region and further afield, as well as the required corresponding infrastructure to do so, such as terminals and pipelines.

The Future of Renewable Hydrogen in the European Union: Market and geopolitical implications

Mr. Nuñez-Jimenez then proceeded to present his report. He outlined the ~440 million tonne increase in global annual hydrogen demand forecasted by 2050 including new applications, as well as the problematic nature of current hydrogen production, given that it is almost entirely of fossil origin – with only 0.1% of EU hydrogen produced renewably at present. The presentation served to illustrate the meteoric ramp up in clean hydrogen production capacity required to meet projected demand, even prior to the Ukraine crisis. Mr. Nuñez-Jimenez outlined that the EU is currently a world leader in hydrogen technology and projects, but that the EU is resource-constrained in its production capacity and would therefore likely rely on neighbouring and, to a lesser extent, distant ‘export champions’ to cover the considerable shortfall. He acknowledged the difficulty in predicting the hydrogen demand of different EU countries, but explained that the report assumes hydrogen to occupy the equivalent of 15% of current primary energy demand, an average figure amongst modelling scenarios. 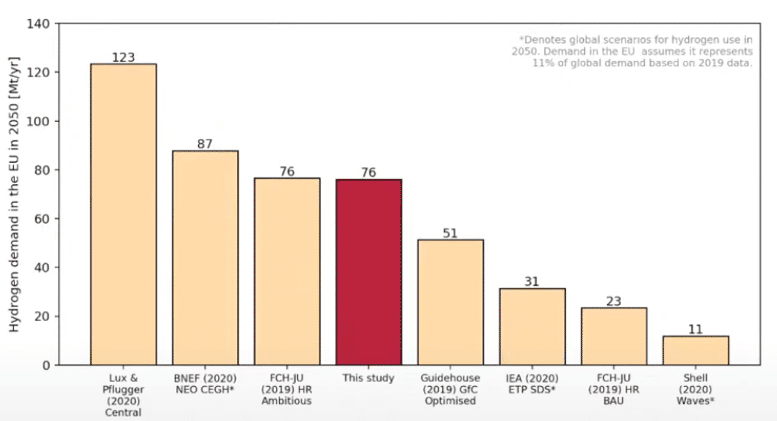 In terms of cost of production, the report finds that costs typically rise with total production, as producers move into less attractive locations as optimal conditions become occupied. Non-EU export champions can typically produce at a lower cost but may have substantial transportation costs which could offset any cost advantage for long-distance transportation. 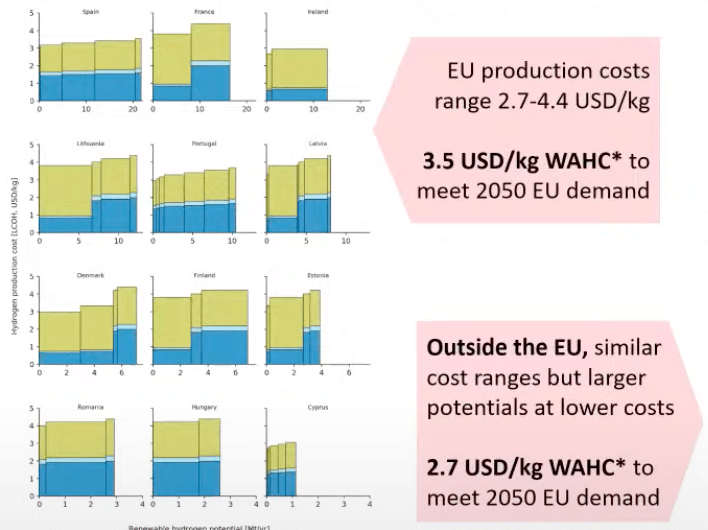 Mr. Nuñez-Jimenez drew attention to the importance of the cost of capital, not only the renewable energy conditions or proximity to demand. For example, a 4% lower cost of capital can reduce supply costs by 25% between 2.5 and 2.9U$D/kg. This can have a meaningful impact on the attractiveness of different import partners.

In terms of policy implications, the report found that lowering market risk and stimulating investment and buildout of renewable energy infrastructure are key enabling factors. The paper argues that these aims could be supported through coordination of enabling infrastructure as well as harmonising standards and regulation across the Union, the results of the report illustrate that disharmony in the approach of Member States will likely inhibit the ability of the EU to reach its’ targets. The full presentation is available for download here.

Mr. Piebalgs and Ms. Conti then opened the floor for discussion amongst the panelists, each participant was given the opportunity to provide their perspective.

Mr. Chatzimarkakis contextualised the 20 million tonnes of hydrogen consumption in the EU by 2030 target from the REPowerEU Communication, explaining that it would require 320 gigawatts (GW) of electrolyser capacity, more than 100x the scale of current global electrolyser capacity. Mr. Chatzimarkakis talked about the need to establish for electrolysers something akin to the European Battery Alliance (EBA), he referred to the work of the European Clean Hydrogen Alliance (ECHA) as a possible starting point for such an initiative. Mr. Chatzimarkakis spoke about the possibility of importing final products (e.g. chemicals, steel) from other countries where there are strong renewable conditions and the availability of raw materials, for example Mauritania or Ukraine. This, he argued, could support the growth of local industries in these countries and efficiently reduce the demand for pure hydrogen in the EU. He spoke about the pressure of market rules and conditions, and the need to afford flexibility to the industry in the early years to support growth and mitigate investor risk.

In his intervention, Dr. Roland Roesch from IRENA welcomed the EU Hydrogen Accelerator initiative and highlighted that the forecasts in Mr. Nuñez-Jimenez’s presentation were well aligned with IRENA’s own conclusions. He spoke about the possibility of integrating energy markets through hydrogen, as well as the opportunity it creates for fossil energy exporters to decarbonise as well as new energy champions to emerge. Dr. Roesch explained that even though the prices of renewable electricity and electrolysers are still falling, it is already possible to produce green hydrogen that is competitive with fossil hydrogen, under the right conditions.

Mr. Timo Bollerhey of H2 Global completed the round by applying the work and ambitions of H2 Global as a catalyst for the ramp-up of the sector to the challenges of such a rapid scale-up of a clean hydrogen economy. He impressed the urgency of the situation, and the need to accelerate public financial support and de-risk private investment in order to deliver on 2030 and 2050 targets. Some of the key issues he covered were: challenges of inconsistent certification, overcoming technology learning costs and securing long-term offtake agreements. Mr. Bollerhey touched on the current best practices that already exist in the certain Member States and the possibility to transpose them, or at least provide guidance for their application in other parts of the Union as part of a wider streamlining effort. Mr. Piebalgs asked what the risks or weaknesses were in the H2 Global model, Mr. Bollerhey suggested that they would like to be able to offer longer-term offtake agreements, but that new models were being explored for this.

Mr. Jones passed the floor to Ms. Nyitrai for an opportunity to respond, where she made clarifications on end-use applications for hydrogen, as well as electrolyser use as regards a Delegated Act being released for public consultation as part of the May 18 package. Mr. Jones then closed by thanking the speakers for their contributions and reflecting on how the debate on hydrogen has progressed from opinions to evidenced-based positions over the past 18 months. He returned to the issue of balancing imports and domestic production, particularly as regards cost implications and an internal market, as well as the need to prioritise European technology in the race for dominance of equipment manufacturing in the sector.