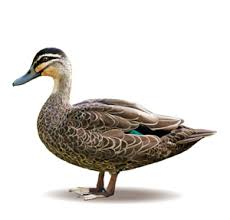 by C. Crampes and N. Ladoux

The increase in production of energy from intermittent renewable sources poses two problems for programmable energy plants: volume, because a reliable production capacity is needed to meet demands not covered by wind turbines and solar panels; and flexibility, because the need for additional energy can vary greatly over very short periods of time. In this article, we will leave wind turbines aside to focus on the alternating day and night cycles of solar energy production.

Draw me a duck!

There is nothing new about the fact that government policy on renewable energy creates tight constraints for the energy industry. The resulting need for additional production technology, flexibility of demand, external exchange and storage, and the necessary technical and economic adaptations of transport and distribution networks are all well documented. But to convey that message to the public and political decision makers, there was something missing. To fill in that gap… behold the Californian solar panel “duck”.

Let’s look at the recipe for the said duck, concocted by the California Independent System Operator (CAISO):

The following graph will give you an idea of what to expect. 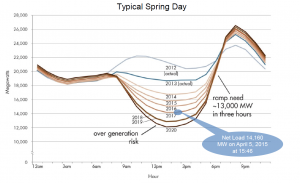 The recipe has been used, after adding a few of their own ingredients, by economists (C. Wolfram, M. Fowlie) and in the media (The Economist). CAISO also used it to argue that flexibility should be an integral part of the definition of the balance of energy resources. The word “typical” in the title of the graph might be a little exaggerated. The day was probably not chosen at random. Nevertheless, the graph sends a clear visual message about what everyone already knows: we need increasingly less programmable production in the middle of the day because solar power takes over, while we need increasingly more programmable production at the end of the day once the sun goes down.

We performed the same exercise in France by consulting our usual supplier, RTE-éco2mix, which offers fresh high-quality “produce” (available in the “data download” section). We opted for the beginning of July, and calculated averages for Tuesday, Wednesday and Thursday (to avoid heterogeneous weekend results) and by taking the first or second week of the month (to avoid the Bastille day holiday on 14th July). The result is shown in the graph below. 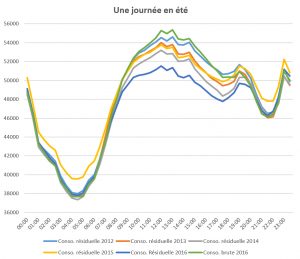 You have to admit that the French duck pales in comparison to the American version, especially as we added nothing to the belly to accentuate the visual effect. The result looks more like a gaunt camel, or a boa constrictor caught in mid-digestion, than a duck. Perhaps it has a case of bird flu! Nevertheless, you can make out the same two problems outlined by CAISO: i) the animal’s belly is getting fatter, and ii) it is raising its head.

The arrival of the solar duck (not to mention its wind turbine cousin, which is even more erratic), is causing severe disturbances in the energy farmyard. The high peak shows that the Californian sun goes down at the same time as consumers get home and turn on all their domestic appliances, in particular air conditioning, and plug in their electric cars (for those who own one). Increasing non-solar power production within a very short period requires operational maintenance of a highly flexible production capacity.

The second issue is the duck’s growing belly. It assumes that conventional power plants will reduce their production capacity. The problem is that those plants need to produce a minimum amount in order to operate. The staunchest supporters of renewables will simply reply, “Close them then!”  But we need them once the sun goes down. So what should we do? Should we stop injecting too much solar energy into the grid, invest massively in storage to reduce our reliance on programmable power plants at the end of the day, import/export between east and west and use the time difference to our advantage, or discourage consumption at the end of the day with higher prices for consumers?

No ducking the question

The solution is obviously to combine all of the above suggestions. Among all the documents published by the European Commission in November 2016 under the title Clean Energy for all Europeans, all of these ideas are listed. Here, we would simply point out that, when they use power production facilities, transport network managers are no longer required to prioritise renewable energy sources of production, except for small facilities (art. 11-1 of the proposal for a regulation on the internal market for electricity). Moreover, the law provides no specific rules to support renewables but their funding is supposed to come mainly from the electricity market. In France, the law on the energy transition for green growth implemented a revenue supplement, which partially substitutes the purchase requirement. A fixed supplement would have put producers using renewables in touch with price signals. However decree No. 2016-682 provides for a variable supplement to fill the gap between the market price and the target price set by the sector. Producers will therefore receive a guaranteed income, which suggests that the duck is likely to get even fatter.

In this article, Suamy Gabriela Pérez Ortega explores how renewable energy enables a more sustainable approach to mining in Peru.…