/  Energy & Climate /  Gas /  Between two regulatory packages: Fit for 55 debate is paving the way to the EU Hydrogen Package

Between two regulatory packages: Fit for 55 debate is paving the way to the EU Hydrogen Package

This is the first installment of the Topic of the Month: Decarbonising Gas Markets 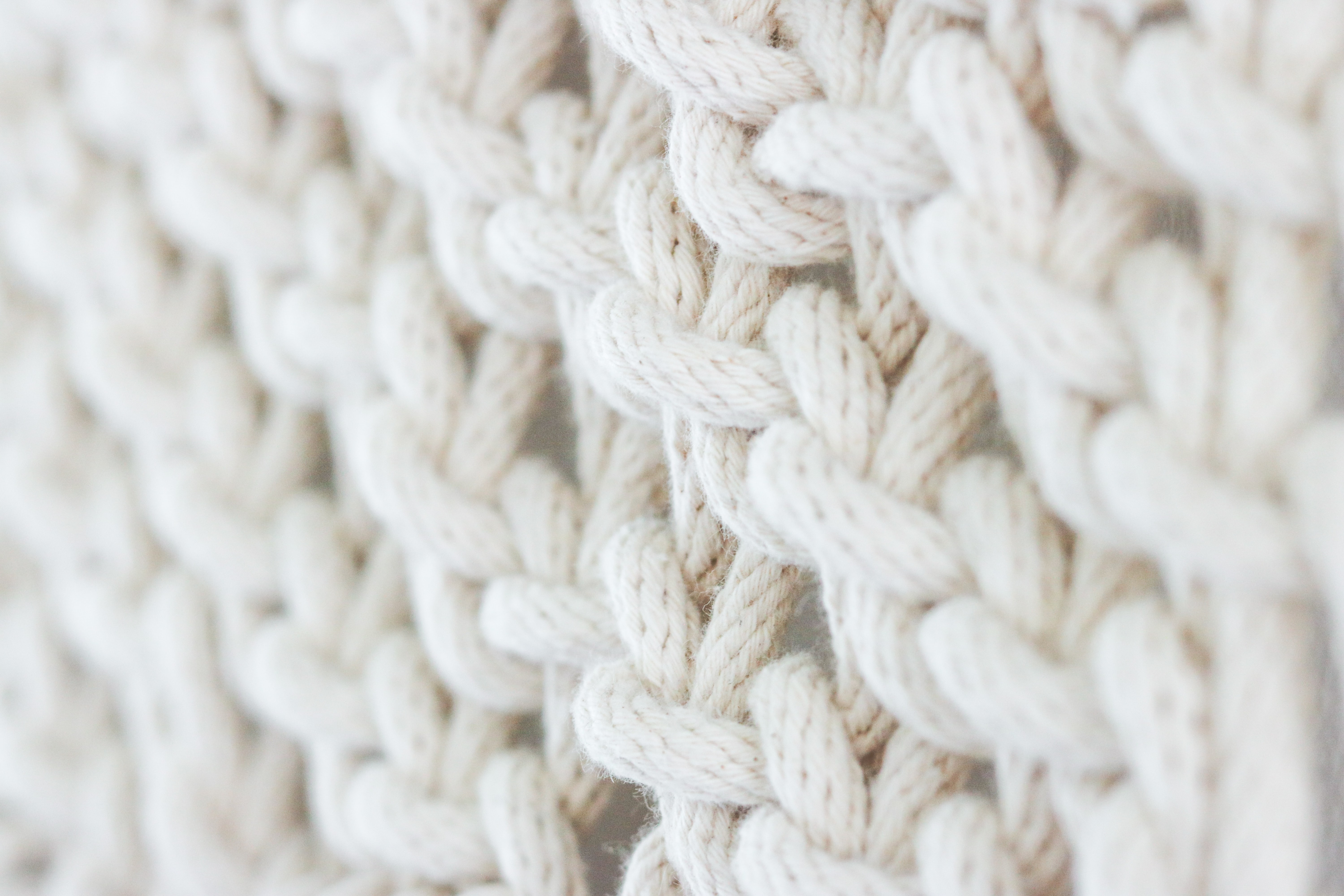 There is an EU Green Deal ‘braided rope’ connecting the Fit for 55 Package (FF55) released in July and the upcoming, much-awaited hydrogen and decarbonised gas markets Package (Hydrogen Package). The rope has at least three threads: 1) Greening the EU energy economy, 2) abating GHG emissions (including CO2 and methane), 3) Protecting the interests of EU citizens.

These threads have just passed through the needle of COP26.

The Fit for 55 package, published on July 14th, is made up of 13 cross-cutting legislative proposals including 8 revisions of existing legislation and 5 brand new proposals– ranging from aviation to renovation of buildings, maritime transport, and forestry.[1]

Across sectors, the FF55 aims to create the conditions for a more sustainable economy, ultimately benefitting EU citizens. In this direction, arguably the most significant proposal is the revision of the Renewable Energy Directive[2] – which points at an increase in the share of renewable energy in final consumption from 32,5% to 40% by 2030. In particular, sectoral targets for RES share are proposed for: buildings (49%, indicative), heating and cooling (+1,1% increase, binding), transport (14% RES share in transport fuels, binding) and the industry (+1,1% annual increase, indicative, and 50% of feedstock hydrogen to be renewable, binding target).

The new targets are ambitious, especially if we consider that the current definition of ‘renewable energy’ included in the REDII art.2 still largely includes RES-e sources only so that ‘renewable energy’ basically means ‘renewable electricity’ at present. The so-called renewable or green gases (including hydrogen) albeit having been at the centre of energy policy and regulatory discussions for the last three years, are still in search of a clear legislative framework. DG ENER has, however, recently and consistently reassured that the upcoming Hydrogen Package will finally provide the framework for the integration of renewable and low-carbon gases. This will likely cover the definitions for different gases, and potentially include a framework of measures to support the development of clean gases or molecules (particularly hydrogen).

We can conclude that the FF55 package holds an end of the first “Greening the EU energy economy” thread by providing for a more ambitious role of ‘renewable energy’ in the EU energy mix as well as making consistent references to hydrogen throughout.[3] The upcoming Hydrogen Package holds the other end of the thread and is expected to complete the picture on the gas side.

Both in the name and in the intentions, the scope of the FF55 package consists, ultimately, in ensuring that Europe is on track to meet its CO2 abatement targets at 2030 – i.e. -55% reduction compared to 1990 levels. The Emissions Trading Scheme (ETS) reform as well as the introduction of the so-called CBAM (Carbon Border Adjustment Mechanism) go in this direction.[4]

The reformed ETS results tightened (with a lower GHG emissions’ cap and fewer allowances) and extended in scope to other sectors – see table below: 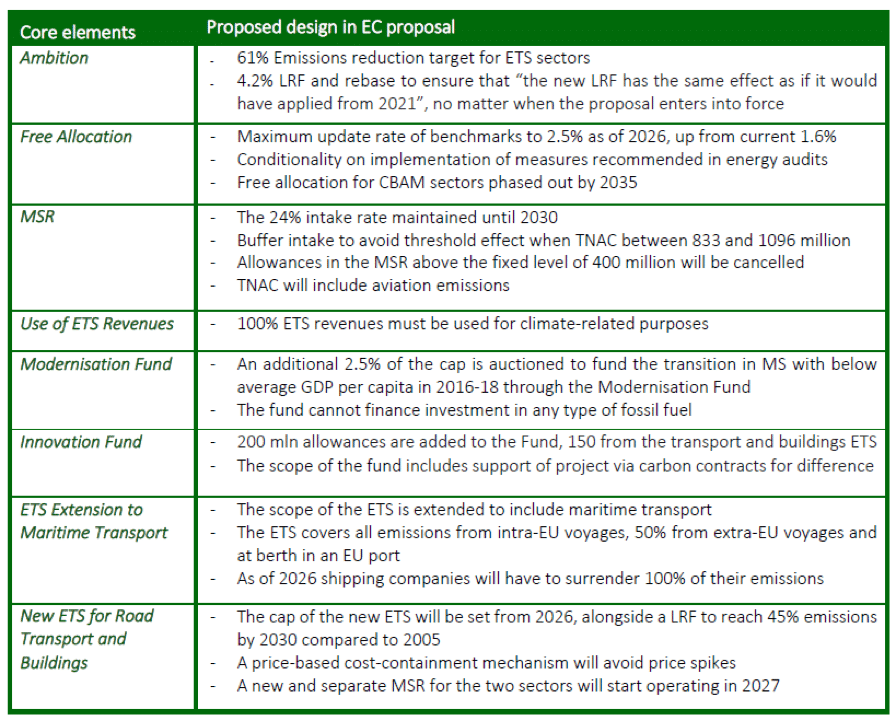 The CBAM is a new carbon tax applying to imports of specific goods (such as cement, iron, steel, fertilisers and electricity), which should compensate for the level of GHG emissions embedded in those goods, priced at the prevailing ETS price.

As we will discover in the second and third article of this series, methane emissions have been in the spotlight at the recently concluded COP26, where the EU and the US launched a Global Methane Pledge aiming to cut man-made methane emissions by 30% by 2030, compared to 2020 levels. The issue of methane emissions has attracted growing attention in the fight against climate change, due in part to the opportunity for meaningful and cost-effective near term reductions to global temperature rise.[5] The EU has become a world leader in tackling methane emissions via a number of initiatives in this field, such as through the EU Methane Strategy and the establishment of the IMEO[6].

Differently from the FF55 which is de facto a ‘Climate package’ – the upcoming Hydrogen package is not expected to address GHGs abatement with any specific measure, although the carbon content of hydrogen resulting from its Life Cycle Assessment will certainly be a key parameter for the expected definitions of ‘renewable’ and ‘low-carbon’ hydrogen. One common element to most (if not all) of the proposals for a ‘Gas taxonomy’[7] discussed in the last few years, including ours, consider GHG emissions as the main parameter to distinguish between gases.

We can thus conclude that the second thread connects the FF55 and the Hydrogen package via the so-called ‘gas taxonomy’ definitions – which, once established, are meant to play a fundamental role. Indeed, such definitions are going to reference a number of parallel EU legislative initiatives also beyond the FF55 – such as the EU Taxonomy Regulation’s Delegated Act[8], as well as the revised State Aid Guidelines (CEEAG)[9].

The Hydrogen Package will have the challenge of aligning or at least harmonising the different reference points for the classification of gases, establishing a common taxonomy valid for investment decisions, state aid guidelines, and sector regulation.

While most stakeholders applauded the gigantic efforts of the EU Commission in putting together such a  comprehensive and ambitious proposal, including FSR, the debate has quickly evolved into a discussion surrounding the potential social and economic costs of FF55. A recent FSR paper characterises the FF55 package as “the most ambitious and coherent decarbonisation package ever seen”, but with a “very significant impact in terms of cost on the industry, and above all on citizens”.

The industry will be called to face significant challenges. Some challenges are linked to the pressure to renovate their systems in order to meet the efficiency and RES targets on consumption, as well as stronger carbon pricing and expanded scope of the ETS.  The inevitable increase in costs associated with these aims, at least in the short to midterm, will need to be carefully accounted for under the scope of the CBAM to protect the industry from imports originating in markets with weaker or no GHG regulations.

Both types of challenges will likely result in an increase in the prices for products that such industries provide to EU consumers. This will add up as part of the cost pressure that citizens will have to bear, including also the unavoidable increase in the cost of energy (particularly in electricity, heating, and transport) due to the gradual shift from fossil fuels to renewables.

“We are asking a lot to our citizens and the Member States. And we appreciate the challenge that lies ahead” said Commissioner Simson at the ITRE committee the day after the Package publication. Nevertheless, she maintained “Ultimately, these proposals will bring untold benefits to people and businesses across the EU. Especially when it comes to energy”.

The FF55 package does include measures to safeguard the EU citizens and mitigate the impact of the energy transition on them. The main vehicle for this is the new Social Climate Fund (72.2 billion for 2025-2032) which insulates citizens most sensitive to price changes. Such initiatives aim to ‘leave no one behind’, one of the EU Green Deal mantras.

The upcoming Hydrogen Package will dedicate special attention to consumer engagement in the RES and low-carbon gas markets”.[10] Consumers will need to be informed of the ongoing changes and the impact that those will have in their daily lives, for example, the difference between the various commercial offers and the instruments to protect themselves from potential ‘greenwashing’. Finally, they will need to be empowered in their choices and have access to transparent information regarding their energy consumption. In these aspects, the Hydrogen Package will likely mirror some of the provisions already existing in the electricity sector.

Such provisions are meant to pair with the FF55 measures mentioned above. Insulating EU consumers from the costs of the transition should go hand-in-hand with allowing the same consumers to engage and make well-informed choices regarding their energy consumption and ultimately, their role in a decarbonised economy.

[1] For a useful summary of the main provisions: Fit for 55: EU rolls out largest ever legislative package in pursuit of climate goals – Florence School of Regulation (eui.eu)

[3] Including through (i) the revision of the alternative fuels infrastructure directive (AFID), (ii) the amendment of the regulation setting CO2 emission standards for cars and vans, (iii) the new FuelEU Maritime proposal, (iv) the revision of the Emission Trading System (ETS), and (v) the revised Energy Taxation Directive (ETD).