The FSR and partners will award two full scholarships to the FSR Summer School on Regulation of Energy Utilities and five additional free seats to our courses under the 6th Ana Aguado Scholarship Award. 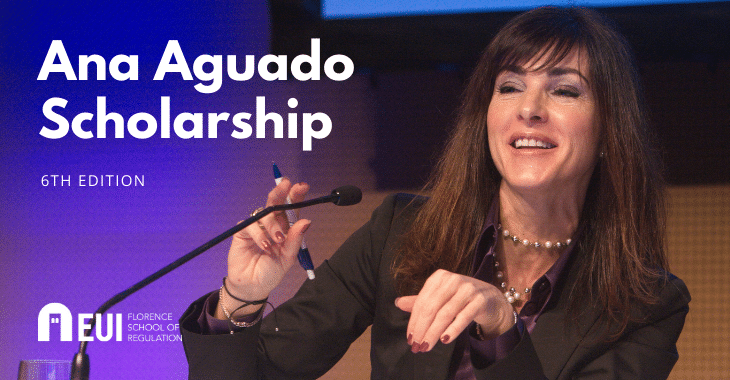 Under this joint initiative, two student Scholarships are offered by the above-mentioned Partners for participation in the Summer School on Regulation of Energy Utilities held by the FSR from 4 to 8 July 2022 (dates to be confirmed). Depending on the evolution of the pandemic, the 2022 Summer School will either be organised as a 1-week residential course in Florence or as a 2-week online webinar series.

The Partners will allocate five other candidates ranked after the two winners with the opportunity to attend for free one FSR online community training courses of their choice. These five free seats will be valid for courses starting between April 2022 and July 2023.

Applications should be sent to claire.boutry@edsoforsmartgrids.eu by 28 February 2022 (by midnight CET) and include the following documents in English (format and maximum length of the documents must be respected to be taken into consideration):

Please note that any candidate not respecting the maximum length of the Motivation Letter or the Short Essay will be excluded from the selection process.

Candidates should meet all of the following criteria. If just one of the criteria is not met, candidates will equally not be considered as eligible:

A committee composed of representatives from the above-mentioned Partners will assess all applications received and select two candidates by 21 March 2022. The scholarships will be also officially announced during the Annual Sustainability Conference organised by the FSR in Florence, Italy on 23-24 June 2022, subject to the evolution of the epidemiological situation.

Interview with past winners

Who was Ana Aguado?

Ana was Secretary General at EDSO for Smart Grids from October 2014. Prior to joining E.DSO she was CEO of the Friends of the Supergrid and held positions in the European University Institute as Special Advisor to the Communications and Public Relations Unit; in ETSO, the European association of transmission system operators (predecessor of ENTSO-E) as Secretary-General, in Eurelectric as Head of Unit for regulation and at the European Commission.

Ana was a passionate and enthusiastic person always on the front line for all major struggles in the energy sector. During her career, she was very attentive to students’ requests and needs, strongly believing in the importance of education for future generations.

Previous editions of the scholarship: