Towards an EU-wide Energy System Integration

Highlights from the online event: The different dimensions and challenges of energy systems integration 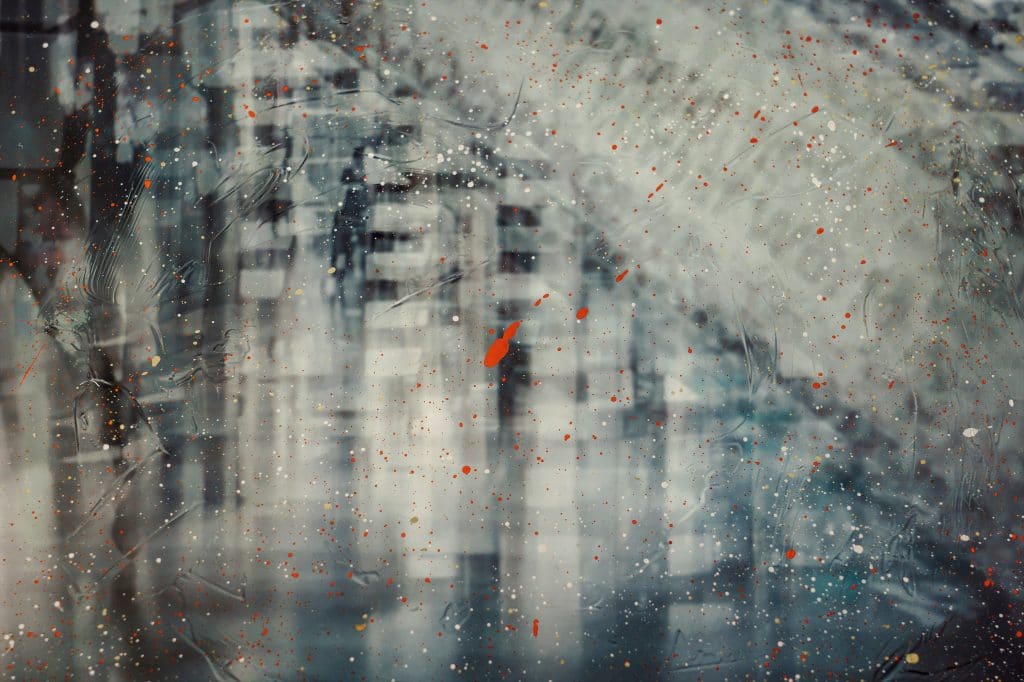 Related
event The different dimensions and challenges of energy systems integration
event What do we know about the costs of EU decarbonisation?
course Evolution of Electricity markets in Europe

This edition of the #FSRinsights series was organised around an ongoing research being conducted by Golnoush Soroush and Prof. Jean-Michel Glachant on Energy System Integration. Prof. Anne Houtman from Science Po and Prof. Tooraj Jamasb from Copenhagen School of Energy Infrastructure (CSEI) were the two academic experts discussing the research. Prof.  Houtman, specialized in EU’s climate and energy policy, focused on the policy perspective of implementing an EU-wide energy system integration strategy. Prof. Jamasb, instead, focused on economic and regulatory aspects of having an integrated energy system.

Here are some take-aways from our online event.

The first question helps identifying whether we are talking about the integration of sectors, vectors or modules. Modules, as defined in institutional economics, are autonomous parts or steps of a system/process which can also interact with other autonomous parts or steps of the system/process. As more and more independent segments are being created in the energy sector, it seems that this sector is becoming more and more modular and it should be these modules that would integrate with each other.

The second question helps identifying the dimensions at which the integration would happen. Before discussing the potential dimensions the following question was asked from the audience:

Which dimensions are the most important for energy systems integration?

The results of the first polling question to the audience can be found below. 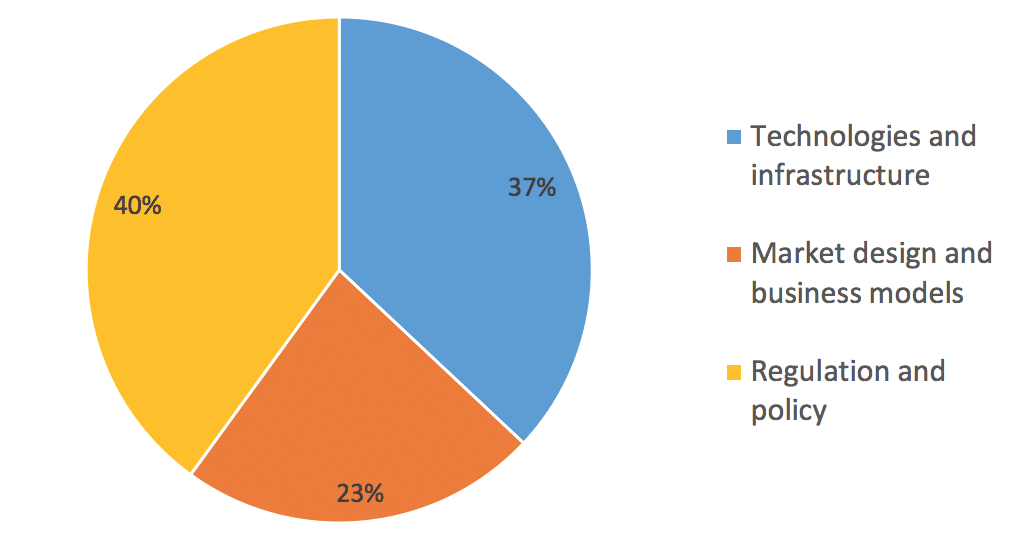 Finally, it is noted that integration could follow three steps: the technology/infrastructure roll out, identification of specific integration dimensions and alignment of these dimensions with the general frame.

After the presentation by Golnoush we asked for the opinions of our academic experts.

Prof. Houtman kicked off the discussion in the first round by noting that additional effort together with a much higher amount of investments will be required to meet EU’s 2050 climate target under the Green Deal. She then argues that besides increased efforts and investments, enhancing efficiency is the most important step towards meeting climate targets and it is the real driver for implementing energy system integration. In other words, not allowing energy waste or at least decreasing it, as is the goal of ESI, will have a direct impact on improving efficiency, quite compatible with EU’s ‘efficiency first’ principle. After a short discussion of policy aspects, Prof. Houtman talked about the role of corresponding legislations and regulations in the EU to allow energy system integration. While also talking about a number of notable existing EU climate and energy legislations, she mentioned how revisions of the Energy Efficiency and Renewable Energy Directives could enable and foster the electrification and decarbonization process which will lead to an increased need for enhanced coordination between different sectors.

Prof. Jamasb recognized the need for conceptualization of energy system integration to avoid misunderstandings due to existence of too many different interpretations. He considers energy system integration to have two different roles: a) to foster energy transition and b) to facilitate the coevolution of systems. Further, Prof. Jamasb argued that we should move away from focusing only on technological aspects of energy system integration and start to talk more about regulatory, policy and business model aspects of it, as they will act as the road towards sector integration. He also reflected on the polling question, debating that all the mentioned dimensions are equally important in implementing ESI (ex. to capture the value of an infrastructure we need to have the right market, policy, etc.). The potential of integration happening at DSO level rather than TSO level and the fact that integration could happen at the distribution level were other issues which were mentioned by Prof. Jamasb.

Role of states was another topic that was addressed by Prof. Jamasb. He argued that as most of the integration would happen at regulated networks and systems, institutions will play an important role and they might need to be revisited. Moreover, both Prof. Houtman and Prof. Jamasb noticed the fact that energy system integration from the demand side perspective has not been discussed enough while demand side forms a significant part of the energy system both at present and future.

The second round of the discussion was started by Prof. Houtman addressing the role of third countries in implementing ESI in the EU. She argued that not only there already exist a strong connection between the EU and other neighbor/non-neighbor countries but also the revision of the existing legislation will recognize such a connection. This could be the case especially for the revision of the TEN-E Regulation, addressing infrastructure interconnections which is a pillar of ESI as well, and also for the provisions regarding guarantees of origin. These reflect the coordination needed at the EU level but do not degrade the role of national governments and regulators. Prof. Jamasb agreed that more coordination is needed between the integration efforts (regulation, policy, etc.) at the EU level and the national level but also mentioned the importance of standardization of technical aspects across the borders (digitalization, data ownership and exchange, etc.).

The role of households and citizens

Reflecting on a recent tweet from Commissioner Simson on energy system integration, Prof. Houtman highlighted what she thinks to be the missing points in the discussion around ESI. She believes that while literature emphasizes on the technological aspects of ESI and the Commission focuses on the regulatory and policy aspects, the role of households, citizens and the residential sector is understated. She argued that first, we need to understand what people are ready to accept and what they are ready to do in practice to help achieving climate objectives. Second, to significantly increase participation of households in the energy transition process and in the future energy system, more services and more information should become available to them. This also includes making data available to consumers to open some space for emergence of new business models. And third, communication at local level is required to increase the household level contribution to achieving climate objectives.

The role of investment in R&D 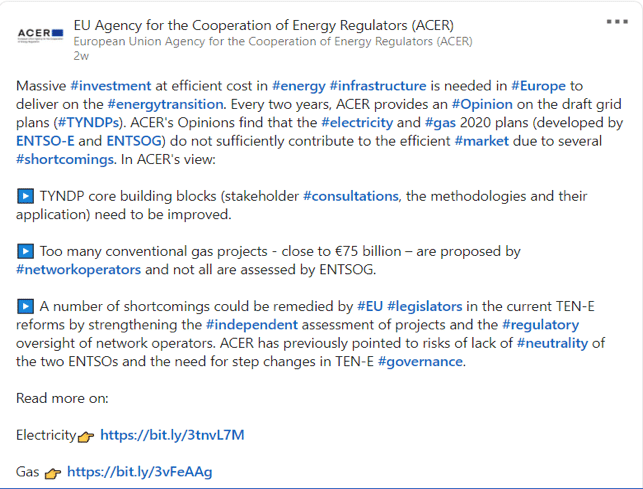 Prof. Jamasb reflected on the recent opinion by ACER which examines the TYNDPs by ENTSO-E and ENTSO-G, stating that these plans suffer from some shortcomings and the proposed infrastructure investments do not contribute to establishment of a cost-efficient market. He highlighted some shortcomings of current infrastructure investments as well as current R&D projects. These shortcomings include, but not limited to, the fact that current investments in the infrastructure are fragmented; only a small fraction of investments are allocated to R&D (both for technical topics and socio-economic ones); a clear communication instrument does not exist to share the results of research projects. This means that while we might reach our transition goals or might get an integrated energy system, with R&D lacking enough support the road to achieving these targets might not be the most cost-effective one. Therefore, role of R&D and investment in innovative solutions should be taken seriously.