On 5 October 2022, the FSR debate ‘Capacity subscription contracts for the electricity markets’ discussed the potential of capacity subscription contracts, a demand response measure, to contribute to the creation of the flexibility that the energy market will increasingly require to respond to growing renewables penetration and external energy supply shocks. These contracts would allow consumers to have a certain degree of choice regarding the level of energy continuity and security they require. Alberto Pototschnig (Executive Deputy Director, FSR) started the debate by introducing the topic. He emphasised that this was by no means a novel issue. Indeed, capacity subscription contracts have attracted a considerable amount of scholarly attention in the past. However, the Russian invasion of Ukraine and the ensuing gas supply disruptions in Europe have lent new saliency and urgency to the issue of demand response. Prof. Pototschnig then welcomed the experts giving the opening presentations, Michael Pollitt (Judge Business School, University of Cambridge) and Laurens de Vries (TU Delft).

Prof. Pollitt gave the first opening presentation. He started by emphasising that consumer involvement in the retail energy market touched on a fundamental economic debate about the degree of choice that consumers should be given. Indeed, it would be rather extreme to conceive a spot market in which consumers are confronted with excessively granular prices, and research shows that consumers value simple pricing and do not want to face this degree of detailed decision-making. While a truly nodal system thus does not seem sustainable, quantity rationing could be an option to elicit a demand response from consumers. Similar to how consumers might choose their internet pricing plan, consumers might be asked whether they would be willing to accept that they could have their power level turned down at certain times, and arrange for a priority ordering of their devices in such a situation. Alternatively, they could choose to pay more to guarantee a certain level of supply continuity. It would also be possible to envisage a hybrid system, in which traditional contracts remain available, but would be more expensive than contracts that contain some degree of quantity rationing in crisis situations. Another option could be that a single household might sign different contracts, with one contract guaranteeing supply for core services, and another contract, that contains an element of quantity rationing, is signed for the fast charging of an electric vehicle, for example.

In the following presentation, Prof. de Vries indicated that the capacity subscription debate had evolved over time and now has to operate within the dual constraints of generation adequacy and system adequacy. While short-term electricity markets remain the most efficient coordination mechanism, it is now uncertain whether prices are also the best driver for long-term investment. Events such as the 2008 financial crisis and the 2011 Fukushima nuclear disaster, for example, completely turned around German energy policy and therefore prices in continental Europe as a whole. The pandemic, and the current European energy crisis, as well as events such as the 2021 Texas power crisis, contribute to a situation where there is no market equilibrium.  Given these external shocks, the interests of consumers and investors diverge, with consumers more in favour of hedging and having some buffer in the system to protect against shocks. Capacity subscription would allow consumers to buy the capacity they need during scarcity events. Prof. de Vries argued that this should probably evolve into more of an option contract, in which the consumer is always able to buy a certain amount of energy at a certain, pre-agreed price from a supplier. This would need to be regulated so that consumers actually conclude these contracts and producers have the capacity required. The regulatory model for this could be broadly similar to that for health insurance, where mandatory insurance is needed to make sure that consumers are protected sufficiently. The advantage of this system over existing capacity markets is that it allows consumers to decide for themselves how much capacity to contract. This model would also guarantee a firm income to generators, which is crucial in an energy system that is becoming increasingly capital-cost driven as a result of the phasing out of fossil fuels.

In his intervention, Mr Claes agreed that electricity was a special product which might warrant innovative solutions, but he also stated that, from a consumer perspective, he was wary of any solution that might delegate difficult decisions about energy supply to the consumer. From a consumer viewpoint, Mr Claes argued that it would be preferable to stick with the current model and leave the supplier responsible for making these decisions. However, while not wholeheartedly in favour of capacity subscription contracts, Mr Claes stated that he was not fundamentally opposed to such a solution. This should only be something to be considered in case of serious problems with the investment climate or for guaranteeing the security of supply.

Ms Kutin agreed with this point, stating that energy experts sometimes tend to forget that most consumers are not energy economists or engineers, and do not have the time to make complex choices when it comes to the energy capacity they may need in case of supply shortages. Instead, what consumers need are transparency and simplicity. It is important to furnish consumers with clear and accurate information so that they can take an informed decision. This is true in general, but even more important regarding innovative energy solutions, which can be complex and unfamiliar. It may well be that we are at the cusp of a cultural change in how consumers engage with energy, but such a transition needs to be handled with great care, and consumers must be kept informed at all stages. If we are facing acute energy shortages, then products like intelligent assistance will become important, but they should be put on the market at the right price.

In her remarks, Ms Haasová indicated that we are currently in a period of rapid change, but that it is important to create the right organisational, economic and regulatory conditions in order to effectively use demand response tools, such as capacity subscription contracts. It is necessary to build a system that is able to communicate to household consumers when flexibility is needed from them. The supplier has to contribute to this organisational challenge and gather information about consumer readiness to engage with these demand response solutions, and about the right pricing for such mechanisms. Ms Haasová also raised the issue of data protection and data handling in an energy system that is increasingly digitalised and reliant on ‘smart’ meters and devices. This data also needs to be carefully analysed in order to keep the system as consumer friendly as possible.

After these statements by the panellists, Prof. Hancher directly involved the audience in the debate by putting a series of polls to them. A first poll asked the audience how they saw the importance of capacity subscription contracts for future energy market design. The response did not give a strong indication, with the largest share of participants (35%) claiming that these contracts are likely to be a useful, but not essential, a feature of the energy market of the future.

The results of the final poll revealed that participants considered both behavioural and technological factors to be major barriers to the introduction of capacity subscription contracts on a large scale, with 39% voting for each of these options. 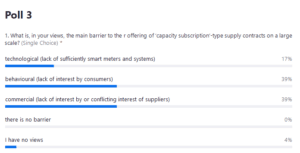 At the end of a lively discussion among the speakers and a Q&A with the audience, the debate concluded. Professors Hancher and Pototschnig thanked all participants and speakers for an informative, rich, and varied debate on this increasingly pressing topic.