This is the third installment of the Topic of the Month: A European Journey to renewable gas markets

The existence of markets incentivises price decreases from producers, while increasing demand, not only due to lower prices but also due to a better product in the sense of e.g. reliability and branding. Most of the economic theory on markets, focuses on existing markets with well-defined products. For biomethane, this is not given. Biomethane and other renewable gases in European countries are primarily traded through bilateral agreements, thus we cannot have a clear insight on the trading activities, which makes the current market rather non-transparent.

Leaning on the economic theory, and the Agency for the Cooperation of Energy Regulators’ (ACER) gas target model [1], we aim to organise and find a structure for biomethane trade in the EU. For this purpose, we use the methodology used for the development of natural gas market hubs as a starting point, since natural gas as an energy carrier, is the most similar to biomethane. However, biomethane and renewable gases have a sustainability dimension that is not prevalent for natural gas. Additionally, the natural gas market is by far more mature than the biomethane market. Therefore we need to adjust the approach accordingly.

We define a set of metrics in order to measure the readiness of biomethane trading activities to be facilitated in a separate trading platform (see figure 1). In the past, ACER [2] has used an approach in its European gas Target Model where two sets of metrics that quantify and measure the “market health” and “market participant’s needs fulfillment” of European gas trading hubs are defined. The analysis conducted by ACER shows that even with the well-developed gas market with its liquid trading hubs, most EU Member States are showing deficits regarding these metrics. This situation will look even worse for biomethane, without a trading hub, and with almost no insight on prices and trading activities. 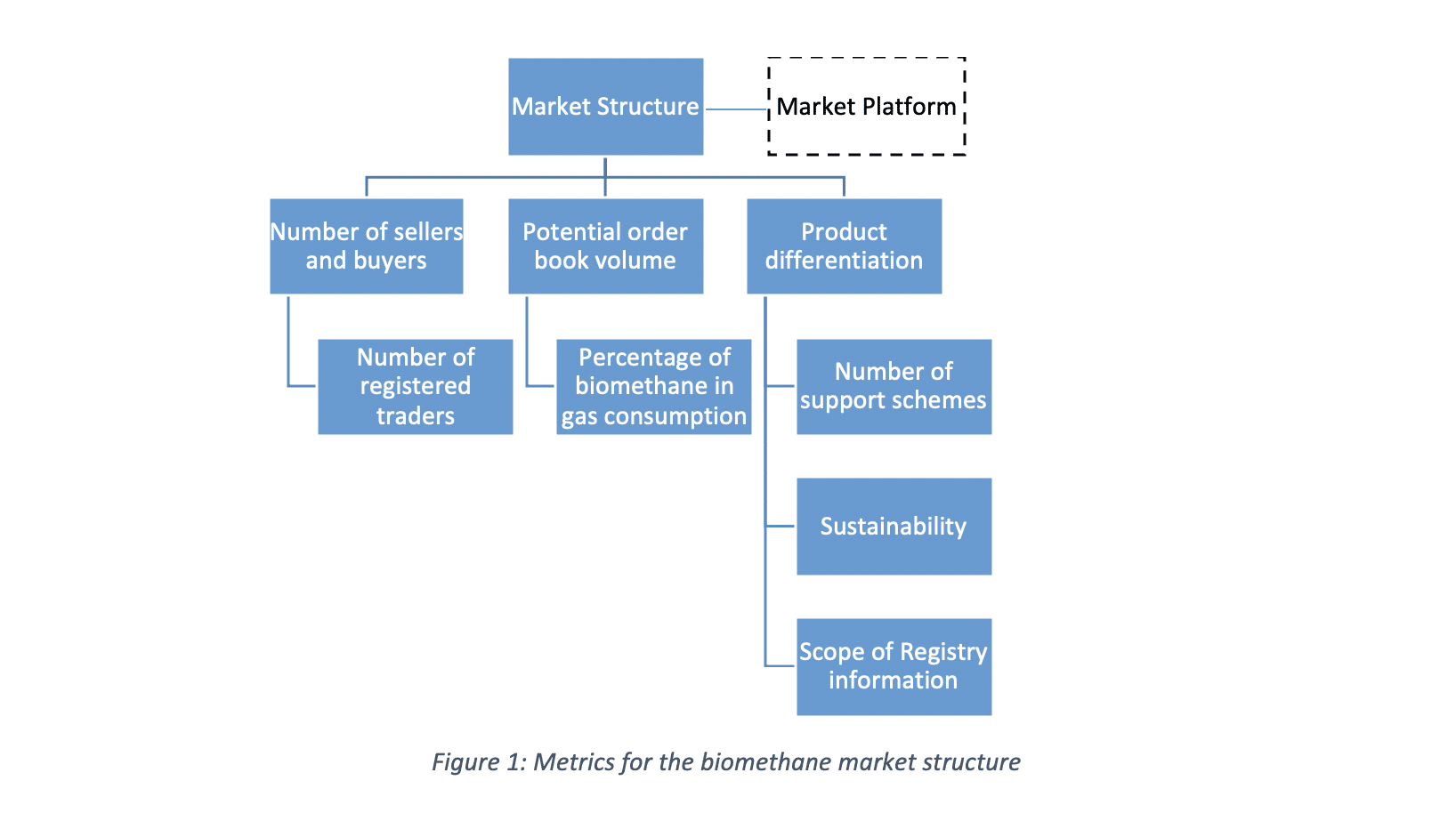 The ACER gas target model has included the order-book volume in its metrics for evaluating natural gas hubs. We use that metric, with modifying it to be the “potential” order book volume, which consists of the available volumes of biomethane available in the market. This can be reflected in the percentage of the gas consumption in the respective country, which is covered by biomethane.

We have defined three measurable metrics for differentiating biomethane in the context of this study: the scope of the biomethane registry, sustainability standards, and the number of differentiated products.

A biomethane registry is a documentation system serving the seller or buyer of biomethane to track and handle it as biomethane with a certain set of characteristics. This increases trust and improves the documentation along the biomethane supply chain [3].

National registry operators can further adjust and develop their registries to make them compliant with the EU RED mass balance system. This adjustment will be less cost and administration intensive, if the scope of the registry already entails all the parts of the biomethane supply chain, from feedstock production to end-consumption. Therefore, we use the scope of the biomethane registry as a metric for how close a chain of custody is to an EU RED compliant mass balance system. We use the whole biomethane supply chain as a benchmark, and observe the steps of the value chain that are included in the biomethane registry of the respective country.