The second installment of the Topic of the month: A European Journey to renewable gas markets 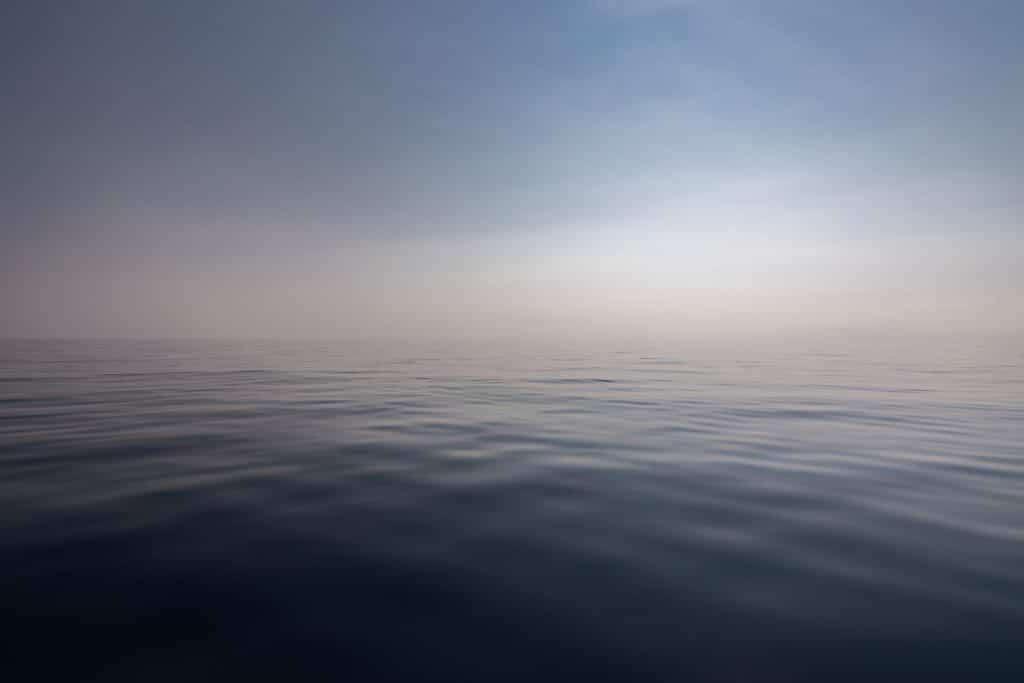 by Tara Amirkhizi and Maria Olczak

Under the EU RED I, biomethane used for electricity and heat production has not been subject to the same sustainability criteria as to when used for transport. There has been a consensus in the past that binding sustainability criteria would impose a high cost to these sectors, endangering their competitiveness [1]. Within the EU RED II biomethane falls under the category of biogas, and is no longer limited to the transport sector.

The Mass Balance System under this directive is a tool for ensuring the sustainability of biofuels. Under article 30, the EU RED II states:

“Where biofuels, bioliquids and biomass fuels[1], or other fuels that are eligible for counting towards the numerator referred to in point (b) of Article 27(1), are to be taken into account for the purposes referred to in Articles 23 [heating and cooling] and 25 [transport] and in points (a), (b) and (c) of the first subparagraph of Article 29(1) [Contributing towards the Union target and renewable energy shares of member states, measuring compliance with renewable energy obligations, and eligibility for financial support for the consumption of biofuels, bioliquids and biomass fuels], Member States shall require economic operators to show that the sustainability and greenhouse gas emissions saving criteria laid down in Article 29(2) to (7) and (10) have been fulfilled. For those purposes, they shall require economic operators to use a mass balance system…”.

We understand from this statement that the application of the mass balance system is necessary for biomethane to be counted towards the EU renewable energy targets and support in the heating and cooling sector, in addition to the transport sector.

In the EU RED II, the Guarantee of Origin (GO) scheme has been expanded as well to cover not only renewable electricity, but also renewable gases. The GO-scheme is a mean to prove to the end-consumer that a specific share of the energy she is consuming origins from renewable resources. The GO can be transferred independently from the energetic gas unit it has been issued for initially (Article 19 EU RED II). A GO issued for biomethane, does not contribute towards fulfilling national renewable energy goals. Thus, the EU RED II has split biomethane into two groups, with two separate potential values: 1) A renewable transport and heating/cooling fuel under the mass balance system, with GHG mitigation value for reaching the targets under Article 29 (1), and 2) A green added value to energy products, under the GO-scheme.

The introduction of biomethane as a new product in one separate market differentiates it compared to its substitute natural gas, which is necessary in order to be able to claim a higher price for biomethane so that the comparably higher costs for biomethane producers can be recovered. The sustainability of biomethane is a major factor in determining biomethane’s competitive value.

The sustainability of biomethane is documented and proven through its chain of custody[2]. Biomethane molecules and natural gas molecules are impossible to distinguish from another, since they are chemically the same. For biomethane producers to enter a common market that acknowledges the green value of biomethane, it is necessary to provide a system that enables its identification and the distinction of biomethane’s green value. For this purpose we use the chain of custody term according to van de Staaij et al. [2]. From the literature, we identify three major types of chain of custodies: Identity preservation (track and trace), mass balancing, and book and claim (van de Staaij et al., 2012; Bowe, 2013). Figure 1 shows the relationship between the physical flow, the consignment and the respective chain of custody. 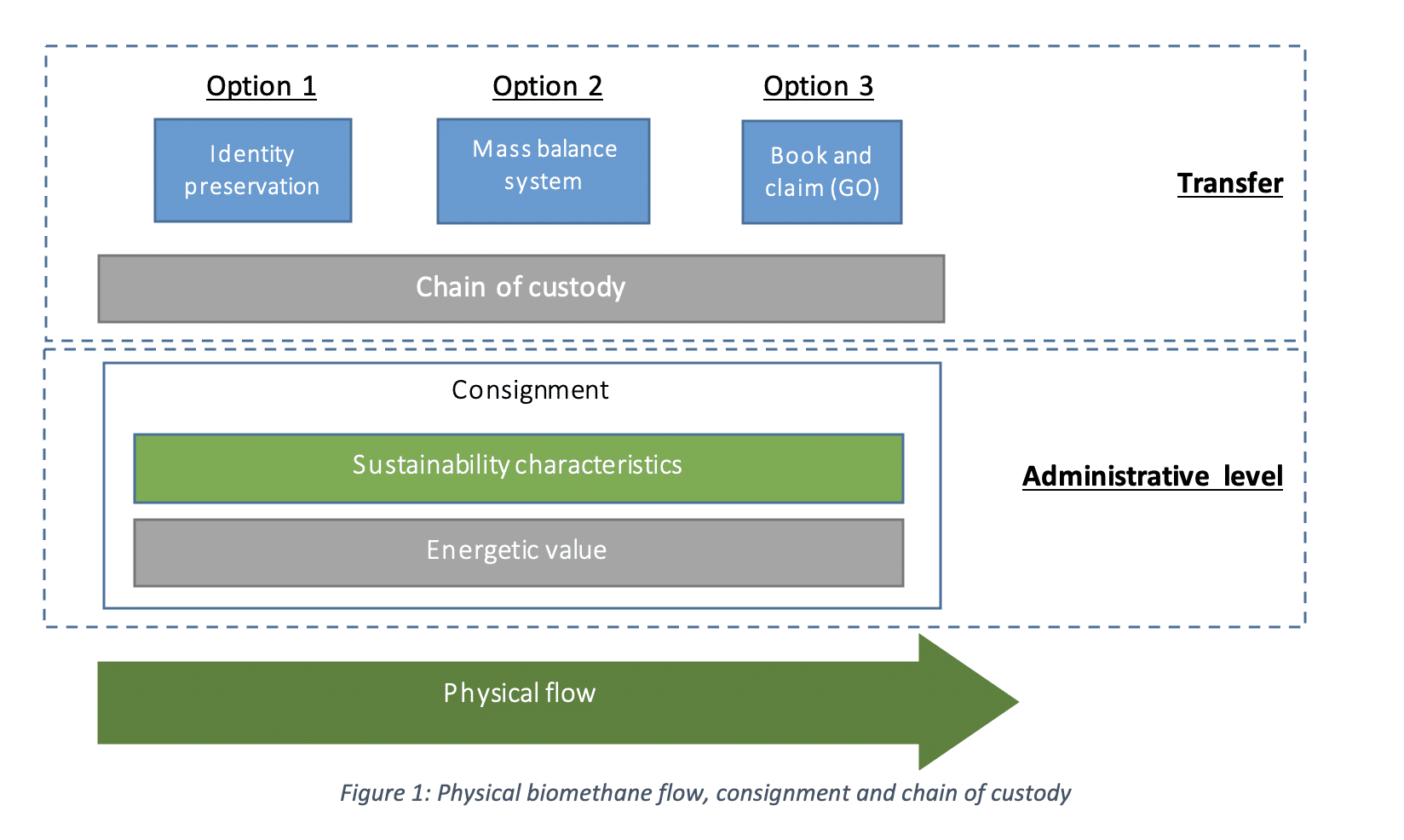 The identity preservation approach is only relevant for biofuels transported in separate vessels and trucks, not for biomethane flowing through the gas grid, which is the focus of this paper. The EU Member States are currently using two chain of custody types for biomethane injected into the gas grid: book and claim in the form of GOs and the mass balance system. The following sections describe these two approaches and their differences.

GOs are representing a book and claim system, which is separating the sustainability characteristics from the commodity (see figure 2). They show that the sustainable feedstock is added to the overall market, not to the bioenergy supply chain [2]. The GO-scheme according to Article 19 of the RED II is an example of the book and claim chain of custody.

In the mass balance system, the actors within the supply chain keep track of the amount of each consignment they are handling (see figure 3). This way they ensure that the amount of certified material exiting the supply chain equals the amount of certified material that has entered it, taking into account the conversion factors. One of the specifications of the mass balance system is that the physical product and its sustainability information are coupled throughout the value chain [2]. Implementing a mass balance system requires elaborate documentation of the physical biomethane transport, capacity booking in the gas grid, sustainability of the feedstock, and more. This is usually done either by a voluntary mass balance scheme according to the EU RED II, or an EU registered national system.

[2] A chain of custody “ensures that the fuel supplier is able to demonstrate that the biofuel they supply was made from feedstock at the other end of the chain that complies with the RED sustainability criteria.”(van de Staaij et al., 2012)

Status quo of renewable gas markets in the EU