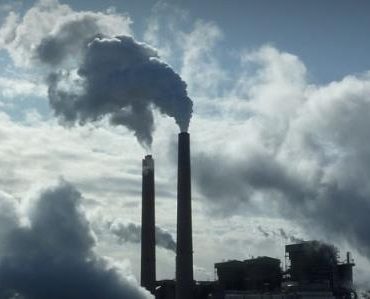 In her new article, The Clean Energy Package: Compromise on Provisions for Capacity Mechanisms, Professor Leigh Hancher (FSR; Tilburg University; Baker Botts), Per Ove Eikeland (Fridtjof Nansen Institute), and Berit Tennbakk (Thema) explore the new conditions for the introduction of capacity remuneration mechanisms by Member States as set out in the Electricity Regulation of the Clean Energy Package. Why were these changes introduced and will they be effective? Read the article here to find out more.

Background of the study

In 2016, the EU Commission proposed broad reforms of EU energy legislation (the Clean Energy Package). Included were new provisions in the Electricity Regulation (European Commission, 2017) setting out conditions for Member States’ introduction of Capacity Remuneration Mechanisms (CRMs): state support to new and existing electric power plants aimed at ensuring adequate capacity and security of supply. Several Commission proposals were highly contested, resulting in changes made after trilogue with the European Parliament and the Council (Council of the European Union, 2019).

Security of supply is a key dimension of EU energy policy, enshrined in art 194(1) TFEU as a ‘shared competence’ between the Member States (MSs) and the EU institutions. As a catch-all concept, ‘security of supply’ has often served as a convenient label for protectionist MS policies to mask an array of support measures for ailing firms. If an MS can convince the European Commission (EC) and ultimately the European courts that it is justified in taking certain actions in the interests of security of supply (for example, establishing capacity remuneration mechanisms), that line of argument will inevitably trump the EU’s plans for a single European energy market. The EC’s role is often reduced to fire-fighting or damage-limitation, i.e. ensuring that any national, unilateral action is as contained as possible and will not unduly undermine trade among MSs. However, this is not just a matter of single market ideology: purely national action is probably not as cost-effective as mechanisms that allow for cross-border participation in different national markets.

The rationale for introducing CRMs may not always seem convincing, as generation capacity in the EU has increased due to the growth of renewable energy sources (and a decrease of conventional power), while electricity demand and wholesale prices have decreased steadily since 2011. 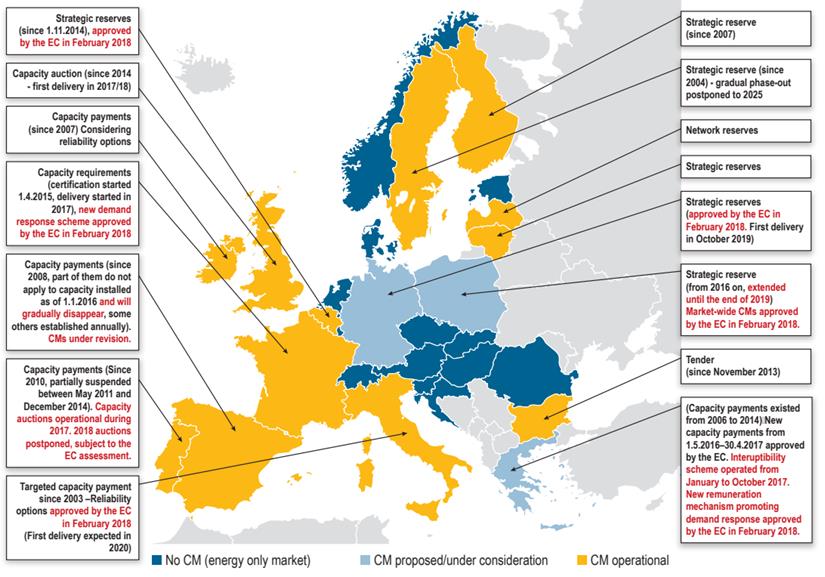 The outcome has been a situation of overcapacity in at least parts of Europe. However, the exponential growth of often heavily subsidized renewable energy production, combined with the ‘energy-only’ market model, has introduced a new justification for introducing CMs: the ‘missing money’ problem: conventional fossil-fuel plants increasingly find themselves in financial difficulties. Various CRMs have long existed in the MS as illustrated by Figure 1. In 2014 the EC adopted a set of guidelines outlining the main conditions it would apply in order to approve a CRM as compatible state aid. The 16 CRMs have all subsequently been reviewed and cleared under the treaty state aid rules. April 2015, the EC launched a Sector Inquiry under the treaty state aid rule to assess the various CRMs implemented and their consequences for competition and trade in the internal energy market, adopted as an associated document under the Clean Energy Package (European Commission, 2016). The inquiry found that many MSs had not adequately assessed the need or cost-effectiveness of these measures before introducing them. Some MSs had introduced three or more such mechanisms; many MSs had not applied a sufficiently rigorous assessment methodology to establish the appropriate level of security of supply before applying a CRM. The Sector Inquiry also confirmed the use of different metrics applied across MSs to set reliability standards depending on the adequacy assessment approach adopted – although some MSs had not even defined a reliability standard when introducing capacity mechanisms. The report of the sector inquiry concluded that capacity mechanisms should be open to all types of potential capacity providers – except for pure demand response mechanisms, given their ability to address market failures; and strategic reserves, as they are designed not to promote new Figure 1 CM implementation in Europe (ACER and CEER, 2018:71) generation capacity (Commission, 2016).

In February 2018, during negotiations on the Clean Energy Package, the Commission (DG Competition) gave state aid approval for capacity mechanisms in six MSs: Belgium, France, Germany, Greece, Italy and Poland. The Commission found that these measures would contribute towards ensuring the security of supply while preserving competition in the single market.

As the Commission powers under existing treaty state aid rules are essentially reactive to MS adoption and design of CRMs, these rules could not guarantee that specific national CRMs would be compatible with internal market objectives. They could not force a MS to choose a particular category of CRMs; would not ensure that the CRM had been chosen on the basis of transparent and harmonized EU criteria for assessing the resource adequacy problem, and would not regulate terms on which to ensure cross-border participation in national schemes.

The Regulation adopted after trilogue

The Commission’s proposals sparked intense debate on the role and design of CRMs and on methodologies and procedures for assessing resource adequacy and determining reliability standards. The chapter on CRM was not agreed upon until a final trilogue dedicated to it in late 2018. The final Regulation retained many of the Commission’s proposals. Some were given more specific content by the addition of new provisions; others were significantly changed. See our highlights below or read the article in full here.

Within the Council, member states were split on the need for CRMs, broadly reflecting different positions by the MSs that had already introduced such mechanisms and those that had not. The list of countries that had received approval of their national CRMs increased during the negotiations. Essentially, most of the major MSs had introduced and received approval of their various schemes. These MSs sought to protect their CRMs by avoiding a regulatory straitjacket while accepting a certain degree of Commission supervision as regards the state aid regime (letter of 4 September 2018 from EL, FR, HU, IE, IT, PL and UK.15 Only a minority of smaller MSs argued against the adoption of CRMs altogether. The EP tried to restrict MS choice of CRMs, preferring the strategic reserve but failed to change the Council position in the negotiations. The compromise also included retaining various Commission-proposed principles, to prevent CRMs from distorting the energy market – clearly a concession to those member states that fought against CRMs.

Prior to the penultimate trilogue meeting on the Electricity Market Regulation on 18 October 2018, 31 NGOs from across Europe urged EU ministers to ensure that CRMs would remain a last resort solution and would no longer subsidise the combustion of fossil fuels, coal in particular. However, that plea was not heeded, and the Council and Commission deferred to national demands to grandfather existing contracts so that coal-fired units could continue to contribute to meeting national adequacy targets at least until July 2025. The final text is thus a clear compromise between the sharply differing positions.