On 30 November 2022, a #FSRDebate discussed the regulatory challenges arising from current European efforts to achieve system interoperability in an increasingly digitalised energy market. Alberto Pototschnig (Executive Deputy Director, FSR) welcomed all speakers and participants and introduced his co-host Leigh Hancher (FSR; Tilburg University). Prof. Hancher presented the debate topic, stating that it was a discussion on an issue that is, on the one hand, very granular, referring to the new Framework Guidelines currently being prepared by ACER to enable the development of a Network Code on demand response. On the other hand, however, the broader initiative of the European Commission to develop a Digitalisation of Energy Action Plan seems to signal a more horizontal approach to data exchange and data management in the energy sector. Prof. Hancher then introduced the two speakers giving the opening presentations, Astrid Brunt (Statnett) and Sonya Twohig (ENTSO-E).

In her presentation, Ms Brunt said that the current transformation of the electricity industry entails both challenges and opportunities. While decarbonisation and decentralisation pose a challenge for system operation, digitalisation can offer possible solutions to these challenges. This leads to the question of whether we have legal instruments that are fit for purpose in an environment where continuous power supply and system resilience are dependent on digital solutions and data exchange. Ms Brunt identified several current systemic issues relating to data, data platforms, and information exchange. She then turned to the EU law pertinent to these issues. She outlined how, beyond the EU’s shared energy competence under article 194 TFEU, other aspects of EU primary law also need to be considered, such as the principles of subsidiarity and proportionality, and EU competition law. Regarding secondary sources of law, Ms Brunt considered the Electricity Directive and Electricity Regulation, but also the Data Act and Data Governance Act, as well as several Network Codes and Guidelines to be of relevance. Finally, tertiary sources of law, such as methodologies used in the implementation of Network Codes, CJEU case law and ACER decisions, also need to be taken into account to gain a comprehensive legal overview of this field.

Regarding demand response specifically, she stated that this offers a lot of opportunities, both in the short and long term. However, while the importance of demand response is widely recognised in legislation, policy documents and studies, there are currently no clear targets or plans for demand response at EU or Member State level, and demand response does not play a major role in any mature or liquid market in the EU. However, in Ms Brunt’s opinion, no major market restructuring would be needed to incorporate demand response. She concluded with an overview of the challenges posed by the complex, fragmented and interdependent legal framework underpinning data management in demand response, stating that compatibility inefficiencies may complicate integration of such technologies and that the Data Act and Data Governance Act were unlikely to be helpful in solving these challenges. While the Demand Response Network Code is unlikely to facilitate investment, it might contribute to solving some of these interoperability and efficiency issues.

Ms Twohig then shared some perspectives from ENTSO-E on the new Framework Guideline. ENTSO-E considers ‘deep digitalisation’ one of eight potential gamechangers in the transition to a carbon-neutral power system. Ms Twohig emphasised that, due to the multitude of actors involved in the operation of the transmission grid, close and efficient cooperation is essential. She said that the System Operation Guidelines have already harmonised the rules for the exchange of structural, scheduled and real-time data, and has been complemented by a methodology for the organisational aspects of state provisions (KORR). At the same time, various implementation and coordination challenges remain. In this sense, the Framework Guideline can be seen as an opportunity to facilitate the participation of new service providers at DSO level. New rules should complement the existing framework where gaps are found. The right balance between Member State flexibility and minimum EU requirements to support interoperability, scalability and simplicity should be struck. In this regard, ENTSO-E is concerned that the draft Framework Guideline contains very detailed requirements, whereas ideally it should be more high-level to ensure sufficient flexibility so that the implementation of new rules provides legal certainty and can be tailored to local specificities.

Mr de Wit stated that, with more and more large-scale renewable generation coming online, demand response is not something for the future, but is already being implemented to address current energy challenges. The increase in energy prices has further incentivised consumers to look to demand response as a way of saving money. The EU DSO Entity and ENTSO-E are working closely together to address the issue of data access and interoperability. Mr de Wit stressed that, in the view of the DSO Entity, the principles shaping the network code on demand response should be technology neutral. This would improve innovation and increase liquidity in the market, particularly on the distribution level. Giving transparency to consumers is also an important factor, and issues such as gaming could be addressed through solutions like long-term contracts. From a DSO perspective, the current draft Framework Guideline is too detailed and may not allow for enough flexibility, especially for small units. Hence, a step-by-step approach may be better suited to deal with demand response.

In his remarks, Mr Hartner emphasised that stakeholder cooperation is key to driving the work on the utilisation of distributed flexibility. He said that cascading capacity calculation and network security analysis require a lot of work by DSOs and TSOs, and that these calculations define the demand for flexibility. These calculations should thus be carried out first. Further, flexibility should be measurable at the connection point and customers should be able to decide what units are installed in their homes. This means that they should be free to switch aggregators and share data. Standardisation and interoperability will be crucial to enable this.

Mr Pasquadibisceglie said that data management had always been part of the work of energy regulators as a logical consequence of market liberalisation, but that the changes now introduced in order to meet the European Union’s ambitious decarbonisation goals result in new data management challenges. In particular, regulators must now find a way to accommodate the needs of network operation and commercial flexibility in the most efficient manner. Regulators should also balance the needs of DSOs and TSOs in this context, which can sometimes be diverging. A strong role for National Regulatory Authorities is needed to ensure effective interoperability.

Ms Altvater provided Eurelectric’s perspective on the Network Code on Demand Response. Eurelectric considers that the scope of the Network Code should be limited to congestion management and voltage control. It further supports the concept of a flexibility resource, but details of its implementation should be defined at the national level. Eurelectric is also in favour of providing data aggregation where possible. Ms Altvater also stressed that a transparent and public consultation process is important to guarantee proper stakeholder involvement in considering congestion management issues. The key principles of a sound regulatory framework should be interoperability and harmonisation; transparency; and privacy and data protection.

After the panellists’ opening remarks, Prof. Hancher put a series of poll questions to the audience. In the first of these polls, participants were asked whether they would agree with the statement that, while full transparency is important to support the development of liquid and efficient markets, the publication of granular data may lead to gaming and other market abuses. An overwhelming majority (93%) agreed.

The third poll asked participants about their opinion on the data exchange provisions in the draft Framework Guidelines. The largest share of the audience (45%) thought that data exchange between system operators should be bi-directional and limited to necessary data only, while 27% thought it important that the TSO receive all the data exchanged between grid users and the DSO. The same percentage of participants (27%) said that both TSOs and DSOs should determine what level of data exchange is necessary. 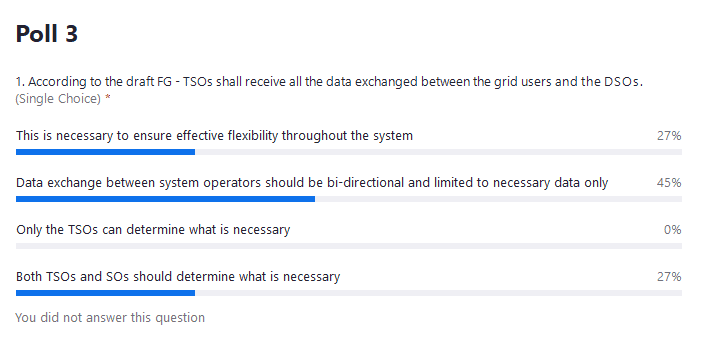 In the final poll, the audience was asked what they thought would be the best level at which to adopt interoperability rules. A majority of participants (67%) thought that the EU should adopt interoperability rules binding on all DSOs, while 22% said that such rules should not be adopted at EU level. 11% of participants, meanwhile, were in favour of a compromise solution.

A lively Q&A session ensued, at the end of which Professors Pototschnig and Hancher thanked all speakers and audience members for their contribution to this debate, the last such event in 2022. Both co-hosts looked forward to many more engaging and timely discussions in 2023.