Liberalisation of the EU electricity retail market was completed in 2007. However, the experience so far shows that many of the small (residential) consumers are unwilling to take advantage of the possibility of switching, thus possibly not fully benefitting from retail competition. The reluctance by a large share of consumers to switch supplier (stickiness) gives suppliers market power; moreover, instances of unfair commercial practices undermine trust in the liberalisation process.

The recent increases in wholesale energy prices found several suppliers – including providers of regulated services – inadequately hedged and led them to, or near to, bankruptcy.

At the same time, the Italian regulator is organising auctions to allocate (blocks of) small consumers who have been unwilling to leave the franchise market and choose a different supplier on the free market.

The Debate was hosted and moderated by Alberto Pototschnig (FSR). He also provided an introduction to the Debate, which was followed by opening contributions from Dr Guido Cervigni (DFC Economics) and Martin Crouch (4D Economics).

Dr Cervigni reviewed the experience with energy retail markets in the EU over the last 15 years. He started by referring to the frictions which have been identified in energy retail markets. He stressed that the main problems in the retail market seem to be linked to consumers’ reluctance to switch supplier. He then presented data suggesting that there is no correlation between the structure of the retail market and retailers’ mark-ups. Moreover, countries with heavier regulation seem to have attracted a larger number of retailers in the market. These unexpected results confirm that the main issues in the retail markets relate to the demand side. He then referred to the mechanisms used in different EU countries for protecting consumers and to the fact that, 15 years after liberalisation of the energy retail market, 90 million consumers in Europe are still supplied under regulated tariffs. In order to address the situation, all EU countries have introduced consumers’ empowerment tools. Dr Cervigni then reviewed the measures recently introduced to protect consumers from the recent energy price increases: direct support, reduction of VAT on energy bills and moving the cost of renewable support scheme away from energy bills. These measures are in some countries financed by the clawing back of intramarginal rent from generators. Looking at the future of the retail market, Dr Cervigni envisages a key role for flexibility providers which may be able to provide greater value to consumers than the traditional suppliers.

Mr Crouch then focussed on the retail market in Great Britain. He first presented the trends in supplier switching that show a wave pattern, with higher rates in the mid-2000’s and then again in the mid/late-2010’s, at the same time of the review by the Competition Authority and later on the introduction of price caps. This latest increase in switching was due to a number of new initiatives (new products, collective switching, …). Looking at price dynamics, the gap between the different prices available to customers in Great Britain could be as wide as £300 per year. Looking at the market structure, there was a gradual increase in the number of suppliers operating in the market in 2016 and 2017. Since then, a few suppliers exited the market; in most cases, this happened with these suppliers having a credit positions vis-à-vis their customers, which were difficult to recover, even though customers were always protected. Only now Ofgem is trying to tackle this problem. Looking at current price dynamics, regulated prices will increase by 50% in April 2022 and a further 50% increase is expected later in the year. The Government is intervening with lump-sum income support. Ofgem is responding with greater scrutiny for new entrants in the retail market, imposing rules ensuring non-discrimination between new and existing customers and a market stabilisation charge. These measures, in Mr Crouch’s views, show a lack of trust in competition by Ofgem. Finally, in terms of lessons learnt, Mr Crouch mentioned customers’ reluctance towards switching (which is seen more as a cost than a benefit, the unclear benefits of retail competition and the juxtaposition of lengthy price reviews which do not deliver their intended benefits versus knee-jerk reactions at times of crisis. That said, Mr Crouch believes that the future of energy is exciting, with digitalisation, decarbonisation and energy as a service, and that effective retail competition could be the best way to deliver benefits to consumers, but probably the form which competition will take in the future will be different from what we have seen until now.

Ms Lo Nardo reported on an experiment run by ARERA, the Italian NRA, last year. In Italy, households and micro enterprises can be supplied under a scheme referred to as ‘maggior tutela’ where the supplier of last resort was unidentified by law at the time of liberalisation and tariffs are set by the regulator. This scheme also supplies those customers who have not moved to the free market, which, in the residential segment, represent 35% of consumers. Instead, small enterprises could be supplied under a scheme referred to as ‘tetele graduali’, with suppliers selected through auctions. The auctions which were run last year were quite successful, with more than 30 participants bidding for the different geographical areas. The auctions resulted in better conditions for customers.

Ms McCoy started by asking what the right switching level is. The picture is very diverse across the EU. However, since liberalisation, 70-80% of consumers have switched at least once, which should be considered as a success. The other question she raised related to the number of suppliers needed to ensure competition, where, again, the picture is very diverse across Europe. In Portugal, there are 26 suppliers serving approx. 6.5 million customers. In Spain, last year there were 292 suppliers for a country which is six times greater than Portugal. In all cases, however, the incumbents retain a large share of the market, and she wonders whether this is a problem or contestability is sufficient to ensure that benefits also accrue to those consumers who do not switch. She hopes that the current issues in the retail market could be overcome and greater benefits be provided to consumers. In the meanwhile, it is important to maintain in place measures to deal with the short-term affordability issues. Finally, she referred to the criteria for assessing any retail market policy developed by CEER and BEUC (ASPIRE): affordability, simplicity, protection, inclusiveness, reliability and empowerment.

Ms Martin started by highlighting that many consumers are currently unable to pay their bills. She then referred to the issue of suppliers’ failure. Customers left without suppliers might find it difficult to find offers which are comparable to those which they had with the failed supplier. Therefore, she called for strong market oversight to prevent unfair practices. Looking forward, we need to ensure that the retail market will be able to work well again after the current crisis period and it is essential that switching is made as simple as possible and that consumers should be empowered, for example to provide demand response. On a broader perspective, the benefits of liberalisation should be stressed.

After a first round of contributions from panellists, three questions were used to collect views from the general audience.

The first question asked participants about their views on the causes of consumers’ reluctance to switch suppliers. 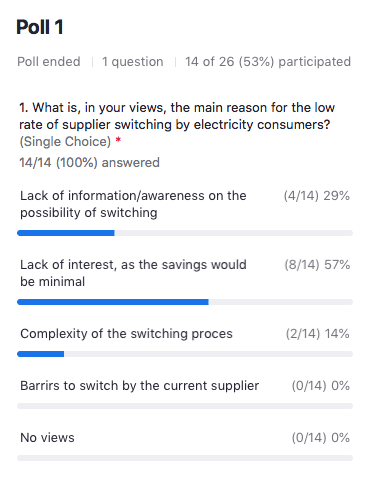 More than half of the respondents indicated the lack of interest, due to the minimal savings which could be made, as the main reason for the low rate of supplier switching.

The second question related to possible measures which could be introduced to avoid suppliers’ failure. 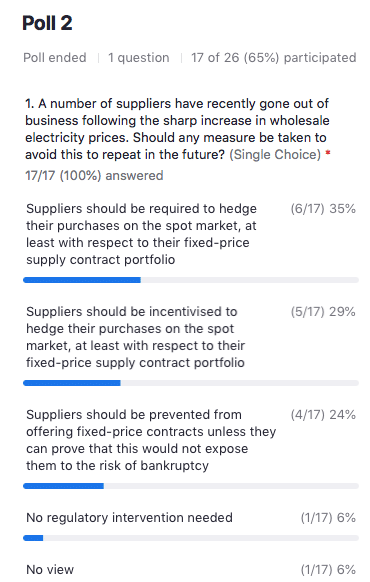 A large majority of respondents indicated that some action is needed; however, they were almost equally split between the different proposed approaches.

The third question sought the participants’ views on whether fixed-price supply contracts should include provisions for charging volumes at the margin (with respect to expected consumption levels) at spot prices. 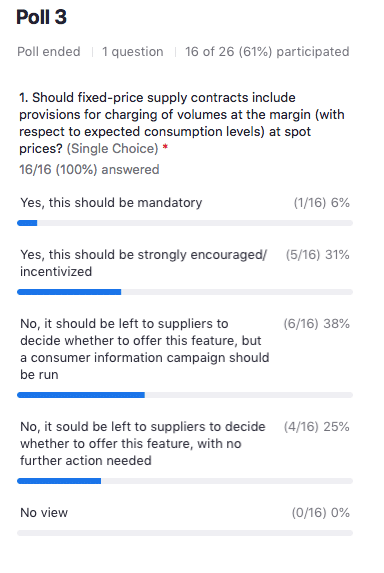 A majority of respondents were not in favour of any provision, let alone a mandatory one. Many respondents however indicated that an information campaign should be run.

The panellists and speakers of the opening part of the debate then commented on the results of the polls and addressed a few specific questions from the audience.

#FSRDebates is an online series hosted by Prof. Leigh Hancher and Prof. Alberto Pototschnig. The focus of this event series is on recent court cases, regulatory decisions, EU legislation, or public consultations to be discussed by a panel of experts.