EU Electricity Network Codes. What are they? Who do they apply to? What are similarities and differences between a network code and a guideline? 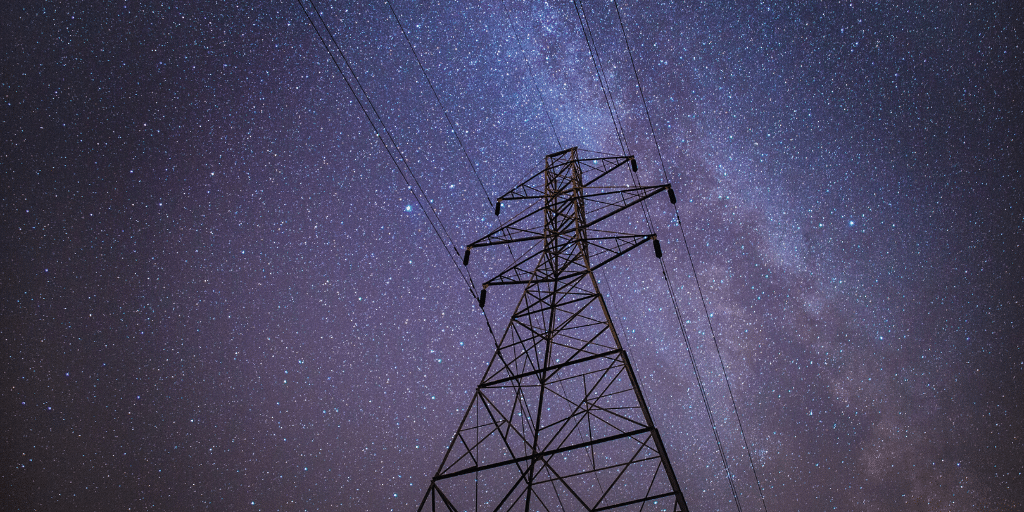 What is a network code?

A network code (NC) is a set of technical rules enabling the development of the internal energy market in Europe. The NCs address the major barriers impeding the cross-border flow of electricity and gas, transforming a mere patchwork of national energy markets into a single European energy market. The NCs guide the integrated operation of cross-border energy networks to allow for increasing competitiveness, more cost-efficient integration of renewables and a secure supply of energy at prices that are affordable for the European consumers.

Background to the electricity network codes and guidelines

In 2017, after a 4-year-long co-creation process by the European Network of Transmission System Operators for Electricity (ENTSO-E), the European Union Agency for the Cooperation of Energy Regulators (ACER), the European Commission (EC) and many involved stakeholders from across the electricity sector, eight network codes and guidelines have been developed and entered into force. After the development of the network codes, the implementation phase started.

Currently, there are eight network codes and guidelines that have been published in the Official Journal of the European Union as Commission Regulations. Commission Regulations usually enter into force twenty days after publication, unless explicitly stated otherwise. The figure below illustrates how these eight regulations can be subdivided into three groups. 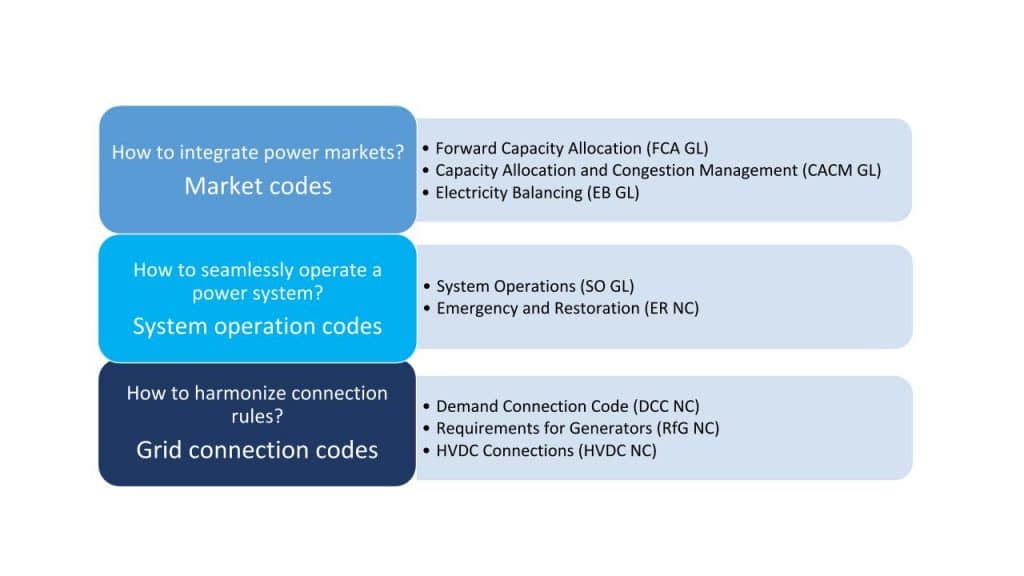 Below these eight regulations are listed and some examples of topics covered by each of them is given. More details can be found in the report The EU electricity network codes (2019 ed.). These topics are also covered in the online course the Evolution of electricity markets in Europe.

How were these network codes developed?

The key actors involved in the development of the network codes were: the European Commission, the Agency for the Cooperation of Energy Regulators (ACER) and the European Network of Transmission System Operators for Electricity (ENTSO-E). However, it does not mean that their role is equal.

The development process for the network codes coming out of the Third Energy Package is detailed in Regulation (EC) No 714/2009. First, the European Commission, after having consulted ACER, ENTSO-E and other relevant stakeholders, drafted annual priority lists, which identified possible areas for network codes development.

Following the Commission’s request, ACER prepared non-binding Framework Guidelines, stipulating the key principles for the development of the network codes. The European Commission requested ENTSO-E to draft the text of the network codes, which should stay in line with the relevant Framework Guideline developed by ACER. The drafts became a network codes after their adoption was recommended to the European Commission by ACER and approved by a committee composed of national experts (‘Electricity Cross-Border Committee’) through the Comitology procedure. At the end of the Comitology procedure, the Commission adopted the network codes as implementing acts.

For more details about this development procedure please consult The EU electricity network codes and guidelines: a legal perspective.

Who do they apply to?

The network codes concern the operation of the energy (electricity and gas) networks connecting two or more EU Member States and countries, which constitute a part of the European Economic Area. However, over the past few years some non-EU countries opted for a voluntary adoption of NCs, e.g. the Energy Community Contracting Parties.

Similarities and differences between a network code and a guideline

Network codes and guidelines are similar in that they carry the same legal weight (both are Commission regulations and are legally binding), are directly applicable (they do not need to be transposed into national law) and are subject to the same formal adoption procedure (‘old’ Comitology procedure). Network codes and guidelines differ from each other regarding their legal basis, the stakeholder involvement, their amendment process, topics and scope, and the adoption of further rules during the implementation phase.

The main practical difference is the work to be done during the implementation phase. In general, network codes are more detailed than guidelines. This is because guidelines shift a larger share of the further development to the implementation phase, which can allow for more flexibility but can also slow down or complicate the overall process. Guidelines include processes in which TSOs or Nominated Electricity Market Operators (NEMOs) must develop so-called ‘Terms and Conditions or Methodologies (TCM).’ TCMs are comprehensive (legal) texts that are often referred to as ‘methodologies.’ In most cases, methodologies have to be jointly developed by all TSOs or all NEMOs at the pan-European level or by the relevant TSOs/NEMOs at the regional or national levels. Depending on the scope of the methodologies, the Third Package foresaw their approval either by all National Regulatory Authorities NRAs (pan-European methodologies) or the relevant subset of NRAs (regional and national methodologies). In certain cases, a decision is to be referred to ACER. The implementation of the TCMs foreseen in the first generation of network codes and guidelines will continue until around 2025.

More details about the difference between a network code and a guideline can also be found here.

In its Clean Energy Package (CEP), issued in November 2016 and approved in late 2018, the European Commission proposed a recast of Regulation (EC) 714/2009. The adoption of the Clean Energy Package brought significant changes for both existing and future generations of EU network codes and guidelines.

First, the recast of Regulation (EC) 714/2009 includes provisions that modify the operation of a number of the network codes and guidelines. Also, additional areas for a ‘’second generation of network codes and guidelines’’ were identified. Examples are rules on demand response, including aggregation, energy storage, and demand curtailment and rules for the non-discriminatory, transparent provision of non-frequency ancillary services. For a more detailed discussion about this second generation of network codes, please consult the report ‘INTERRFACE project: review of D2.4 regulatory framework’ and our relevant topic of the month posts.

Second, the development process saw a shift in roles and responsibilities. The strong role of ENTSO-E in drafting the network codes was reduced. The CEP also mandates the establishment of an EU DSO entity to involve Distribution System Operators (DSOs) in the network code and guideline drafting process. The role of ACER in the development phase is expected to increase. Another change concerns the time interval in which the European Commission is required to compile a priority list for new network codes.