Discussing the future tariffs for hydrogen and low-carbon gases

Highlights from the FSR debate: Network tariffs for decarbonised and low-carbon gases 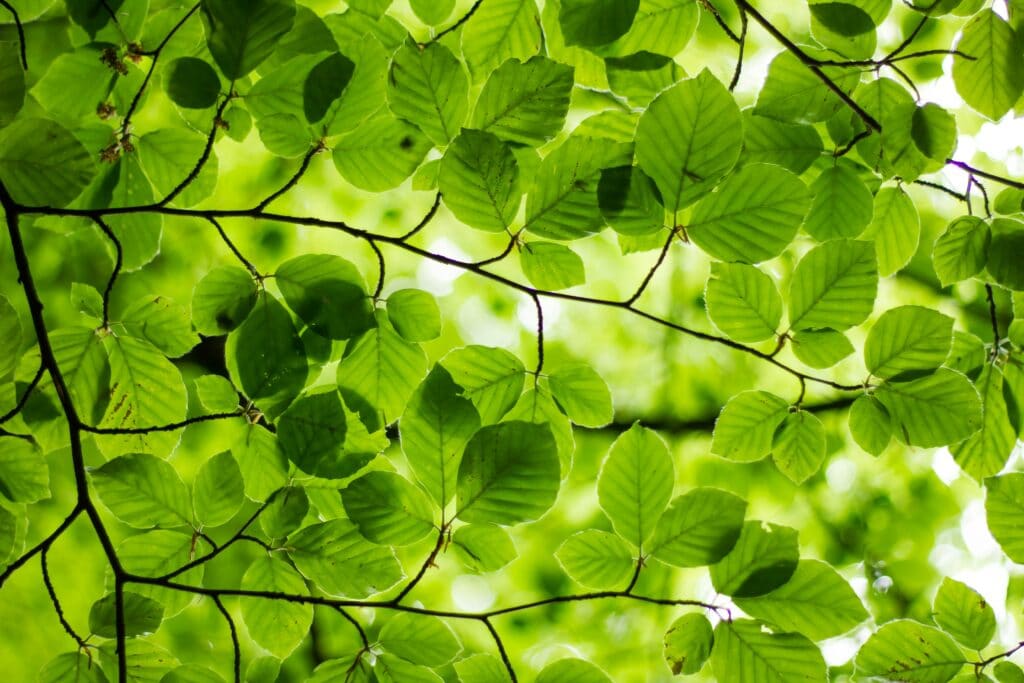 Introduction to the Debate and Opening Presentations

On Wednesday, 9 February 2022, the FSR held a debate, part of the #FSRDebate series, on the framework for network tariffs for hydrogen and low-carbon gases, as proposed by the European Commission as part of its December 2021 Hydrogen and Decarbonised Gas Markets Package. The event was an opportunity to hear the views of a number of relevant stakeholders on this important topic, resulting in a very rich discussion on the future tariff framework.

Opening the debate, Leigh Hancher (Florence School of Regulation) welcomed all participants and introduced the speakers giving the opening presentations: Feodora Petit and Benedikt Klauser (European Commission), and Ilaria Conti (Head of Gas, FSR). Ms Petit started her presentation by emphasising that the Commission’s proposal on network tariffs was just one specific element of the December 2021 Gas Markets Package, which has the overall objective of establishing the right conditions for hydrogen and decarbonised gases to enter the market. The Gas Markets Package, in turn, forms part of the Commission’s ambitious ‘fit for 55’ initiative.

When preparing the network tariff proposal, the Commission got the clear message through the impact assessment and stakeholder consultations that injection and cross-border network tariffs are a barrier to entry, which is why the Commission has proposed a reduction of these tariffs. This reduction is differentiated according to the different types of tariffs: the Commission proposes a fixed 75% discount on the injection of low-carbon gas as well as on storage of such gas. In addition to removing barriers to entry, this is also intended to serve the purpose of creating a level playing field across the European Union and to avoid that National Regulatory Authorities (NRAs) are drawn into climate policy discussions and to protect their independence. Fixed discounts also mean that these tariffs will not be considered State aid. However, with increasing volumes of low-carbon gas, issues might arise in the future so that the Commission has included a review clause for this specific part of the proposal.

A second type of tariff reduction relates to cross-border tariffs and entry tariffs at LNG terminals. The Commission proposes that these tariffs be removed entirely. Seen from an internal market perspective, this is meant to ensure that low-carbon gases are produced where it is most economically interesting and that they can be traded easily across Europe. The Commission appreciates that this will impact TSO revenues, which is why there will be very close Commission monitoring and a requirement that inter-TSO agreements be negotiated if revenues decrease by more than 10%.

In his subsequent intervention, Mr Klauser focused on hydrogen. The current directives are not applicable to dedicated hydrogen networks, which is why the Commission has proposed new rules for such networks. To a large extent, however, these new rules are still based on established principles of electricity and gas regulation, such as unbundling, separation of production and transport, and third-party access. However, the Commission chose not simply to extend the gas regulation and directive to hydrogen because there are key differences between hydrogen, gas and electricity in terms of their production and state of market development. Some of the key elements that take account of these differences are, first, that hydrogen will initially be mainly used by industrial actors, so that the Commission proposes not to distinguish between transmission and distribution networks. Secondly, there is a need for regulatory flexibility in the ramp-up phase until 2030, so that Member States can opt for negotiated third-party access until then. Thirdly, the proposal envisages that there should be no network tariffs at interconnection points between Member States. This is intended to help improve liquidity and allow for the creation of a true common European hydrogen market. Finally, while the current principle of separation of regulatory asset bases (RAB) remains the default rule, there will be a possibility of cross-financing between different RAB via levies, subject to certain conditions.

Ms Conti thanked the Commission speakers for their clear presentation of the key points of the network tariff proposal. She said that the network tariff proposal had generated a lot of interesting questions at the FSR, especially in the currently-ongoing FSR training on European Gas Network Codes. These included questions about the definition of ‘renewable’ and ‘low-carbon’ gases. As per article 8 of the proposed recast Gas Directive, these definitions will be included in a delegated act that will be adopted by 2024. On what basis will discounts and certification be applied until that point? Another question relates to the interaction between the new proposed discounts and the already existing discounts. There are also open questions regarding the responsibility for performing track-and-trace functions for an increasingly heterogeneous mixture of gas – which actor(s) will be responsible for ensuring gas quality? It is also still unclear who will monitor reverse flows.

Before launching into the panel discussion, Prof. Hancher invited the co-host of the debate, Alberto Pototschnig (FSR), to comment on the proposed TSO compensation mechanism based on his experience in the electricity sector. Prof. Pototschnig stated that the inter-TSO compensation mechanism in electricity is still temporary now, almost twenty years after it was first introduced. It lost a bit of traction with the introduction of cross-border cost allocation for new infrastructure. He stated that important lessons could be drawn from this experience, a topic that would also be picked up on by the polls of this debate (see below).

Ms Bartok focused on the proposed removal of cross-border tariffs. She said that ACER understands the rationale behind this proposal as a push for EU flows of renewable and low-carbon gases and to encourage competition between biogas producers. She said that ACER particularly appreciated the requirement of providing sustainability proofs to obtain the proposed discounts. The complex scheme for obtaining these proofs, however, may generate some debate in the future. Another potential sticking point may be the fact that some end users will attempt to play the system and push volumes across the border rather than use gas locally or domestically. This will need to be taken into account. She agreed with Prof. Pototschnig that the inter-TSO compensation would be a challenge based on previous experience. Regarding hydrogen, Ms Bartok stated that inter-TSO compensation should also be explicitly mentioned in this context. Further, the legislation should also mention that cross-subsidies should not occur.

Ms Krist stated that she was very optimistic about progress towards decarbonisation targets: the Gas Markets Package shows how much progress has been made in the last five years. It takes on some serious matters in a very progressive way. Ms Krist said that she particularly appreciate how the use of existing infrastructure was reflected in the new package. However, she questioned whether the top-down approach taken by the Gas Markets Package was optimally suited to achieving the decarbonisation objectives and whether perhaps an approach that relied more on regional initiatives would be preferrable. More than just tariff discounts would be needed to kickstart the market. Ms Krist also remarked that the proposed discount on LNG terminals could endanger the level playing field objective of the market in renewable and low-carbon gas.

Mr Mangin focused his comments on the proposed tariff reductions and questioned how these ex-post discounts will be implemented. Difficulties arise through the need of differentiating between low-carbon and renewable gases and natural gases that flow in the same pipeline. This is why ENTSOG favours the application of the 75% discount at the injection point, which is what ENTSOG members are already doing. Secondly, Mr Mangin highlighted the issue that the proposal of having no tariffs at interconnection points might lead to artificial congestion. A potential solution could be a voluntary merger of balancing zones.

Mr Claes reflected on the Commission’s overarching aim of pushing for the creation of a hydrogen market. IFIEC Europe supports this objective, since it is clear that we will need hydrogen to reach decarbonisation targets. However, he cautioned against a situation in which hydrogen is pushed in too many different ways, leading to so-called pancaking. Mr Claes also questioned who would pay for the discounts. Would this be done by grey and brown hydrogen that is injected into the system, and would this still render it interesting enough for these actors to inject these types of hydrogen? Or will this cost be borne by the exist side, which may lead to hydrogen becoming too expensive for users.

Following the remarks from the panel, Prof. Pototschnig involved participants in the debate by asking them to express their opinion in three polls. From the first poll, it emerged that most participants thought that the model of charging no tariffs at interconnections should not be extended to all gases since the entry and exit charges reflect the cost of providing transport services. 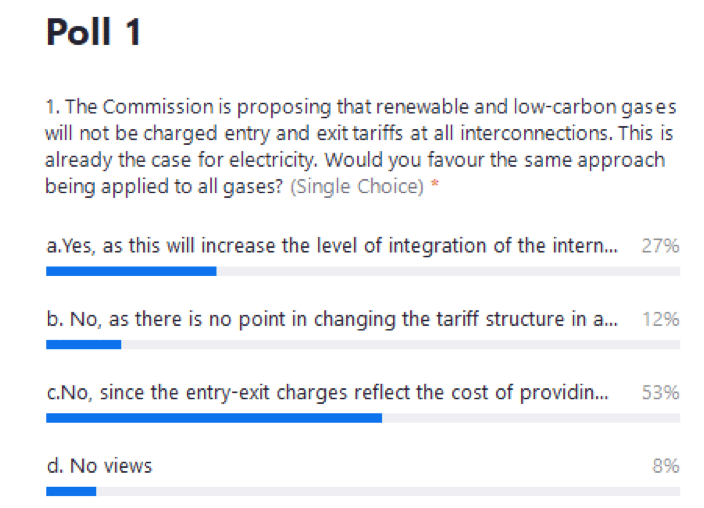 Poll 2 related to points already made earlier in the debate by Prof. Pototschnig and other speakers about inter-TSO compensation. Participants were asked what they considered to be the main challenge in setting up this mechanism. An overwhelming majority of participants (73%) thought that the determination both of how much each TSO should pay and how much each TSO should receive would be the biggest difficulty. 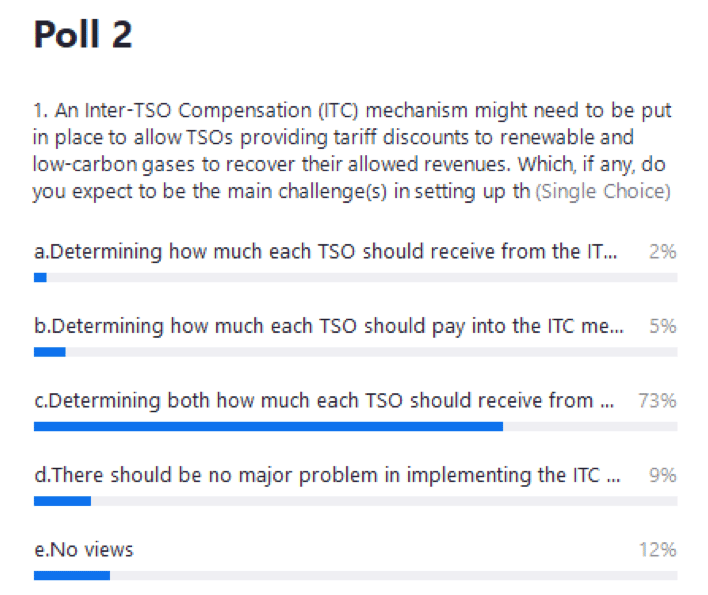 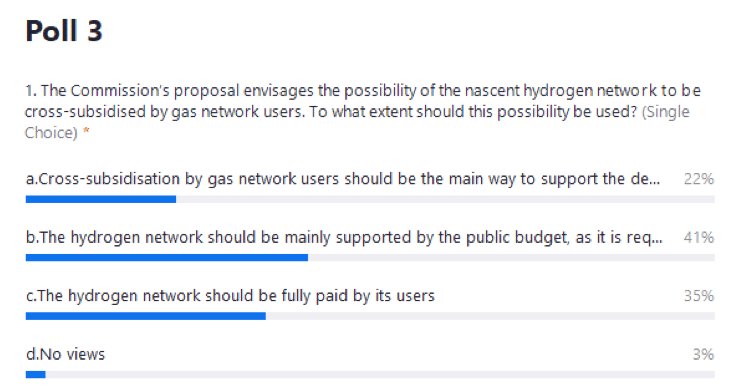 Following a rich debate and the Q&A session, Tom Maes (CREG) provided some closing thoughts, stating that perhaps, regarding the uptake of hydrogen and low-carbon and renewable gases, the European Commission had chosen the shortest, but not the most evident route. Details are still to emerge from network codes and delegated acts, and he welcomed the monitoring and review provisions included in the proposed legislation. The Commission puts a lot of emphasis on tariff discounts but, given the price differences that these gases face in comparison with conventional natural gas, there remains much more to do that just implementing discounted tariffs. Concluding, Professors Pototschnig and Hancher thanked all keynote speakers, panellists, and participants for a wide-ranging and rich debate.