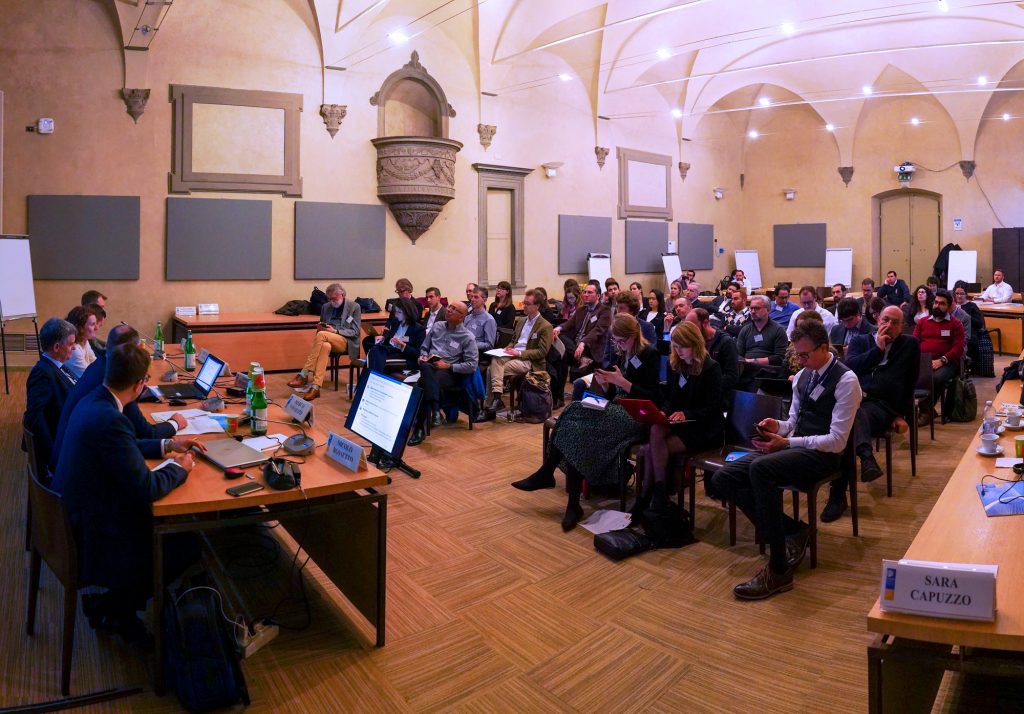 There is a growing interest, in Europe and beyond, for new ways of producing, exchanging and consuming energy.

On 17 and 18 February 2020, the Florence School of Regulation (FSR) hosted the second meeting of the Global Observatory dedicated to these new energy models. About 60 people from all over the world, both from academia and the world of practice, joined the two-day event, enabling a meaningful exchange of experiences, early reflections and research proposals.

In what follows, you find eight highlights, giving you a taste of what emerged in Florence.

These highlights refer to different aspects, such as the definition and heterogeneity of these new energy models, their current level of development and expected growth, economic regulation and the role of technology.

First, the new energy models that usually go under the labels of P2P energy trade, CSC and TE are heterogeneous and a clear taxonomy is not yet in place. Different technologies are involved –blockchain is one of them, although not always present – as well as different organisational structures (you may have cooperatives of renewable producers, informal associations of citizens or schemes led by traditional energy utilities). Motivations differ too: collective investment in green generation is key in some cases, while in others the optimisation of the resources connected to a micro-grid or the trade of surplus energy is the main goal.

Second, these new models are currently limited mostly to niches of early adopters and research projects. In some instances, economic sustainability and scalability look like an issue, but this condition may change, at least in the European Union (EU), due to the implementation of the Clean Energy Package (CEP), which recently introduced into the European legislation the concepts of active customers, jointly acting renewable self-consumers, citizens energy communities (CEC), renewable energy communities (REC) and peer to peer trading. Member states have now the mandate to transpose the CEP into their national legislation and will be obliged to fill some of the gaps left by the EU legislator in some of the relevant provisions. Experimentation is likely to occur and could generate a better comprehension of the best policy and regulatory solutions to implement in the future.

Third, not all these new ways of producing, exchanging and consuming energy are community-based. Indeed, despite the labels sometimes pinned by the promoters of specific initiatives, community energy does not refer to a particular set of activities, but rather to an organisational structure or a governance system characterised by members’ participation to an open and democratic decision-making process (the definitions of CEC and REC in the CEP, for instance, go in this direction). By building on this distinctive feature, community-based initiatives can lead, among other things, to a stronger engagement of citizens in energy matters, foster investments in renewables, optimise the use of local resources and tackle other social aspects of energy, as for instance energy poverty. However, despite recent enthusiasm, it is likely that community-based initiatives will not replace more centralised approaches to energy; on the contrary, they will probably contribute to the development of a hybrid system, where both decentralised and centralised solutions for the production, exchange and consumption of energy coexist.

What do we mean when we talk about peer to peer #energy trading?

Just spent two thought-provoking days at @FSR_Energy for the second meeting of the Global Observatory on #P2PEnergy (GO-P2P). Here’s my first attempt at a twitter thread to share some reflections on the event (1/)

Fourth, it is still unclear whether “pure” P2P, i.e. without any intermediation, energy trading between final consumers is possible. For the time being traditional actors like energy suppliers or local distribution companies are normally involved in both technological pilot projects and available commercial offers. As in the case of Uber or Airbnb, what we usually see are models based on a customer-to-platform-to-customer relation. Powerpeers in the Netherlands or Quartierstrom in Switzerland are no exception.

Fifth, the development of these models is likely to require a rethinking of the regulatory framework that emerged during the restructuring of the electricity industry in the 1990s and 2000s. Back then, policymakers and regulators had in mind basically two types of actors: on the one hand, individual and rather passive energy consumers and, on the other, professional and much larger companies tasked with the generation, transmission, distribution and supply of energy. The decentralisation and digitalisation of the electricity system pave the way for a new world of opportunities and functions that may be inefficiently or unfairly constrained by the classical approaches to infrastructure regulation and consumer protection. Energy regulators are looking at these emerging phenomena and discussing the best ways to deal with them (look here and here for the first thoughts by the Council of European Energy Regulators). However, several questions still need to be answered in this regard: should these new models be defined in a technology-neutral way or not? How should they be supported in a way that does not distort the market nor penalise passive consumers? How should network tariffs and the market design be eventually rearranged without unduly affecting regulated companies and undermining needed investments?

It is managed
•within particular governance
•for key economic issues

Sixth, regulators, at least in Europe, appear to be willing to continue following some guiding principles that have emerged during the liberalisation era. Among these principles, you find the right for final customers to switch suppliers, the unbundling between competitive and monopolistic (i.e. regulated) activities, the development of efficient and reliable distribution grids, the promotion of renewables via explicit support measures rather than via implicit subsidies hidden in non-cost reflective network charges. However, more and direct experience is needed to understand whether those principles are appropriate or not to an increasingly decentralised and digitalised energy system that must undertake a deep process of decarbonisation in the next decades.

Seventh, testing innovative technologies and business models is important but the current recourse to regulatory sandboxes may not always be the most effective way forward. The introduction of “pilot regulation” instead of regulatory pilots could avoid the undertaking of several idiosyncratic initiatives, each of them going in different directions and not easily scalable to the real world. Energy companies seem to agree with this idea and highlight that technology is frequently not the main barrier to the implementation of new solutions. On the contrary, it is the absence of stakeholders’ involvement and consensus on the required changes to the policy and regulatory framework that often blocks innovation scale-up.

Finally, although it is only one of the elements characterising these new energy models, technology will be fundamental in ensuring the necessary collection of data and the automation of several processes (think of smart meters, smart home hubs and the like). By doing this, it will allow people to be active in the energy system without being constantly “busy” with decisions on how to produce, trade and consume energy, a condition that is hardly attractive for most of us.

All the presentations can be found here

Launched in September 2019, the Global Observatory is a collaborative initiative between academia and the world of practice that aims to operate as a platform for the collection and sharing of early experiences and research on P2P energy trading, CSC and TE models. By allowing comparison of different national situations, theoretical approaches and the interplay of different scientific disciplines, the Observatory will debate the essential characteristics of these new energy models, try to better define them, identify the technological, economic, social, policy and regulatory conditions necessary for their successful development, and finally assess the readiness level of the member countries (with the recent accession of Ireland, they are now eight). Constant involvement and communication of the results to policymakers will characterise the Observatory for its entire duration (42 months).

During the meeting, an intense debate via Twitter took place: please look at the #P2PEnergy.

Acknowledgment: FSR would like to thank the Foreign and Commonwealth Office (FCO) of the United Kingdom for the financial support provided to the organisation of the meeting.