What is the European Green Deal, which policy areas are impacted by it and what is the roadmap for its implementation? 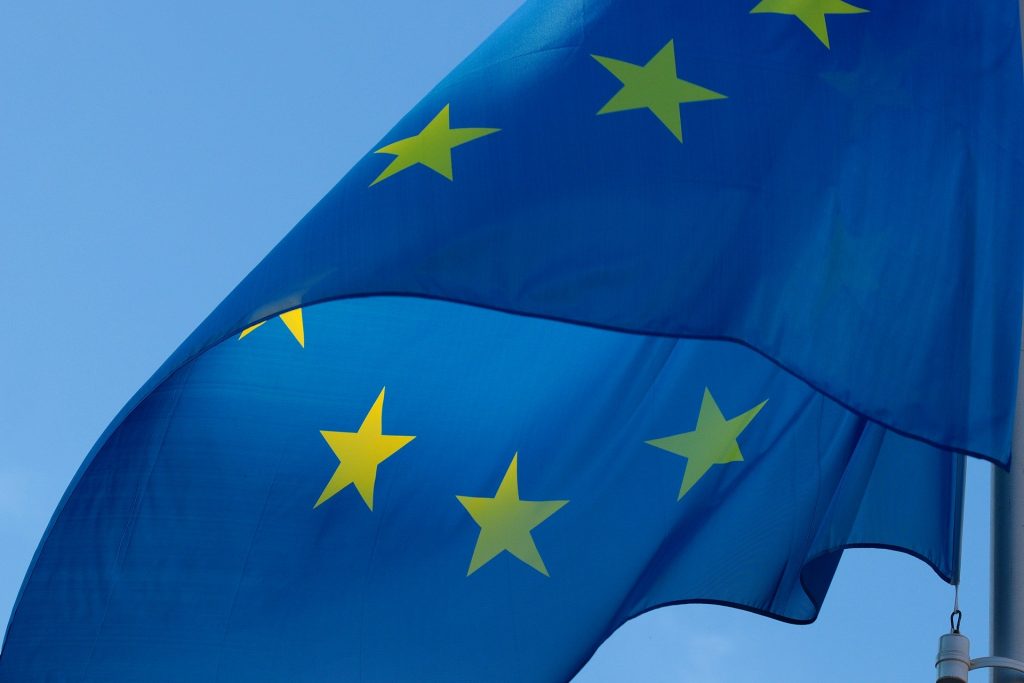 The European Green Deal is the new growth strategy for Europe and a dedicated roadmap for making the EU’s economy sustainable and achieving climate neutrality by 2050. In the words of Ursula von der Leyen, President of the European Commission: “This is Europe’s man on the moon moment. Our goal is to reconcile the economy – the way we produce, the way we consume – with our planet and to make it work for our people.”

Which policy areas are impacted by the Green Deal?

First outlined as a strategic priority in the political guidelines of Commission President Ursula von der Leyen, the European Green Deal was later detailed in Commission Communication COM(2019)640. Eight policy areas are covered and accompanied by additional elements that aim at mainstreaming sustainability in all EU policies, as shown in Figure 1. 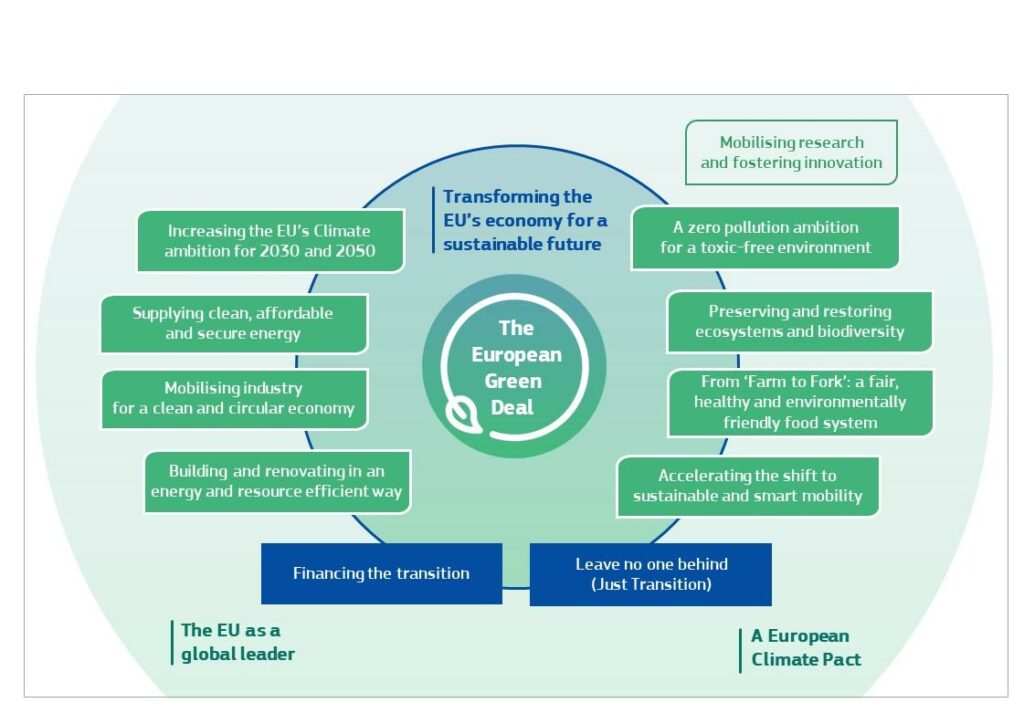 What is the roadmap for the EU Green Deal implementation?

The publication of the European Green Deal Communication COM(2019)640 by the European Commission was only the beginning of the long journey towards 2050. In general, all EU actions and policies are henceforth expected to contribute to the Green Deal objectives. In more detail, the annex of COM(2019)640 includes an indicative timetable for 47 key policies and measures to be implemented in the framework of the Green Deal. This initial roadmap is foreseen to be updated according to evolving needs and required policy responses. So far, the main steps have been

What is the European climate law?

In March 2020, the European Commission published a proposal for the European Climate Law. The aim was to complement the existing “2030 climate and energy framework” by setting the long-term direction of travel towards 2050 and turning the political Green Deal commitment to achieve climate neutrality by 2050 into a legally binding obligation.

Later that year and based on the 2030 Climate Target Plan, the European Commission published a proposal for the climate law. In addition to setting the long-term direction towards 2050, it introduced an intermediate target for 2030. The GHG reduction target for 2030 would be raised from at least 40% (as had been previously agreed under the 2030 Climate and Energy Framework) to at least 55% compared to 1990. In April 2021, the Council and the Parliament reached an agreement on the proposal. The regulation entered into force in July 2021. The European Climate law

The regulation establishes an independent European Scientific Advisory Board on Climate Change, composed of 15 senior scientific experts with broad expertise, that will provide independent scientific advice and issue reports on existing and proposed EU measures.

Member States are required to take further actions, such as the setting up of a climate advisory body and the establishment of a multilevel climate and energy dialogue with different stakeholders. They shall also submit their 30-year strategy to the Commission by 1 January 2029, and every 10 years after that.

The European Commission is required to assess EU and national progress, including whether the measures at these levels are consistent and whether draft EU measures and legislation, including budgetary proposals, are consistent with the 2030, 2040 and 2050 targets.

The updated GHG emissions reduction target for 2030 resulted in the need to revise all relevant policy instruments. In 2021, the European Commission adopted a series of proposals as part of the so-called “Fit for 55” Package as described in the following subsection.

What is the Fit for 55 Package?

In July 2021, the European Commission published the first part of the Fit for 55 Package, followed by a second part including the Hydrogen and Decarbonised Gas Markets Package in December 2021. In alignment with the updated GHG emissions target by 2030, the Fit for 55 package proposes an update of the other 2030 climate targets:

The package is comprised of several proposals. The following announced initiatives were adopted by the Commission and communicated on 14 July 2021:

The following initiatives were adopted and communicated on 15 December 2021:

How is the EU Green Deal financed?

To achieve the Green Deal ambition, significant investments will need to be made and sustained over time. In January 2020, the European Commission published a communication that detailed the investment pillar of the European Green Deal: The European Green Deal Investment Plan (EGDIP), also referred to as the Sustainable Europe Investment Plan. The EGDIP builds on contributions from the EU budget, national budgets to EU projects, public and private investments mobilised by InvestEU and the ETS funds, as is shown in Figure 2. 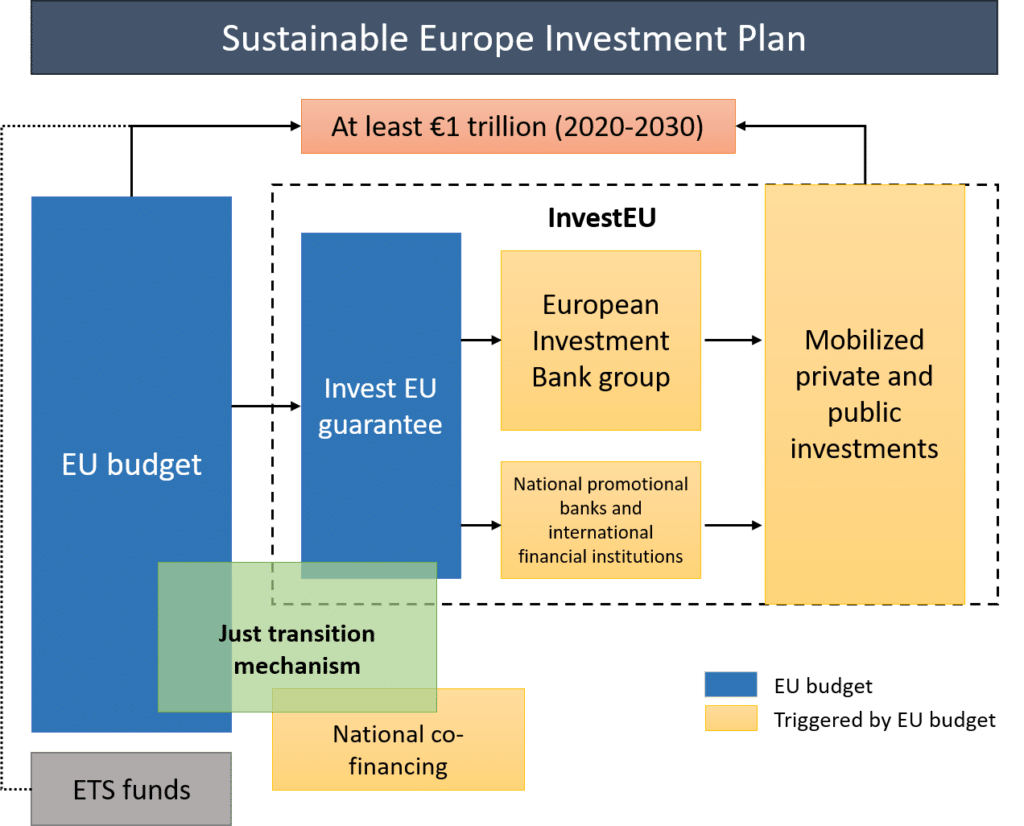 Figure 2: Conceptual overview of the mechanisms to finance the European Green Deal (modified from EC, 2020)

The Commission has pledged to mobilise at least € 1 trillion in sustainable investments over the period 2020-2030 to reach the updated 2030 climate and energy targets.

A significant contribution to the EGDIP is coming from the EU budget. 30 % of the EU’s multiannual budget (2021-2028) and the EU’s unique NextGenerationEU (NGEU) instrument to recover from the COVID-19 pandemic, has been allocated for green investments. Member States must use at least 37 % of the financing they receive under the Recovery and Resilience Facility (which is part of the NGEU) for investments and reforms that support climate objectives. On behalf of the EU, the Commission intends to raise 30 % of the funds under NGEU through the issuance of green bonds. It is expected that such high contribution of the EU long-term budget to the EDGIP will stimulate an additional national co-financing on climate and environment projects.

A smaller contribution to the EGDIP is coming from the Innovation and Modernisation Funds that are financed by a part of the revenues stemming from auctioning carbon allowances under the EU ETS.

The Just Transition Mechanism is designed to provide financial support and technical assistance to those most affected by the green economy’s transition. It has three main sources of financing:

The InvestEU programme is intended provide the EU with crucial long-term funding by leveraging substantial private and public funds. Noteworthy is the inclusion of an EU budget guarantee that allows the European Investment Bank Group and other implementing partners such as National Promotional Banks and International Financial Institutions to invest in more and higher-risk projects. As stated in the InvestEU Regulation (EU) 2021/523, actions under the InvestEU programme are expected to contribute at least 30 % of the overall financial envelope of the InvestEU Programme to climate objectives.

In addition, sustainable finance measures are foreseen to contribute to the European Green Deal by boosting and channeling private sector investment in green and sustainable projects. These measures include the Taxonomy Regulation (EU) 2020/852 for creating a common classification system for sustainable economic activities. In essence, the taxonomy regulation requires that “‘green funding’ will have to finance predominantly, if not exclusively, the commercial activities that are ‘taxonomy compliant’” (Piebalgs and Jones, 2021), which will have an influence on the attractiveness of energy investments in future. Jones et al. (2021) also state that “it is fair to expect that non-taxonomy aligned activities will become progressively more difficult, and more expensive to finance.”

Piebalgs and Jones, 2021. The importance of the EU taxonomy : the example of electricity storage. RSCAS Policy Briefs, 2021/11. Available here