/  Energy & Climate /  Electricity /  Revisiting the “what?” and “why?” of Capacity Remuneration Mechanisms.

Revisiting the “what?” and “why?” of Capacity Remuneration Mechanisms.

The debate on whether there is a need for capacity (remuneration) mechanisms (CRMs) in the EU, especially in the presence of growing penetration of intermittent renewable resources is far from settled. The changes proposed in the “Clean Energy for all Europeans” package regarding capacity mechanisms have added a new dimension to this debate.

However, before delving deeper into this discussion on capacity mechanisms in the EU, let us revisit three questions: what are CRMs?, why do we need CRMs?, and what is the current state of play of CRMs in Europe?

CRMs are policy instruments to ensure adequate investment in generation capacity. Sometimes they are considered as measures that provide stability during the transition to a decarbonized electricity system (Bhagwat, 2016).

The most commonly used classification of capacity mechanisms is based on the treatment of two economic variables, namely price and capacity. These variables could either be determined by the market or by a central planning agency (Jaffe and Felder, 1996). The capacity mechanisms can be classified as ‘price-based mechanisms’ when the price is determined administratively, while the investors determine the volume of capacity in which they would invest at the said price. In a ‘quantity based mechanisms’, the quantity of capacity that is required is set administratively, while the price is determined by the market (Hancher et al., 2015).

Capacity mechanisms can also be classified as ‘targeted’ when the mechanisms focus on remunerating specific generation technologies or power plants and as ‘market-wide’ when the mechanism remunerates all type of capacity. A third classification is based on whether a CRM is “centralised”, where the capacity contracts are awarded centrally, or “decentralised”, where bilateral arrangements are used for awarding contracts (Hancher et al., 2015).

Why do we need CRMs?

The push for clean energy has seen a rapid growth of renewables in the EU electricity supply mix. Although one would assume that the impact of these technologies is entirely positive, recent research indicates that there is a reason for concern with regards to the security of supply.

The rationale for implementing capacity mechanisms varies. In the case of the United States, capacity markets were implemented due to concerns regarding the ‘missing money problem’. The “missing money’ problem was first discussed by Shanker, (2003) in the context of price caps in the US electricity markets.

In the EU, the ‘merit order effect’ caused by RES penetration (Sensfuß et al., 2008) too could negatively affect the business case for conventional power generation. This may lead to mothballing or decommissioning of these power plants. The intermittent nature of RES raises concerns whether there would be adequate supply to meet all demand without depending on conventional capacity, especially during periods of high demand. Thus, the overarching reason for the implementation of capacity mechanisms is considered to be the security of supply. Additionally, many times, the design of these mechanisms is dictated by local requirements and constraints. E.g., the issues in Germany are the north-south grid constraints and the nuclear phase out while in France, the concern is the high demand during periods of extreme weather (regarding temperature) (Coibion and Pickett, 2014).

Current state of play of CRMs in Europe

In response to these concerns, various member states of the EU are either considering the implementation or have already implemented different types of capacity mechanisms. (See Figure 1). In Europe, the UK and France have implemented capacity markets. Belgium, Lithuania, Sweden and Finland make use of strategic reserves. Germany may implement a capacity reserve but decided against a full-scale capacity market for the near future. Poland may implement a strategic reserve too. Examples of countries implementing capacity payments are Portugal, Spain, Ireland and Greece (until 2014 with a new CRM that is being assessed by DG Comp). Italy will use reliability options in the future (ACER and CEER, 2016). 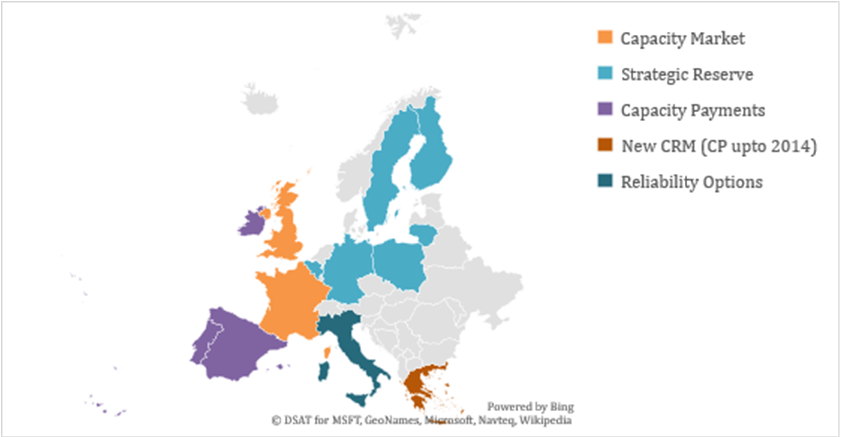 In the next part of this post, we focus on changes proposed in the “Clean Energy for all Europeans” (Winter) Package. In the succeeding two parts of the post, we discuss two key topics that are part of the CRM debate. The first topic concerns the possible participation of intermittent renewable resources in capacity remuneration mechanisms. The second topic focuses on the concern regarding cross-border effects that may occur due to the implementation capacity mechanisms in an interconnected system such as the EU.

ACER, CEER, 2016. Annual Report on the Results of Monitoring the Internal Electricitiy Market in 2015. Ljubljana.