Rendez-vous at $2/mmbtu: gas benchmarks at record lows amid the lockdown

This is the second installment of our Topic of the Month focusing on Covid-19 and decarbonisation. Links to the other installments below. 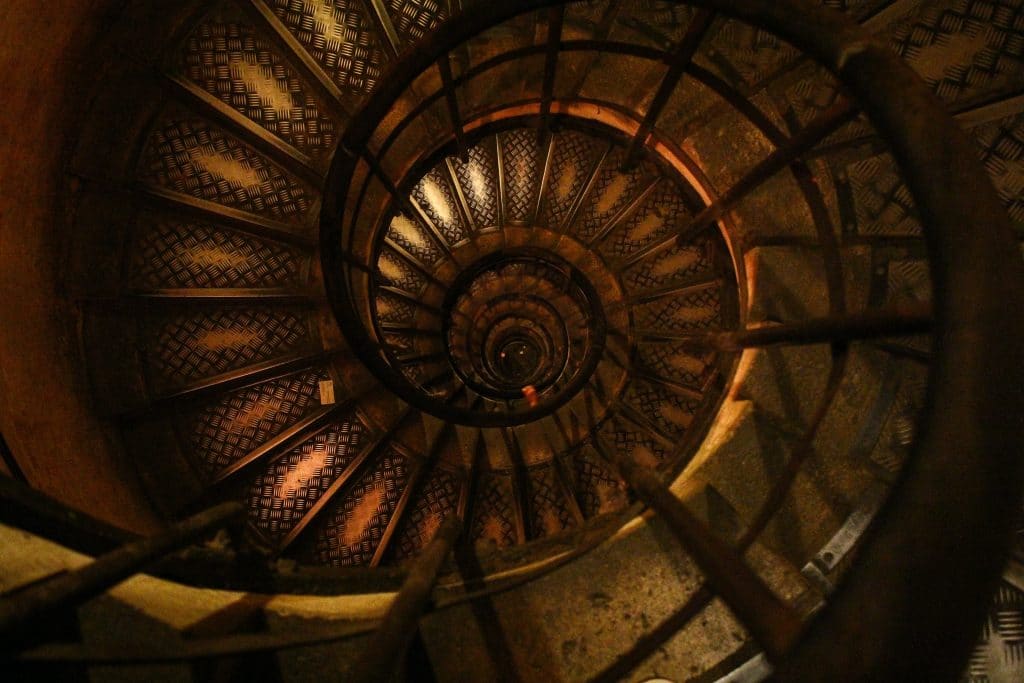 The coronavirus pandemic has triggered the biggest global macroeconomic shock since the Great Depression in the 1930s, with profound implications for energy markets.

The International Energy Agency estimated in its recent flagship report, Global Energy Review 2020, that worldwide energy consumption could fall by 6% this year as economic activity slows down amid Covid-19-induced lockdowns in many countries. 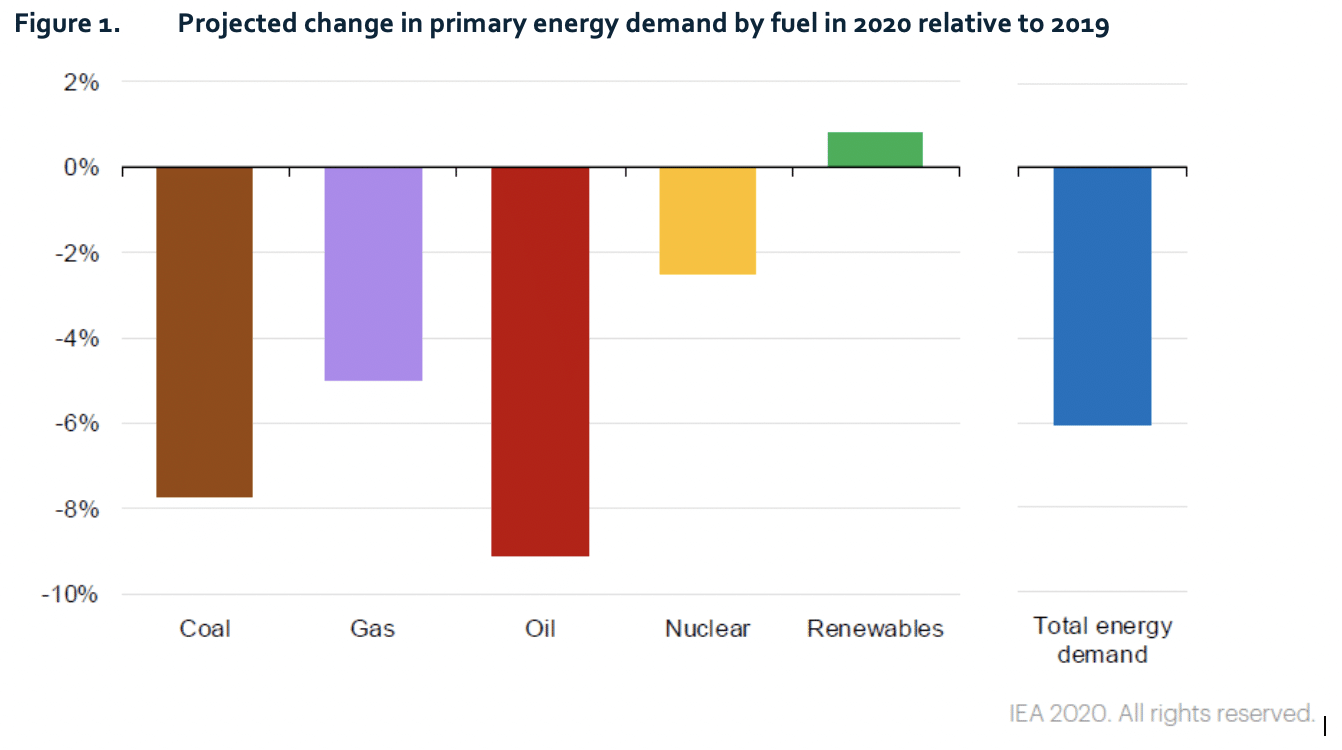 Natural gas demand is expected to be less impacted than other fossil fuels, reflecting the fact that it is less exposed than oil to the collapse in demand for transportation fuels, and less dependent on power generation compared to coal.[1]

Nevertheless, global gas demand is expected to fall by 2.7% to 5% in 2020 – its first annual decline since the 2008-2009 crisis and the largest recorded year-on-year drop in consumption ever.

The story in today’s gas market – a large supply overhang with low spot market prices – sounds familiar to those who follow the oil markets. Yet the path followed by the gas markets was rather different – a largely market-driven supply expansion and an unusually mild winter were pushing down gas prices before lockdowns became part of the equation.

The first symptoms of oversupply

2019 marked a record year in terms of LNG supply growth, with exports growing close to 55 bcm, primarily driven by the commissioning and ramp-up of LNG liquefaction projects in Australia, Russia and the United States.

This wave of new LNG supply growth coincided with a tangible slowdown of demand growth in the Asia Pacific region. Japan and Korea’s LNG imports fell by 7% (or over 10 bcm) as nuclear power generation increased. China’s LNG import growth halved in absolute terms (from 21 bcm in 2018 to just above 10 bcm last year) as a consequence of lower economic growth and a slowdown in coal-to-gas switching programmes. 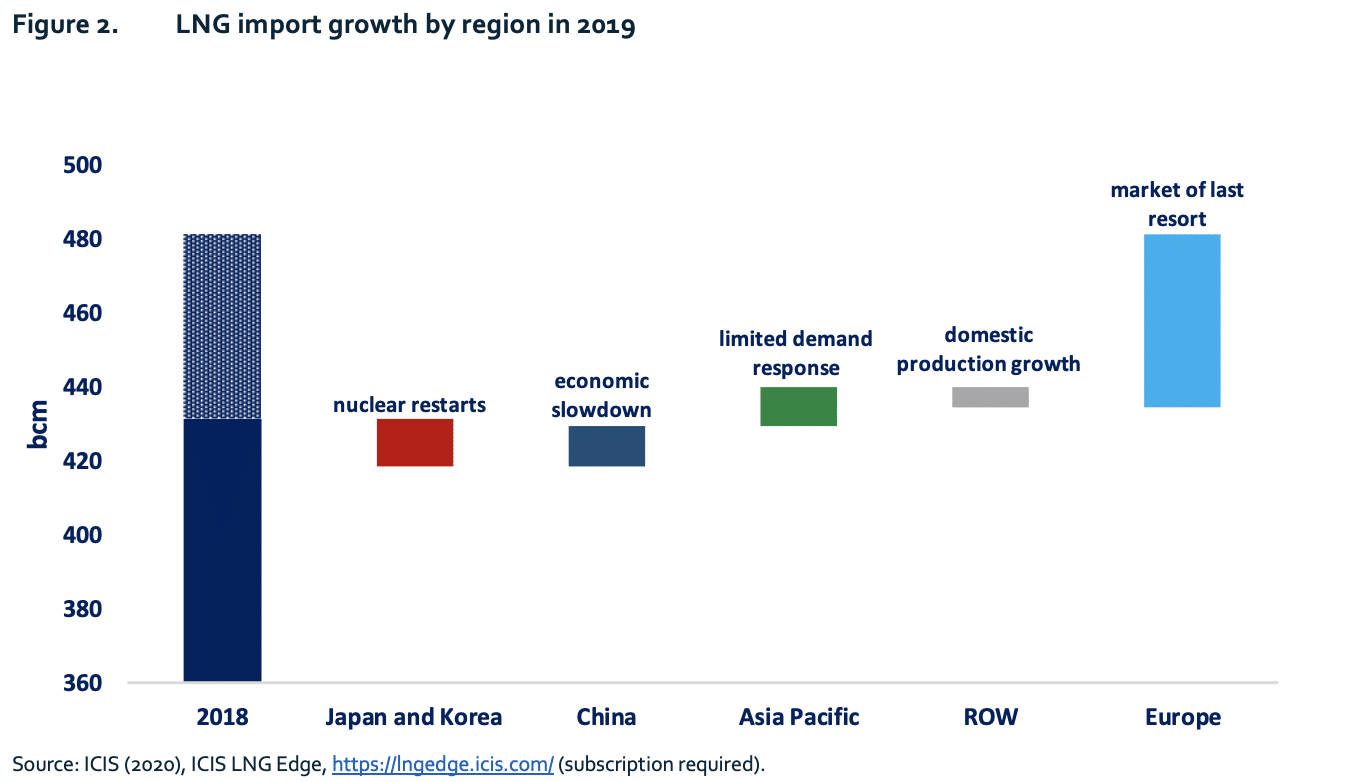 This did not prevent spot prices from falling by over 40% through the year, both in Asia and in Europe[1], to an annual average of $4-$5/mmbtu – their lowest level in a decade.

The particularly mild 2019/20 winter in the northern hemisphere – the second warmest since records began – and the coronavirus outbreak in early January further depressed gas demand. First estimates from our Global Energy Review show that global natural gas consumption decreased by 2% through the first quarter year-on-year.

Supply remained relatively unresponsive to the rapidly changing market conditions. In particular, LNG exports grew by 11.5% with supply ramping up from newly commissioned LNG projects in Australia and the United States.

This additional LNG flooded markets where lockdowns had reduced economic activity,  resulting in global gas prices converging at a record low of $2/mmbtu by the end of April, with Asian and European spot prices trading on parity with Henry Hub: 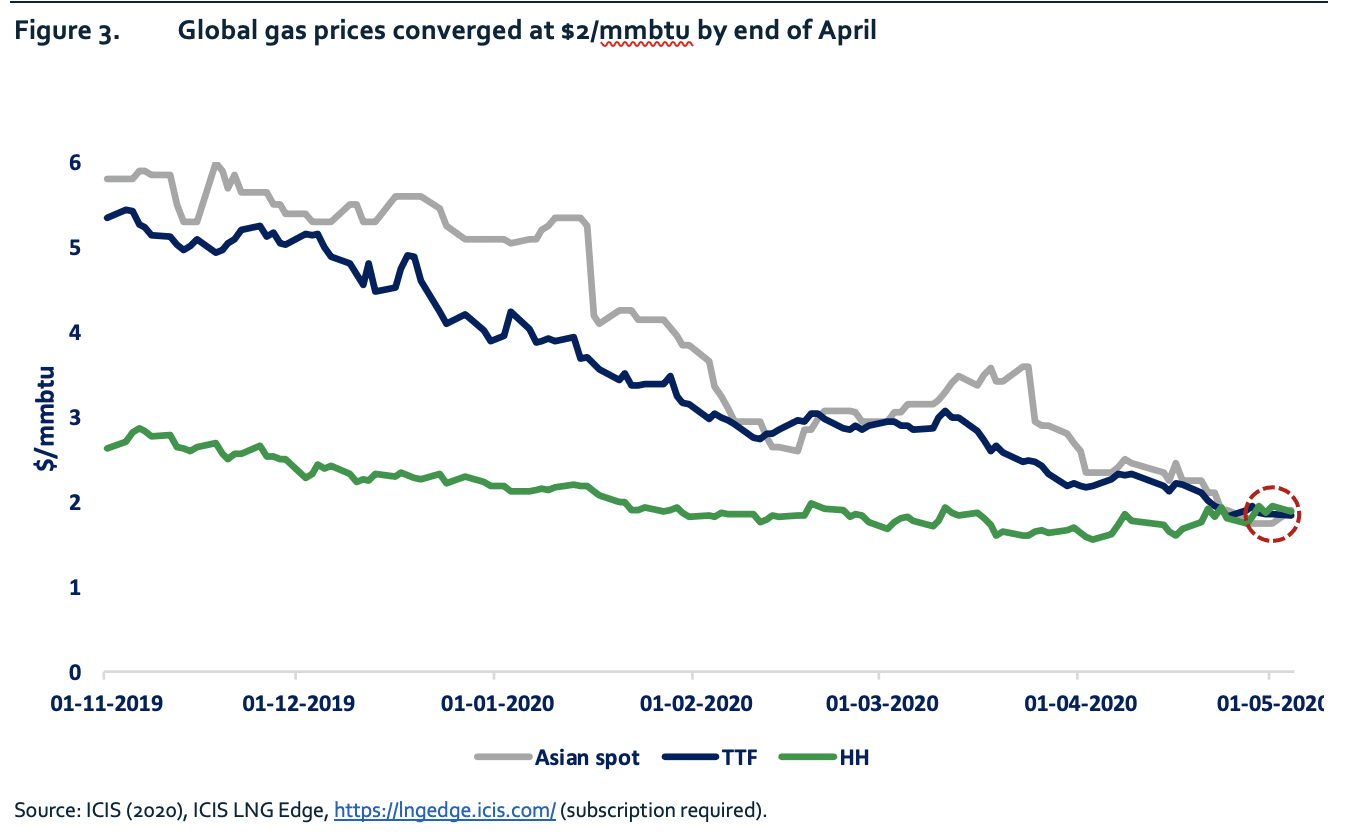 This unprecedented price convergence in essence closed any arbitrage opportunity and is resulting in negative netbacks for a number of LNG exporters and pipeline suppliers.

The short-term outlook for natural gas markets remains bleak. In our Global Energy Review, we foresee gas demand falling between 2.7% and 5% in 2020 – the largest recorded year-on-year drop in consumption ever, equating to a range of 110-200 bcm in absolute terms. Natural gas consumption is expected to fall in every sector and region in 2020 compared with 2019, with the power and industrial sectors accounting for over 80% of the decline.

This gloomy outlook is reflected in the forward curves for this summer. 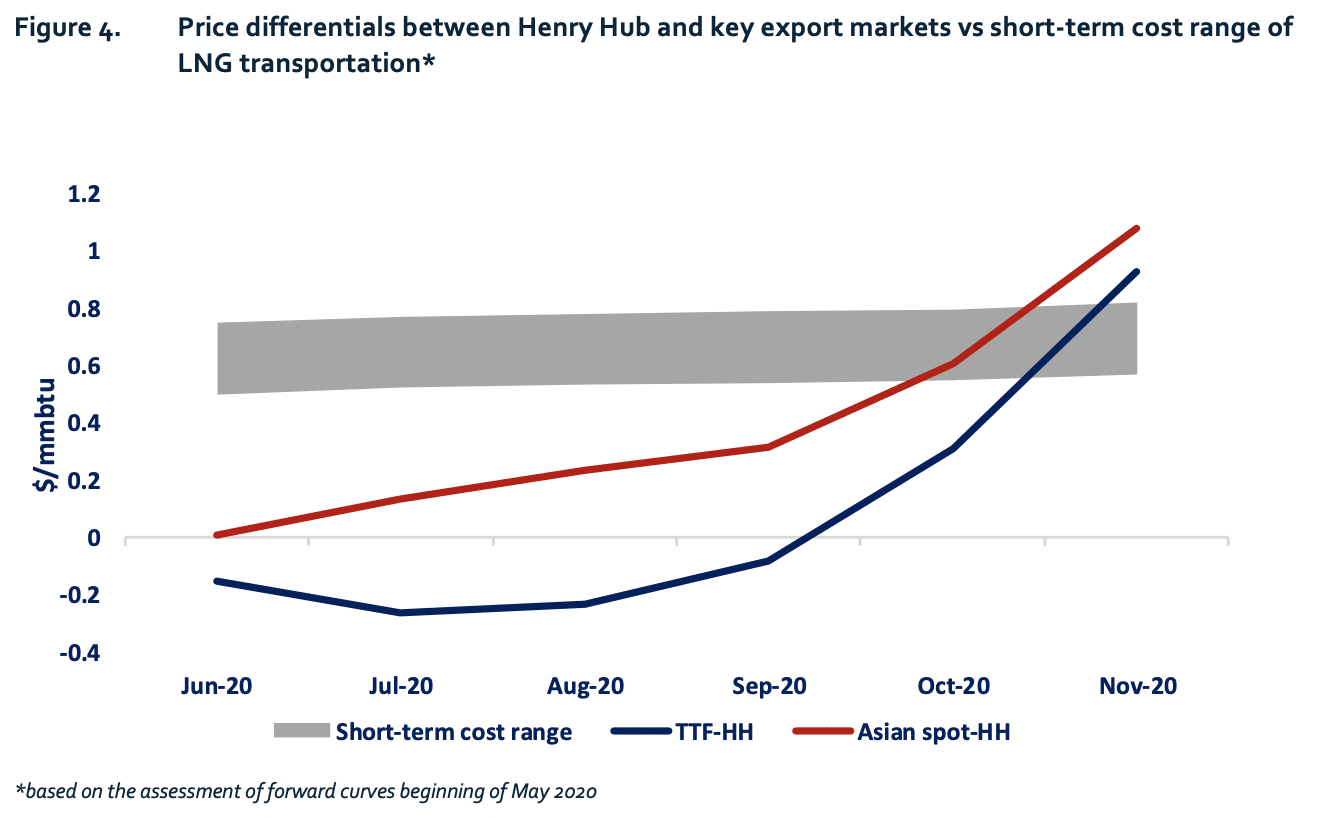 The three regional gas price benchmarks (Henry Hub, TTF and Asian spot) are effectively “locked” in a range where price spreads do not cover the variable transportation costs of inter-regional LNG trade at least until the start of the new Gas Year in October 2020.

Europe will continue to play a crucial role as a balancing market through the summer, however its ability of to absorb surplus volumes of natural gas and LNG will be much more limited compared with last year, for two reasons: 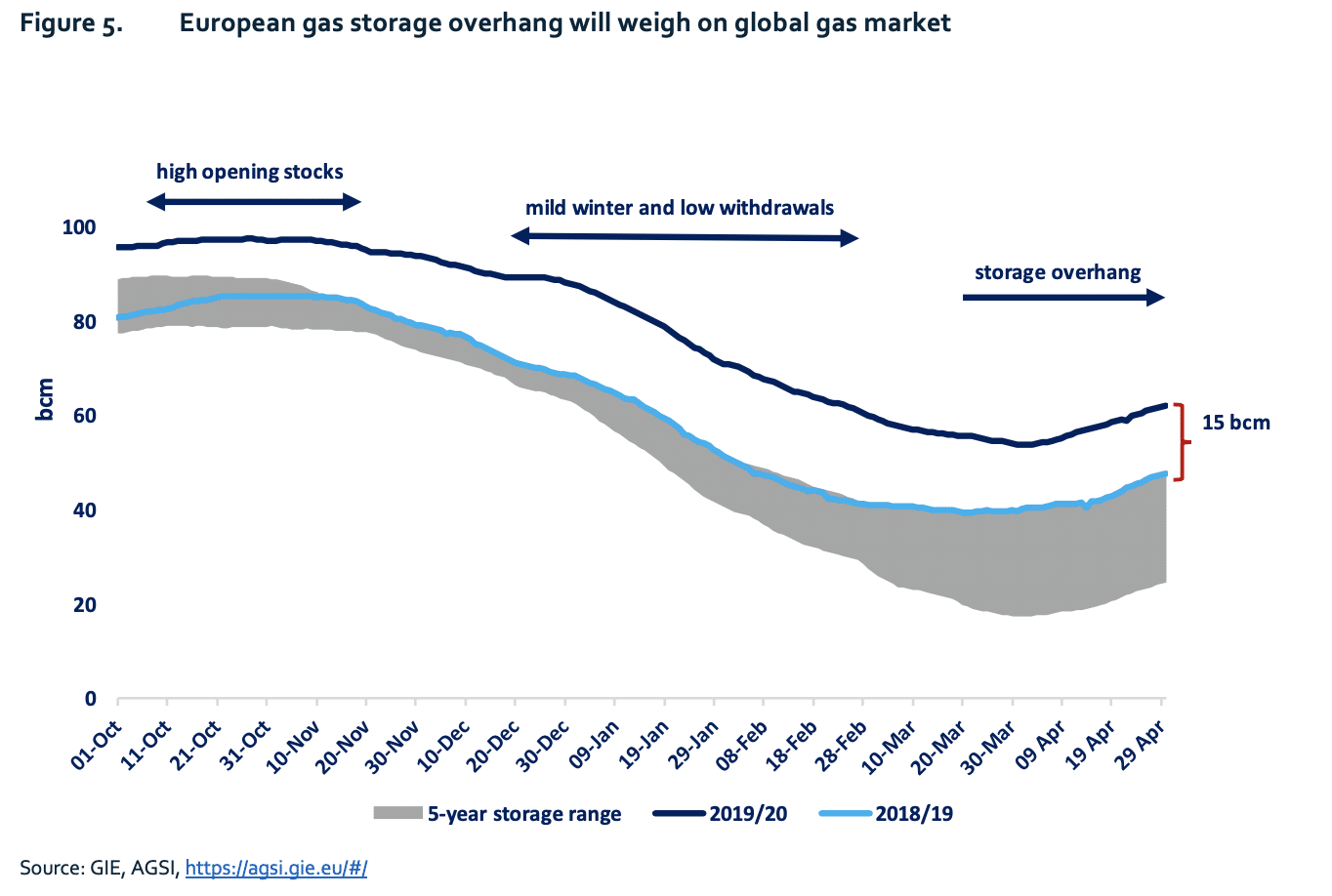 Europe’s reduced capability to balance the global gas market will naturally weigh on the short-term trade dynamics and necessitate other flexibility mechanisms, including optimization of supply flows. The first revisions of sales targets for 2020 by both pipeline suppliers and LNG exporters point in that direction.

When considering the medium-term outlook, the emerging consensus is that a loose market is here to stay. In its latest World LNG Report, the International Gas Union expects the excess supply in the global LNG market to continue at least until the mid-2020s, well beyond the forecast of 2022/23 that it made just a year ago.

Whilst the natural gas industry will need to adapt to this new environment by optimizing investments and operational costs, it can also be an opportunity for natural gas to gain share and create demand in price sensitive, coal-dependent markets. Rising gas-fired power generation in India in April – despite decreasing electricity demand and falling coal-fired output – could be the first sign of natural gas expanding towards new market horizons.

The International Energy Agency will provide a thorough review of market dynamics and the impact of the current crisis on the medium-term development of gas markets in its upcoming Gas 2020 Report.

[2] The share of the power sector is much higher in global coal consumption (over 60%) than in the case of natural gas (40%).

The author is grateful for the support and valuable comments received from colleagues at the Agency. Special thanks to Sylvia Beyer, Jean-Baptiste Dubreuil, Peter Fraser, Jethro Mullen, Aad van Bohemen and Keisuke Sadamori.

This is the second installment of our Topic of the Month: Covid-19 and decarbonisation. Find the other installments here: