Why are offshore wind turbines more numerous in some countries and less numerous in others? Wind conditions do matter but so does the regulation. In this blog post two regulatory regimes for connecting offshore renewable energy projects to the onshore grid, the “German TSO model” and the “UK third-party model”, are presented. Who is leading the dance, the UK or Germany?

The UK – Love me tender

The UK is currently the biggest offshore wind market in the world. By the end of 2015, about 5 GW of wind power was connected to the UK grid, and this capacity is expected to be doubled by 2020.[1] Connecting these generators to the mainland costs billions of euros. The UK decided to organise tenders to allow third-parties, Offshore Transmission Owners (OFTOs), to compete for the ownership and operation of offshore transmission assets. The main reasons for doing so are to deliver cost efficient investments, attract the necessary fresh capital and bring in technical expertise.

The OFTO regime has been in place since 2009, before offshore wind farm grid connections were built, owned and operated by the wind farm owners themselves. Because of unbundling requirements, the offshore generation developers could no longer hold both generation and transmission assets. However, in the current regime, developers of offshore generation projects may still choose to either build the transmission assets themselves or to let the OFTO be in charge of the construction.

Although ultimately electricity consumers pay for the cost of the transmission system, both onshore and offshore, it is of significant importance how these expenses are recuperated. In the UK, the offshore generation developers pay for their connection to the mainland.[2]

Offshore wind projects are becoming larger, more complex and located at a greater distance from the shore. As a result, there are potential efficiencies to be gained from greater coordination in the development of transmission infrastructure. However, the approach followed where OFTOs bid for individual assets focusses mainly on achieving value-for-money on a case-by-case basis and does not directly support coordination. (Coordination between sites has been limited thus far.[3]) Ofgem is developing measures that will help to enable coordination of offshore transmission networks while retaining the benefits of the competitive offshore transmission regime.[4]

Germany was the strongest growing offshore wind nation last year with about 3.5 GW of offshore power connected to the mainland. Last year, the government extended the country’s support for offshore wind until the end of this decade[5]. In Germany, the offshore connections are constructed, owned and operated by the TSOs[6]. The way the TSOs in Germany organise offshore grid connection can be split up into two periods with a regime switch around 2013.

In the first period, it could be said that a “reactive TSO model” was applied. Grid connection was legally guaranteed and was, therefore, not a part of the wind park developers’ responsibility. The government obliged the relevant TSOs to provide a guaranteed grid connection, but the TSO in charge of the connections of offshore wind farms in the North Sea faced severe challenges[7] in providing the grid connection. Grid delays, as can be seen in the figure below, lead to foregone revenues (which were later settled[8]) and became a grave risk for wind park developers. 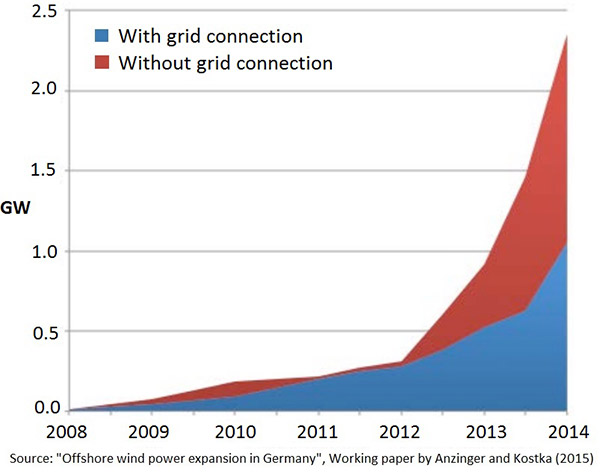 Being confronted with these significant delays, Germany worked on a new approach to offshore grid connection. The model applied in the second period could be referred to as the “proactive TSO model”. Since 2013, an Offshore Grid Development Plan (O-NEP), drawn up by the German TSOs and updated yearly, is submitted to the Federal Network Agency (BNetzA). The developer’s right to request connection has been replaced by an objective, transparent and non-discriminatory allocation procedure that allows for transmission assets to be shared across individual wind farms.5

The offshore generation developer does not pay for the grid connection; the cost is socialised by the TSO charging levies to the consumers[9]. This is an additional financial support for offshore wind projects, next to the conventional renewable support received for production. By not having to pay the connection costs generators are not exposed to a price signal that they can internalize in the total investment cost. This is a serious issue in the ‘reactive TSO model’, but became less critical in the ‘proactive TSO model’ as in this case it is the TSO, who is informed about the connection costs, in charge of the siting decision.

Although there were significant coordination issues between the construction of offshore generation and offshore connection in Germany, it can be argued that by making the TSO responsible for the connection offshore grid planning, more specifically the coordination among generation projects, is encouraged. An example is the Borwin project in which several offshore wind farms have been developed in a short time span in the same area (clustering)[10]. By coordinating the project and anticipatory investment, approved by the regulator, significant economies of scales could be profited from.

No other country with significant investment in offshore wind applies exactly the same governance to offshore grid connection; the matter is too broad, but trends are visible. The Danish model, in place since the first significant investments in offshore wind, is very similar to the German ‘proactive TSO model’. Belgium and the Netherlands, both with concrete plans to develop a ‘power socket at sea’[11], are converging to the German model[12]. Score: 1-4 for Germany, only in the UK it is not the TSO who owns the offshore cables but a third party.

From an economic theory point of view[13], it is important that offshore grid investments respect a set of regulatory principles[14]. A balance between those principles has to found. After this short analysis, it could be said that regarding planning and coordination the German proactive-TSO model prevails, while the UK seems to be leading the way in terms of who should construct, own and operate[15] the offshore grid assets. Competition is introduced, and cheaper capital is attracted lowering the costs, and delays are better under control by the alignment of incentives. Also regarding cost recovery, directly linked with the beneficiary pays principle, the UK appears to be on the winning side. Below a summarising scorecard is presented, score: 2-1 for the UK.

End score: 3-5 for Germany? Not so quick, for “who’s following who’s model” approach, it should be noted that today the capacity of offshore generators installed in the UK nearly equals that of Germany, Denmark, Belgium, and the Netherlands put together. Should this score then be 1-1 or stay 1-4? Moreover, regarding the economic analysis, who says all three ‘dimensions’ have the same weight? Should planning and coordination, long-term efficiency, not be valued more over short-term efficiency? At least for me this duel is undecided for now. Let’s do a replay in 5 years.

[2] More specifically, the wind farm owner is charged by the onshore TSO for the transmission service which in his place is paying the regulated revenue, including an availability incentive, to the OFTO during 20 years. Source: “Study on comparative review of investment conditions for electricity and gas Transmission System Operators (TSOs) in the EU” by the European Commission (DG ENER), BearingPoint and Microeconomix (2015)

[4] Examples are non-developer led wider network investments (WNBI) in which the role of onshore TOs and the National Electricity Transmission System Operator (NETSO) could potentially be enhanced to identify such opportunities and engage with stakeholders. More info can be found in “Offshore Transmission: non developer-led wider network benefit investment” by Ofgem (2014)

[6] Germany has 4 TSOs of which two, Tennet and 50Hz, are in charge of transmission grid assets adjacent to sea territory.

[7] These challenges included the use of infant technology, supply chain, and project finance problems.

[8] More information can be found in « Offshore wind expansion in Germany: Scale, Patterns and causes of time delays and cost overruns” by N. Anzinger and G. Kostka (2015), Working paper part of the research project by the Hertie School of Governance on Large Infrastructure Projects in Germany – Between ambition and reality.

[9] “Study on regulatory matters concerning the development of the North Sea offshore energy potential”, prepared for the European Commission by PWC, Tractabel and Ecofys (2016)

[11] More info can be found in “North Sea offshore wind: developments in Belgium and the Netherlands” by Loyens & Loeff (2014)

[12] In Denmark the cost of the connection is socialized (only not in exceptional cases). In Belgium and Netherlands the offshore wind plant operators pay for the connection. For more info see: “An offshore wind union? Diversity and convergence in European offshore wind governance” by Oscar Fitch-Roy (2015), published in Climate Policy

[13] This analysis could be seen as an update of (part of) the analysis done in “Offshore Grids: Towards a Least Regret EU Policy “ THINK report (topic 5) by L. Meeus et al. (2012)

[14] Strong network externalities, economies of scale, cost and technology uncertainties and to be dealt with. Additionally, the risk for stranded assets should be minimized, allocated to the party who can best control it and the beneficiary pays principle should be applied.