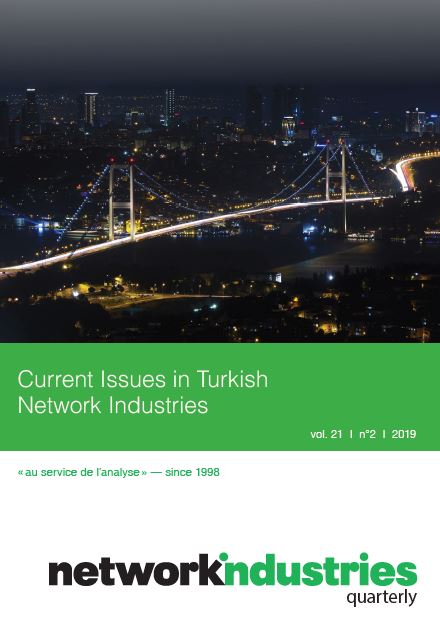 In Turkey, following the economic crisis in 2001, comprehensive market-based reforms were launched in several sectors, including the network industries, such as telecommunications, electricity, and aviation. Privatisation of certain units has enabled the stimulation of investments in different segments and the establishment of sector-specific regulatory authorities, which in turn have resulted in significant improvements. However, the introduction of competition and regulatory achievements in the electricity and the telecommunications industries, have been slower than initially anticipated. Excessive infrastructural investments have created uncertainty around the future of the airline industry. Moreover, emerging platforms on the internet are witnessing problematic regulatory interventions.

This special issue of the Network Industries Quarterly is dedicated to papers related to these developments currently observed across the network industries in Turkey. Academics and practitioners discuss the aforementioned evolutions in the electricity, broadcasting, airline, and platform industries.

Köksal and Uçar examine the public interventions towards the platform industries in Turkey. They emphasise the influence of interest groups and potential welfare effects of those interventions.

Gökdemir assesses the controversial decision of Turkish Competition Authority on sahibinden.com, which is the biggest classified advertisement platform in Turkey.

Ardıyok and Sağmanlıgil evaluate the draft regulation of Internet broadcasting in Turkey by including a comparison with other countries’ regulations.

Delibaşı provides a feasibility analysis on the Istanbul Airport by simulating the number of passengers under two different scenarios for the following thirty years.

Eroğlu analyses whether it is possible to increase renewable energy production without incentives and excessive regulation. He examines unlicensed electricity regulation in Turkey as an example.