/  Energy & Climate /  Gas /  Maroš Šefčovič: Energy Union is on track and on time

Maroš Šefčovič: Energy Union is on track and on time 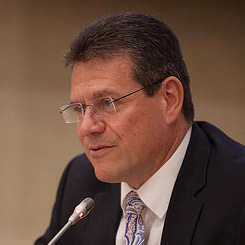 Progress towards the Energy Union is on track and on time according to its vice-president Maroš Šefčovič. Mr. Šefčovič sat down for an unprecedented interview with the former EU Energy Commissioner Andris Piebalgs at a conference hosted by the Florence School of Regulation (FSR).

“We need to actually combine all these projects together, energy, climate change, decarbonisation of transport, more energy efficient buildings and much more assertive energy diplomacy and we have very good project (i.e. the Energy Union) implementing commissioners helping to deliver,” said Šefčovič, as he stressed the importance of  “cultivating” public opinion.

After commending his support from the European Parliament and the European Council, Šefčovič hailed the 3000km so-called ‘southern gas corridor’ pipeline from the Caspian Sea  as “one of the biggest projects in the world.” He went on to predict that Caspian Gas would arrive in Europe as of 2020.

During the interview, Šefčovič also acknowledged controversy surrounding the “Nord Stream 2” project to transport gas from Russia to Europe. Political criticism from emerged heads of state, including accusations from the Prime Ministers of Italy and Hungary that the plan was approved at the expense of investment in southern Europe. This criticism, Šefčovič claimed, reflected the severity of the proposal. The project, he insisted, would only “be built in a way that was fully in line with EU law” and that he “would look after the interests of all EU member states because it’s in our interest to secure the energy security of all member states, not just a few.”

Šefčovič was speaking at the FSR’s conference on the external dimension of the Energy Union. Joining him in attendance was the FSR’s Energy Policy Coordinator Ilaria Conti. Speaking after the discussion, Conti stressed that “the target of free flowing energy within and throughout Europe, has not been fully achieved yet. But rather than looking backward, the debate focussed on future challenges of EU energy policy. These included strategies for EU energy diplomacy and action towards external countries, which administrative or economic obstacles should be overcome and how, what energy mix and source diversification really mean and, of course, how improved regulation could help to solve existing issues.”

Later the same day, Andris Piebalgs sat down with Andrei Kortunov, Director General of the Russian International Affairs Council. Kortunov described a “perfect storm” for the Russian energy sector involving the assent of shale, low oil prices and the sanction imposed in response to the conflict in Ukraine. These factors, he said, had led to a “painful” period of adjustment for Moscow. Russia’s attempt to sell more of its gas to Asian importers hadn’t worked in the way it was intended.