In this interview, Sylvia Beyer shares her insights into the in-depth country reviews of IEA Member Countries and her role as the coordinator of Multilateral Engagement for the G20 and G7. 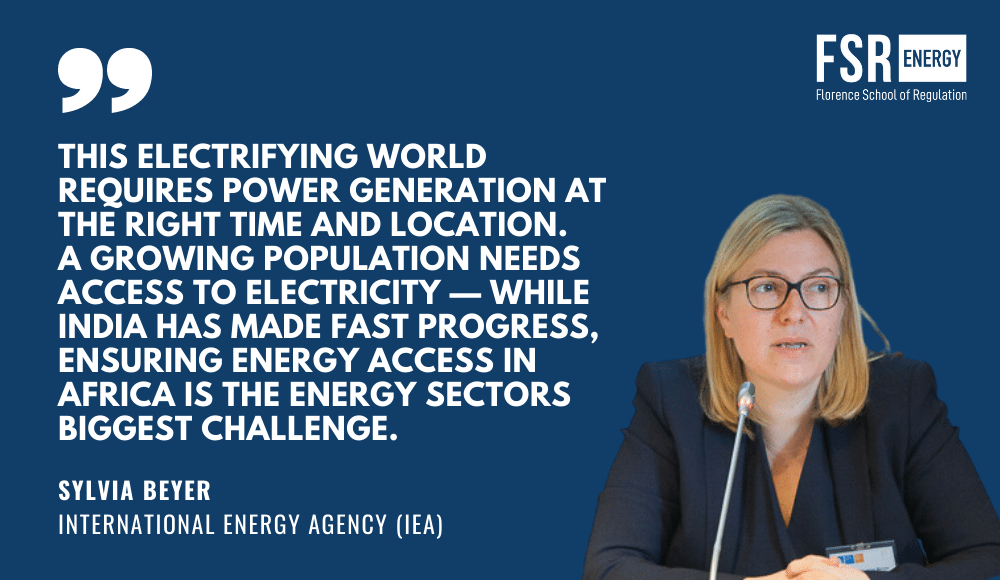 Lights on Women team sits down with Sylvia Beyer to discuss her role as Country Desk Officer at the International Energy Agency and her work linking energy policy and security.

In this interview, Sylvia Beyer shares her insights into the in-depth country reviews of IEA Member Countries and her role as the coordinator of Multilateral Engagement for the G20 and G7.

Q: Sylvia, why did you choose to work in the energy sector? Can you tell us more about your journey into the field?

Inspiration moves mysterious ways, while passion takes a straight road. I was probably inspired by my father who constructed the coal-fired power plants in our region during the 1960s/1970s; some of them with stacks of 200 metres and above. Today, most of the plants are replaced by modern biomass co-generation. The energy sector undergoes frequent technology transition.

During my economics studies at the University of Passau in the early 2000s, I was fascinated by the concept of emissions trading, the Coase theorem and the sources of growth and innovation. After my studies in Saint Petersburg, Moscow, Santiago de Compostela, and the College of Europe Natolin/Warsaw, it was no coincidence that I started my professional career in energy in Brussels.

Energy regulation has been my main focus area over the years. As a trainee at the Union of the Electricity Industry in Brussels (Eurelectric), I was involved in the study of the “Role of Electricity to 2040”. As an associate at APCO World Wide, I advised energy industry clients in the offices in Brussels, London and Berlin, on network regulation, unbundling and the EU 2020 Climate & Energy Package. In 2009, I was hired by the European Commission DG Energy as policy officer to support the Gas Coordination Group, the revision of EU rules on gas security of supply, trans-European energy infrastructure and the creation of the Connecting Europe Facility. Moving from Brussels to Paris in 2012, my work has become much more international.

Q: What is your current role in IEA — and what are your key responsibilities?

In fact, most of my professional life I have spent in a job that links energy policy and security. At the IEA, I support our engagement with the current 30 IEA member countries and 7 partners (Brazil, China, India, Indonesia, Morocco, Singapore, Thailand) — I am working closely with Australia, Canada, Finland, France, Germany, Luxembourg, New Zealand, United Kingdom, United States and the EU. Over the past six years, I have carried out 20 in-depth reviews of the energy and climate policy of IEA member and partner countries. In addition, I am coordinating the IEA’s multilateral engagement in the energy work streams of the G20 and G7.

Q: Is there a particular project that fascinated you the most?

Every single country review I have worked on has been fascinating! My main task at the IEA’s energy policy and security division is to support our IEA country reviews. In-depth reviews of IEA member and partner countries have been carried out at the IEA since 1976. Conducted by peer experts, they examine the entire spectrum of energy, climate and energy research and technology policies in the light of the challenges and opportunities stemming from the energy system transformation and changing energy security.

Personally, I found Australia the most rewarding in terms of learning from the challenges facing the National Electricity Market (NEM). IEA provided insights to the Finkel review of electricity security, notably on the integration of variable renewable energy in the NEM. Morocco’s climate and renewable policies, our review of Russia’s power sector reforms in 2014 and the reviews of Azerbaijan, Armenia and Georgia under the EU4Energy Programme in 2014 were also very interesting.

Q: What are the main similarities and differences between the countries you have analysed? Have you recognised any trends?

Every country is different, conditioned by the natural resource endowment (importer/exporter), its political structure (federal and multi-jurisdictional) and of course, much depends on the party politics around energy and climate issues of each elected government.

However, over a cycle of reviews (5–6 years), we do see many common themes.

I would highlight among the top issues: how to integrate rising shares of variable renewable energy in the power system and markets, how to implement the pledges under the Paris Agreement, how to prioritise and design cost-effective climate policies for the energy sector, the role of natural gas in the energy transition, how to combine leadership on climate change and oil/gas/coal production and last but not least, governance, how the federal government can build on and work jointly with states/provinces towards a common vision.

Our recommendations can’t take a one-size-fits-all approach. We are guided by the shared goals of our member countries in favour of open and fair energy trade, market-based approaches and cost-effective policies.

Q: What do you foresee as the biggest challenges facing the energy sector at the global level in the coming years?

Electricity is becoming the first fuel and this electrifying world requires power generation at the right time and location. A growing population needs access to electricity — while India has made fast progress, ensuring energy access in Africa is the energy sectors biggest challenge.

Q: What has been the role of IEA in the past G20 meetings?

The IEA is the only international organisation supporting the entire energy track of the G20, with analysis, data and policy advice across all fuels, energy policies and technologies, much in line with the G20 Energy Principles, agreed under Australia G20 in 2014. We participate in the energy working group of the G20, the Energy Ministerial Meetings and support other engagement groups, including the Business 20.

Q: Given your role in coordinating IEA’s contributions and inputs to G20, can you give us some insights on the next meeting? What major energy topics will be put on the table?

With the G20 Energy Ministerial in San Carlos de Bariloche on 15 June 2018, we have just finished the energy-related meetings under G20 Argentina. Argentina led successfully a cooperation on ‘energy transitions towards cleaner, more flexible and transparent energy systems in G20 countries’. Despite global geopolitical challenges to multilateralism, Argentina’s Ministry of Energy and Mines was able to reach consensus on the Communique of G20 Energy Ministers, in line with its Presidency’s theme of “Building consensus for fair and sustainable development”. Next on the agenda is the G20 Summit in Buenos Aires. Japan will take over the Presidency of the G20 in 2019 with the Energy Ministerial Meeting on 15–16 June 2019.

Q: What does the future of the energy sector hold? What are the key issues that must be addressed promptly, in your opinion?

Many countries have carried out major power market reforms over the past five years. From my perspective, there is a huge opportunity to share the lessons learnt on electricity market design, reliability and resilience. We see two major challenges across many wholesale markets. On one hand, in a low carbon power market, there is no price signal for large-scale investment. Capital costs have to come down for all technologies and investors demand a long-term contract underpinned by a State guarantee. On the other hand, many electricity systems with higher shares of variable renewable energy are interconnected across multiple jurisdictions — they need clear rules for capacity trade across borders while creating new open markets/products for a larger spectrum of flexibility services (reserves, storage, flexible baseload, demand side, interconnections). In some US markets, capacity in one system can bid into another system’s capacity market, while disconnecting itself physically from the system operations of its ‘home’ market. Resource adequacy beyond national borders is a much ignored but important challenge. The IEA is rolling out its updated Electricity Security Action Plan this year and we are soon releasing our World Energy Outlook 2018 Special Report on Electricity.

The Security of Energy Supply in the European Union

In its recently published Global Gas Security Review 2020, the International Energy Agency estimates a fall in global gas by 3% or 120 billion cubic metres (bcm) – its largest drop on record. Faced with a historic fall in global gas demand in the first half of the year, gas producers and exporters have had to provide flexibility to adjust supply. LNG was one of the key enablers of this adjustment, with monthly global exports decreasing by 17% between January and July.

“Without the flexibility of global LNG supply, the adjustment to the 2020 demand shock would have been less orderly, and could potentially have had a damaging effect on the commercial and contractual structures underpinning global gas trade” says the IEA report.

At the same time, in Europe, the strong commitment towards decarbonisation and the initiatives undertaken to achieve a net-zero economy in 2050 are re-shaping the EU gas market – the traditional security of supply provider – with profound changes expected in the next few years at infrastructure, market and governance levels.

On the other hand, the security of supply and flexibility are also to be provided via the electricity markets, even more in an increasingly electrified and integrated European energy system. Indeed, the IEA has just published its Report on Power Systems in Energy Transition.

How will energy security and flexibility be guaranteed in the future Energy Integrated System? Will LNG become the ultimate provider of security of supply?

Ilaria Conti (Head of FSR Gas) and Prof. Jean Michel Glachant (FSR Director) will discuss with Gergely Molnar and Sylvia Beyer (IEA), based on the main findings of the above-mentioned IEA publications.