Do you want to reduce your carbon footprint and promote the transition to a low-carbon economy? 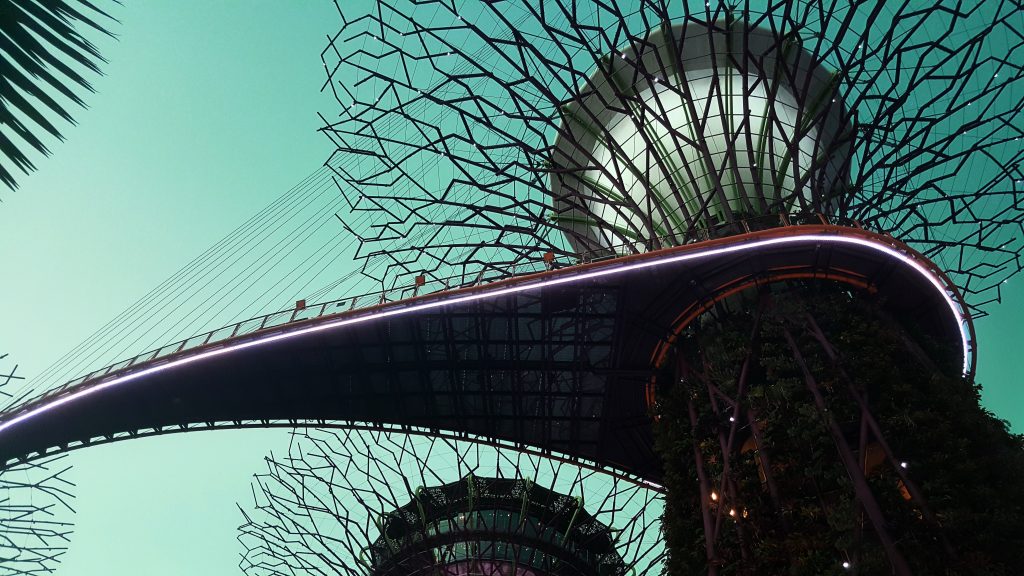 Gardens by the Bay, Singapore

Electricity suppliers have a product that meets your needs: green electricity.

How does it work?

100% green electricity contracts are offered by most suppliers, from the largest to the smallest. This is an argument for product differentiation put forward in the marketing campaigns of major energy groups. Alternative suppliers such as Enercoop and Planète Oui make it their trademark. If you choose this contract, the equivalent of your consumption will be produced from renewable energy sources: biomass, wind, hydro or solar. This does not mean that all the electrons that supply your devices will come from plants using renewable resources. The network through which electricity passes does not differentiate between green and grey electricity. It provides the electricity injected by the production sites to consumers in accordance with the laws of physics. The contract will not change that. It cannot change Kirchhoff’s laws governing the circulation of electrons in the grid. The electricity you will consume will be the same as with a traditional supply contract: it will come mainly from the nearest production sites, so most likely from thermal or nuclear power plants. Nevertheless, your supplier pledges to produce or contribute to the financing of the equivalent of your green electricity consumption.

To make their commitments credible, suppliers rely on a regulatory instrument: the guarantee of origin (GO). The GO is a certificate to ensure that electricity production is renewable, one GO per green MWh produced. It is issued by the renewable energy producer and certified by its entry in a register pursuant to a 2011 Ordinance transposing two European directives. The supplier can use the GOs of its own renewable energy production sites or buy them on the market through Powernext, the company legally responsible for keeping the register for France. To avoid their accumulation, GOs have a life span of 1 year. There is no wholesale market: transactions are over-the-counter. As soon as it is used in a retail sale, the GO is cancelled.

The GO system makes it possible to separate consumption from return for green electricity. Even if the customer does not receive the promised green electricity, he pays its production through the purchase or issue of GOs by his supplier. Indeed, if it does not have renewable generation capacity, the supplier must carry out two transactions to fulfil its green contracts: produce or buy electricity on the wholesale market and buy GOs on the Powernet platform. The two are not necessarily linked: GOs can be issued anywhere in Europe, far from customers. Indeed, Powernext is a member of the Association of Issuing Bodies so that account holders can import (or export) GOs from (or to) other European countries. The decoupling between the green MWh produced and the associated GO allows suppliers with conventional production capacities (thermal or nuclear) to green their offer without changing their energy mix. All they have to do is buy the GOs corresponding to the contracts they have signed. This decoupling can lead to a paradoxical situation where the green company that sells a GO to a grey company cannot sell its MWh as green while the grey producer who bought the GO has the right to do so.

The decoupling between consumption and remuneration of green electricity also has a non-trivial impact on the energy mix due to the intermittency of wind and solar energy sources.

Let us take the example of two consumers, A and B, who each consume 24 kWh per day, more precisely 1 kW each hour of the day. Their electricity comes from a thermal power plant and they use 2 kW of production capacity every hour of the day. They live in a sunny region near the equator, so that a green alternative is available: the producer/supplier can install photovoltaic panels to produce at full capacity during each of the 12 hours of the day.

Consumer A signs a 100% green electricity contract offered by his supplier. The latter must then issue or purchase GOs for 24kWh per day of solar energy (the consumption of A), which requires the installation of 2 kW of photovoltaic panel production capacity. During the day’s hours, the 2 kW covers the needs of both customers, A and also B, so we can do without the thermal power plant. The thermal plant only starts in the evening to supply A and B during the night. Finally, without knowing it, A and B consume the same electricity! It is green by day and grey by night. In a sense, A finances B’s green consumption. Consumer A contributes to the energy transition, which required doubling production capacity, with each type of power plant being used only half the time.

If A wants to produce and consume her own 100% green electricity, she has to install 2kW of photovoltaic production capacity coupled with a battery of 12kWh capacity (neglecting the losses inherent to storage). A then becomes a consumer (a “prosumer”) who can disconnect from the grid and fully enjoy her green electricity. B, on the other hand, continues to use electricity from the thermal power plant at a rate of 1 kW per hour. The plant will run all day but below its production capacity.

If we compare the two options, the environmental impact is very different. Even though in both cases, 2 kW of solar energy are installed and 24kWh of grey electricity are produced, the pollution pattern is not the same. In the case where A signs a green contract, the thermal power plant operates at full capacity for half the time and, in the case where she installs her own solar panels, it operates continuously but at half its capacity[1]. The carbon footprint is the same, but air quality is lower with the green contract because particulate matters are concentrated during evening pollution peaks. In addition, there is an additional ramp-up cost when the thermal power plant is activated at the end of the day[2]. On the other hand, the prosumer option requires investing in energy storage, a technology that, although improving, remains particularly expensive.

A system with little incentive

If in our example, it was enough for A to sign a 100% green electricity contract for 2kW of photovoltaic panels to be installed, this is far from being the case in practice. In France, since the main renewable energy source is hydropower, there is a good chance that the GO finances an existing and often largely amortised hydropower plant. This is a windfall effect for existing power plants. Furthermore, the number of new dams that could be financed is small because of opposition from the local population. In any case, the financial incentive provided by GOs remains low. The amounts are negligible compared to the regulated feed-in tariffs for renewable energy: in the order of 0.15 to 3.6 € per MWh for GOs while the feed-in tariff for solar MWh ranges from 150 to 180 €![3] These few extra euros make little difference in investment decisions.

Since Law n° 2017-227, installations benefiting from public support (purchase obligation or additional remuneration) have had their GOs recovered by the State and auctioned by Powernext.

GO is certainly not the financial lever for the energy transition; some butter on the bread at most. This could change if consumers become massive demand for green electricity. Indeed, the strong demand for GOs would drive up their prices and push for more investment in renewable technologies.

The GO system is an ingenious instrument to meet the demand of consumers who want to contribute to the energy transition without installing solar panels. By relying on the market, it makes it possible to remunerate the supply of renewable energy wherever it may be. Nevertheless, the system would benefit from being more precise in order to better inform consumers about the product they are buying. Few of them know that they can trace the renewable energy source to which they have contributed by reporting the GO number acquired by their supplier on the Powernext site. Some may wish to direct their contribution to certain facilities. Alternative suppliers make it a business strategy. For instance, Enercoop promotes its network of local producers and associations. A conventional supplier could go further in product differentiation when signing the contract by committing to purchase GOs with more precise specifications: the energy source, the geographical origin or the age of the equipment. We could, for instance, subscribe to a 100% solar electricity contract from Occitania. This is quite possible with the current GO system. Energy storage could also be promoted by differentiating GO by the time of day, with a bonus during late afternoon pollution peaks. Such contracts would expand the range of products offered by suppliers. They would be more profitable for producers but also more expensive. It is therefore not clear that the demand would follow.

[1] It should be noted that the investment (or dismantling) and maintenance costs are not the same with the two options.