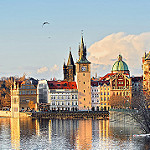 The FSR Director, Jean-Michel Glachant, will participate as a moderator and speaker at the XII International Regulatory Forum taking place in Prague on Thursday 17th March. Jean Michel’s intervention will cover the ‘Regulatory challenges under the changing energy market conditions’.

Miguel Arias Cañete (EC’s Commissioner for Climate Action & Energy) has been invited to open the event and present on the status of Energy Union’s establishment and its key challenges ahead.

A press conference will also take place during the event. In this occasion, Jean-Michel has been invited to contribute and give his views to the Czech Television.

Energy security evolved from ensuring oil, gas and electricity supplies into a more interdisciplinary issue that is far more challenging,…