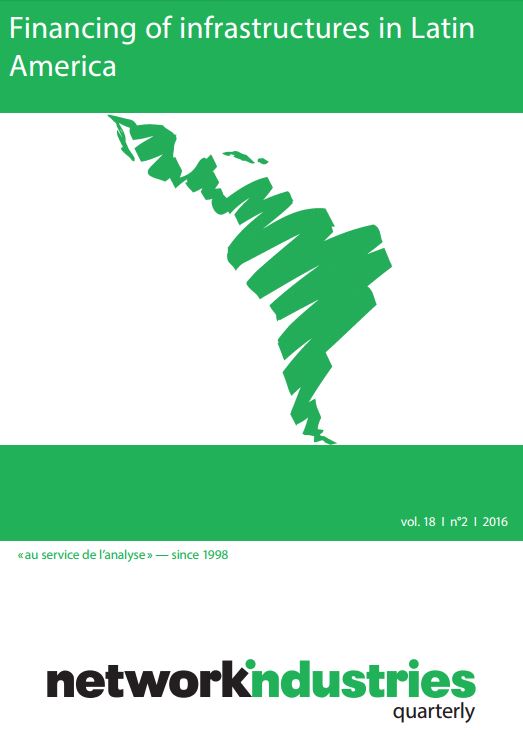 Evidence exists that investment in infrastructure contributes to growth, by increasing productivity, reducing production costs, and facilitating the accumulation of human capital. However, despite the evidence of the positive impact of infrastructure on growth, according to the World Bank, the Gross capital formation (% of DGP) in Latin America Countries (LACs) was 21.4% in 2014, while in fast-growing economies, such as China and India, it was 46.2 and 31.6%, respectively. Besides, according to the Interamerican Development Bank, the total investment in infrastructure in LACs has been fallen since the late 1980s.

As a response to the gradual decline in investment, LACs have been implementing structural reforms to increase productivity, in some cases through investment in infrastructure. However, unfavorable international economic conditions have made this a difficult process. Public investment alone has proved to be insufficient in increasing the stock and quality of infrastructure to acceptable levels. As a consequence, in LACs, it is essential to increase private participation to finance infrastructure. LACs need a stronger regulatory framework, where institutional investors, such as pension and mutual funds, can increase their capital allocations in infrastructure, for example through schemes such as Public Private Partnerships (PPPs), without increasing their risk exposure.

The first article by Jorge Alcaraz and Adriana Castro provides an overview on foreign direct investment as a source for infrastructure building, focusing on how governments from Latin American Countries could improve the effects of these investments. The second article by Francisco Javier Valderrey and Miguel Ángel Montoya presents an overview of Chinese investments in Latin America and the challenges and consequences of this. In the third article Luis Arturo Bernal Ponce and Ricardo Pérez Navarro analyse the effect of public and private investment in infrastructure on economic growth in emerging countries, using Mexico from 2006 to 2016 as the case study. Brazil is instead the case study used by Joisa Dutra and Vivian Figer to shade lights on the future of electric utilities in Latin America. Finally, the article by Irina Alberro and Doreen Vorndran presents an innovative mechanism of financing social development: Social Impact Bonds have received attention across the world and in Mexico to address the challenges that youth faces.