This brief puts together some of the reflections arising from FSR Global’s Energy Innovation Week, which had the underlying aim of exploring “Regulatory learning to realize financing for energy transitions”. 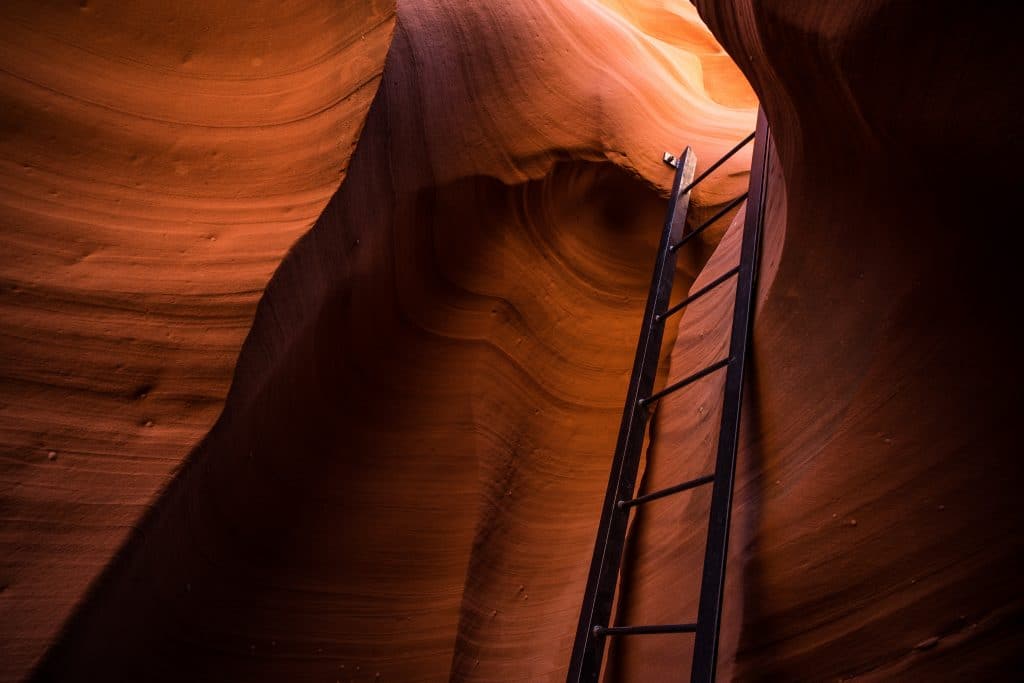 In this brief, Miguel Vasquez and Daniel Schmerler put together some of the reflections arising from FSR Global’s Energy Innovation Week, which had the underlying aim of exploring “Regulatory learning to realize financing for energy transitions”.

Missed Energy Innovation Week? Join our newsletter for updates on events like this one!

New ways of entering into contracts in the energy market

When gearing up for Energy Innovation Week, we knew that our first step had to bring together the policy discussion on digitalization and the technical discussion on the Internet of Things (IoT). To that end, we organized the discussion in Session 1: Digitalization and long-term investment in energy assets, around smart transactions (contracts). The idea was to use the connection between distributed ledgers (say blockchain) and smart contracts. This is useful because, as we know from Institutional Economics, we can think of a broad economic perspective and talk about transactions instead of just contracts. In that context, the first question we were trying to deal with was: Are smart contracts substituting all traditional contracts? This question has two parts, and both are important for our reasoning: Is that substitution possible? Is that substitution efficient?

Our aim was to recast the previous question as: do we want all trade decentralized? The characteristic we discussed is that, in energy markets, when dealing with assets that require significant amounts of capital, we do not have contracts that specify a response for every contingency that may happen in the future. This difficulty in developing complete contracts account for a large portion of the corresponding transaction costs. And one very efficient way of dealing with these costs is centralization. So one may wonder: Will Distributed Ledger Technology – DLT change the nature of transaction costs? For some large investments, the fact that we encode contractual responses will not make the associated contingencies easier to foresee. Differently put, encoding will not change one of the elementary purposes of a contract: to deal with conflict (renegotiation).

Let us put forward an example for the sake of explanation: financial derivatives. Simply put, derivatives are instruments with an income stream that depends on a “contingency”. Very often, this contingency is a price (as in futures, options, etc). Sometimes, contingencies are events. Defining prices are not always easy (thus the pervasive use of auctions in energy markets), but from an automated contract standpoint, perhaps defining events is even more difficult. That is, from the smart contract perspective, there is an inherent difficulty associated with trying to encode a causal link between an event and the economic fundamentals of that event.

For instance, the case of the reliability adders in the original GB pool, which motivated the reform of the GB market. The pool was based on very complex payments rules (associated with income streams when bids were cleared). They included additional payments triggered when plants were available for dispatch. As the calculations were done day-ahead, plants declared themselves unavailable day-ahead and then re-declared available within a day to trigger the now higher payment. In this case, the governance structure of the GB market (in this case the regulator, not automated) intervened to reduce the incentives to pursue that strategy. Again, the automatization of this “trigger” was not deemed the most efficient way of organization. Actually, the GB reform in the 2000s travelled down an almost opposite path.

A smart contract is a contract that is easily agreed between the parts, but they do not help in facilitating a “continued bilateral relationship”. When conflict is difficult to solve, decentralization tends to be more expensive (as in infrastructure projects, as PPAs). When conflict is less relevant (logistics within a firm, a small neighbourhood) decentralization can be less expensive.

Differently put, even if the trading is centralized through a platform, complex contingent claims, that by definition cannot be automated, may represent better risk allocation mechanisms. And of course, the definition of the governance structure is highly relevant. Consequently:

A consideration here about digital contracts is that not everything is solved with the simple application of technology; thus, if a contract is imperfect of deficient, it will not be fixed by the simple fact that the blockchain or another tool is used in the contractual process. The most important thing is to design the contract well, think carefully about the type of project you want to execute and translate it into the clauses of the contract, and, in addition, test its functionality through mechanisms such as sandboxes.

So far, we identified that the role of digital contractual solutions involves coordinating not only signals on revenue streams but on the whole business model. In turn, this means that we need to look at the project/business not only from an operational viewpoint, but we need to include also the financial side of the challenge.

The finance of energy infrastructure

In that context, our next step is to look at potential roles for public participation in supporting the financing of energy infrastructure. The aim was framing the “digital” market design discussion of the first day under the header “business development”.

That is, in Session 2: Public financing of green innovation: Matching offers and demand for financing, we discussed what the needs to develop an energy project are. One of the main goals was to define what the main needs in terms of project financing are. We built on the idea that energy projects are often long-lived assets, with relatively very stable revenue streams, but with significant needs for upfront capital. This makes energy projects a very specific class of investment, where most of the risks are faced in the period where the investment enjoys no returns.

A schematic representation of alternatives for the participation of public financing is presented in the figure below, where we represent an energy infrastructure project as made up of two separate phases: the construction phase and the operation phase. 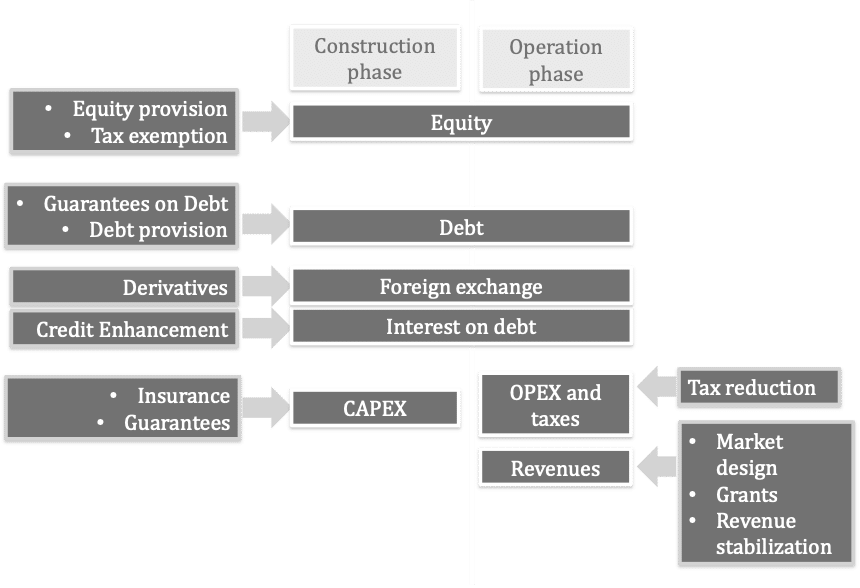 Much of what was discussed in the first day related to value creation through digital contracts is related to measures associated with market design or revenue stabilization (right-hand side of the figure). This figure, on the other hand, shows that when the energy project is large, the potential role of public measures might not be strongly related to the digital dimension (decentralization) of the coordination mechanisms.

Putting together the two previous points of view, we may separate energy projects related to new technologies under two broad headers: i) projects that require significant effort in upfront capital and ii) projects relatively small, with fewer capital constraints.

In order to understand to needs associated with new technologies, we may map the ecosystem of financing offer. In particular, we may identify:

This brings us to session three of Energy Innovation Week: Mobilising private investment for green, climate-resilient energy assets: The role of innovation in finance.

In this context, the assumption that regulations can be crafted slowly and purposely, and then stay in place for long horizons without change, is being challenged by considerable innovation activity. This includes, importantly, deep changes in the possible ways to finance energy projects, and the emergence of a new ecosystem of offer and demand for financing. Consequently, regulatory practice faces the challenge of reviewing regulations (or creating new ones), enforcing them, and communicating with the public, at a significantly increased pace. And all that needs to be done simultaneously to dealing with legacy market designs.

The three Energy Innovation Week sessions intend to contribute the identification of common elements of the population of challenges that conform the current regulatory landscape, in order to define a framework that facilitates regulatory learning to realize financing of energy transitions: Digitalization and long-term investment in energy assets; Public financing of green innovation: Matching offers and demand for financing and; Mobilising private investment for green, climate-resilient energy assets: The role of innovation in finance.

Missed Energy Innovation Week? Join our newsletter for updates on events like this one!

First of all, we want to thank Florence School of Regulation for the opportunity they gave us to develop the Energy Innovation Week last October 2020. Also, we want to express our appreciation to the specific people who contributed with us to the development of this activity: Jean-Michel Glachant, Swetha RaviKumar Bhagwat, Pradyumna Bhagwat, Jessica Dabrowski and Gianluca Dolfi.