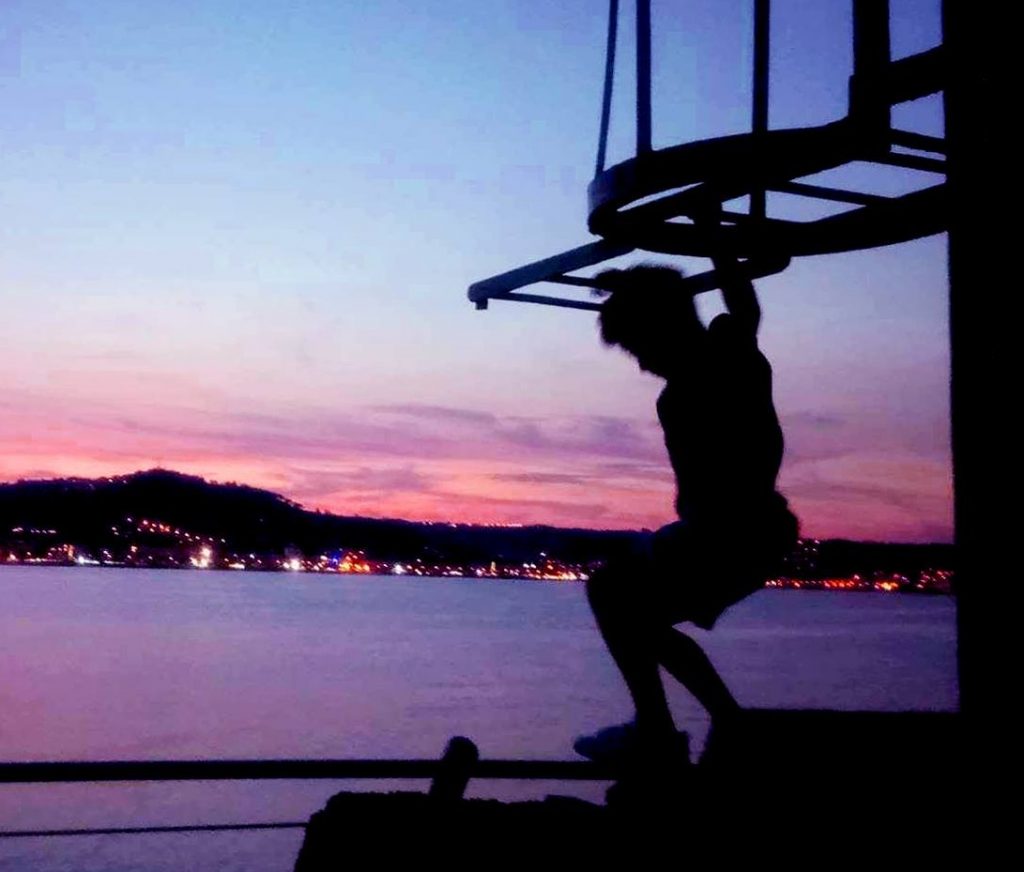 On September 24, Germans will vote for the new members of the Bundestag. The leaders of the two main parties, chancellor Angela Merkel (CDU/CSU) and challenger Martin Schulz (SPD), have just a few days left to convince voters of their positions on issues like education and national security. When it comes to the topic of energy, however, both parties seem closely aligned. Germany has reached a turning point with its energy policy, known as “die Energiewende,” [1] which aims to make electricity production safer and cleaner. This policy is based on ramping up renewable energy sources, abandoning nuclear power, and reducing dependence on coal.

The challenge of intermittency

Germany’s energy transition, one of the most ambitious in Europe, entails major technical challenges due to the intermittent nature of the main renewable energies, wind and solar power.  These renewable energy sources have clear benefits: the primary energies they use are free, their supply is immune to the whims of foreign leaders and revolutions alike, and they do not produce particle or greenhouse gas emissions. But wind farms run at the speed of the wind and solar panels only work during the day and when it is sunny enough. This means that intermittent renewable energy sources cannot replace coal or nuclear power plants on windless nights or during foggy days. Intermittent renewables and conventional energy sources are imperfect substitutes. A farm of two hundred wind turbines, each with a 5MW capacity, is the equivalent of a 1 GW nuclear power plant only in terms of capacity. The two technologies are totally different when it comes to the energy produced over the course of the year, because wind farms do not generate energy when wind speeds are too low.

So how can a production generating fleet dominated by renewables meet the demand for electricity during periods when nature does not supply the necessary primary energy?  Should we dramatically increase installed capacities relative to conventional plants, relying on negative correlations between wind levels and the diversity of areas experiencing the sunshine?  Should we invest in electricity storage solutions to smooth out the differences between immediate production and consumption? Should we invest in interconnections to take advantage of geographic and time differences with neighbouring countries? Or should we change our ways of consuming, and accept that the natural electricity offer will govern our existence in the future?

The variability of wind and solar power

Economist Hans-Werner Sinn [2] assessed these options for Germany in a recent article, using production and consumption data from 2014.  His first observation is that wind and solar electricity production is highly volatile, and significantly lower than production capacity, as shown in the two graphs below.

It comes as no surprise that the technologies in question never achieve their full capacity, given that the primary energy input (wind and sunshine) is by definition outside of human control. The actual ratio of production to installed capacity, however, is surprising: on average 17% for wind and 10% for solar. Installed capacities are therefore a poor indicator of the penetration of these technologies.

His second observation is that variability is not only daily or weekly, but annual. On average, there is less solar power in winter than in summer and less wind power in summer than in winter. This is good news for availability, since the two sources complement each other over the course of the year. However, given the perspective of very large-scale development of these energy sources, their irregularity forces us to address the question of their temporal distribution annually by using storage to meet demand.

Large-scale electricity storage still generally takes the form of water, which is pulled up into reservoirs at pumped-storage plants (PSPs) using electric pumps; it is then sent through turbines and the electricity produced is released into the grid. Daily or weekly storage is not sufficient to cover the energy deficit over the year. Even if water is pumped to fill the reservoirs overnight, to guarantee a supply when there is a lack of wind or sunshine during the day, there will not be enough water to meet demand at the end of the summer. To evaluate storage needs, Sinn performed the following exercise: he calculated the amount of wind and solar energy which must be stored to guarantee the same level of power year-round: the average production for Germany in 2014, which was 9.55 GW (5.85 GW for wind and 3.7 GW for solar). The results are shown in the graph below in TWh, by the white curve labelled “Wind and solar power”. 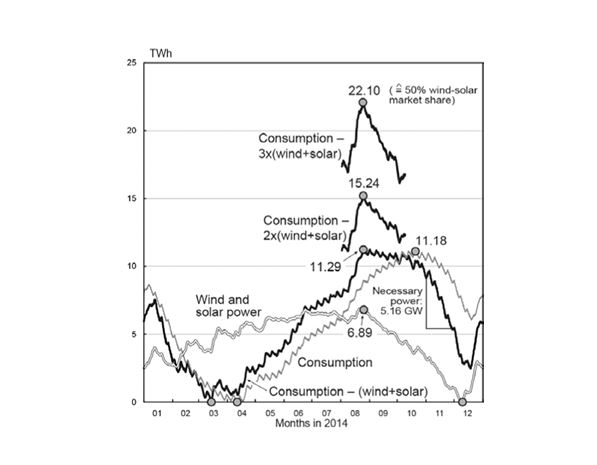 Storage is mainly done in winter and spring. Peak storage occurs in late August, and the reservoirs are then drained over the course of the autumn. Up to 6.89 TWh must be stored in the form of water available in the reservoirs to compensate for the variability of production.  Given that Germany currently has 35 PSPs with a total capacity of 0.038 TWh, we have a long way to go.

Now let’s take into account the annual demand profile in 2014, rather than a constant demand for electricity over time.  This completely changes the storage dynamic. It is represented by the grey curve labelled “Consumption” which peaks in October with 11.8 TWh stored in the PSPs. Now let’s add production from conventional plants. We will assume that they provide their 2014 average actual production of 48 GW constantly, year-round. The storage dynamic in this case is represented by the black curve which peaks at  11.29 TWh. The supply from these plants thus does not enable us to reduce the total PSP capacity.

The problem worsens as renewable penetration increases: doubling and tripling renewables would increase storage capacity needs to 15.24 TWh and 22.10 TWh respectively, requiring 14.153 and 20.517 PSPs! Even without looking at the financial cost, the environmental cost of building so many PSPs would be prohibitive, and there are probably not enough sites available, even underground, to build them.

Sinn’s simulations suggest that better demand management would not resolve the intermittence issue. Transferring some consumption to low-demand times, or as allowed by solar and wind energy, could lessen daily volatility but not seasonal volatility. Storage needs would therefore remain unchanged. Another solution would be to use storage capacity in Norway, whose electricity production is nearly exclusively hydropower. That would require increasing the connections between the German and the Norwegian grids by building new high-voltage lines and integrating the two wholesale markets – and would require Norway to have the capacity to store Germany’s surplus energy. The beneficiaries in this scenario would be Norway’s hydropower producers, which could purchase the electricity produced by the wind and sun on the other side of the North Sea at discounted or even negative prices.[3]

The economic costs associated with the intermittent nature of renewable energy sources and the technical and economic options intended to reduce that intermittence are now familiar.  In a recent paper,[4] we investigate how they interplay with the public policies in support of renewable energy such as feed-in tariffs and renewable portfolio standards. Sinn’s simulations are noteworthy because they quantify the monetary costs for Germany. Those costs are a part of the overall cost of the Energiewende. German citizens should be made aware of them, so that they can make informed decisions in the upcoming elections. Even more so because the difference between France’s transition and Germany’s turning-point goes beyond a question of semantics. A U-turn is not only tough to negotiate, we know all too well where it would take us: back to a world where a secure electricity supply cannot be guaranteed.

[3] In an upcoming post, we will explain why wholesale energy prices are sometimes negative, particularly in Germany.