Insights from the Spanish EV Observatory and Dr Pablo Frías Marín- Researcher and Associate Professor at the Electrical Engineering Department of the Institute for Research in Technology (IIT), Universidad Pontificia Comillas. 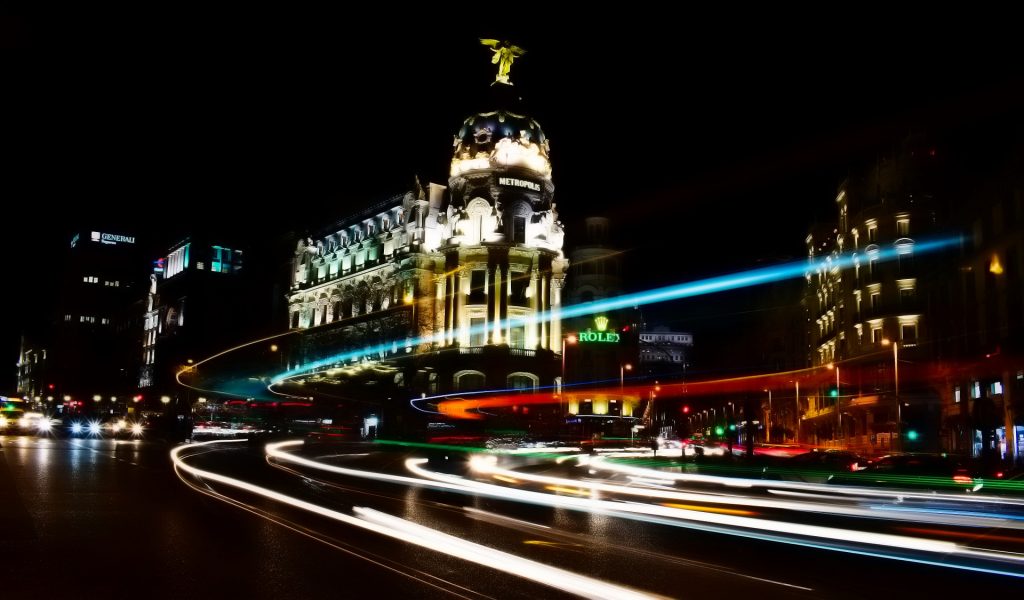 One of the objectives of the Spanish EV Observatory is to serve as a source of reliable and quality information in the field of sustainable mobility. Based on the research findings of the Observatory, Pablo Frias gives insights into the impact of Spain’s actions towards sustainable mobility, such as on the electricity sector and the environment.

Big cities in Spain, like Madrid or Barcelona, have been suffering from many years of severe pollution (since 2010 the limits of NO2 emissions have been continuously exceeded, above the limits required by the Ambient Air Quality Directive). They have received corresponding warnings from the European Commission as well as the possible application of economic sanctions. But sustainability in Spain is not only an environmental issue. It is also a strategic challenge in a country where the dependency rate of energy imports was 74% in 2017. Moving to a renewable energy generation mix and electrifying energy demand will help both in terms of promoting self-sufficiency when using renewable sources and reducing environmental pollution.

The electrification of transportation

In 2015, Spain accounted for a total of 336 million tons of CO2 emissions. Among all sectors, transportation collects almost 25% of all GHG emissions, with road transportation representing 95% of this value. In this context, electrification of transportation, among other alternatives, is a crucial strategy from an environmental perspective. Even more promising is the automotive industry and renewables.

Spain is an important player in the automotive industry, being the ninth global manufacturer of vehicles and the second in Europe and supplying 3% of global car production. According to official data, this industry represents 10% of Spanish GDP, based on 17 car factories and a thousand related components companies, that provides 279,000 direct plus 80,000 indirect skilled employment all over the country.

Moreover, the energy plans for the next decade will allow 42% of renewable energies to be reached over the use of final energy in 2030, and the case of electricity generation, the percentage of renewables in 2030 will be 74%. Currently, half of the generation installed capacity is renewable and it represented 37.5% of the energy consumed in 2019.

Despite the promising starting point and urgent needs, the current situation is far from optimal.

According to EAFO, by the end of 2019, EVs barely exceeded 40,000 of the nearly 25 million vehicles in Spain, and its sales only accounted for 1.25% share of new registrations of electric vehicles (including both battery and plug-in hybrid EVs). These values ​​are far from those in neighbour countries like Portugal with about 6% or The Netherlands with 15% of EVs accounting for new registrations. Public charging infrastructure has been growing in recent years, and is adequate for the existing fleet, with 9,000 stations that represent ratios of 8 fast chargers per 100 km highway and 5 PEV per public charging point.

The previous numbers have been achieved mainly due to a national strategy focused on the promotion of electric mobility through economic subsidies in limited packs. These incentives have been designed to encourage the purchase of alternative vehicles and to install electric vehicle charging infrastructure (different plans have been set, in 2017 MOVEA-MOVALT and MOVES in 2019). However, their effectiveness to boost sustainable mobility has been really low, as the incentives were exhausted immediately, leading to stepped growths. 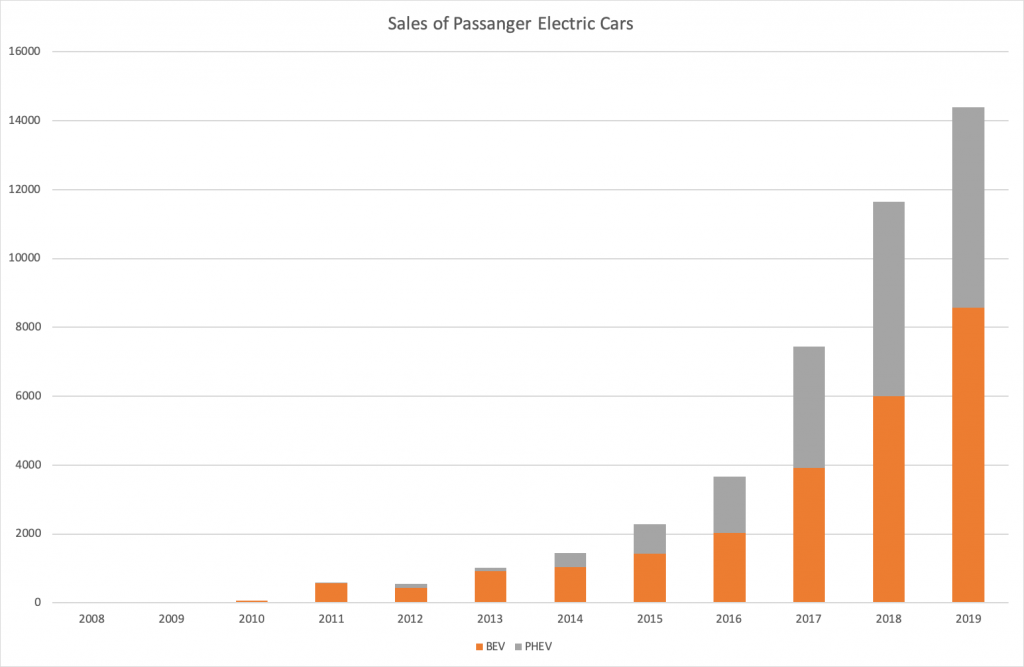 Back in 2006, Madrid’s City Council created the “Mobility Foundation” as an independent social platform to advise local policy markets. Although it had a short life, they introduced some good international practices, such as regulated parking in the downtown area (SER currently the regulated parking area has 153,000 places for 239,000 registered resident cars) whose cost is associated with the vehicle emissions category. A second step towards sustainable mobility took place in November 2018, when “Madrid Central” was activated to limit the circulation through the centre of Madrid for the most polluting vehicles, but in less than a year the change of government of the city replaced it with the so-called “Madrid 360”, cancelling part of the previous plan, to the bewilderment of regulations among citizens. Similar actions have been taken in Barcelona, the Sustainable Mobility Plan introduce the concept of Superblocks as a way to return streets back to the residents.

Traffic congestion is directly linked to pollution and security; however, this is not a substantial problem in Spanish cities. Barcelona and Madrid are respectively in 81st and 147th positions according to the most recent results of the 2019 European Congestion Ranking.

These pollutant traffic restriction policies have been the kick-off of EVs car-sharing, with amazing success in cities like Madrid. According to the Comillas EV Observatory, in the city of Madrid, there are almost 30,000 seats in electric sharing vehicles, including cars, motorcycles, bicycles and skates, apart from electric public transport (bus, subway or commuter). The social acceptance of new mobility services has allowed the expansion of more than 30 companies, where profitability of businesses does not rely on a pay-per-use system but on the added value of the services provided with the bigdata of the sensors integrated in the vehicle fleet (behaviour of drivers, air quality or state of conservation of the roads). These business disruptions can continue to increase thanks to communication infrastructure, as Spain is a world leader in superfast broadband coverage. 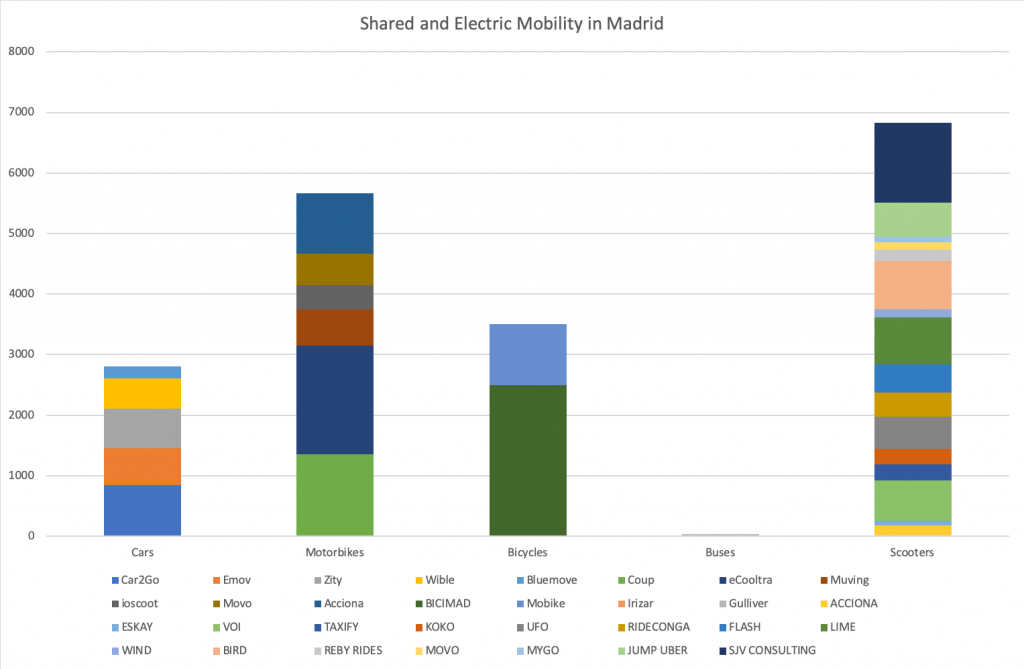 Good regulation is the answer but needs coordination

Regulating sustainable mobility is a quite complex task, in Spain and elsewhere. Local, regional and national authorities are involved in decision-making processes, where each level represents different focus groups (and therefore has different objectives), acts on independent legal competences, and collects different taxes (VAT at a national level, or circulation tax in the city). For instance, limitation of diesel cars in a city will certainly have an impact on the automotive industry in the country, but also on the tax collection, and as a result, available resources for promoting other policies. The situation is even more complex if we consider that sustainable mobility not only affects the Department or Ministry of ​​transport but also industry, environment, employment, health and of course finance. If we add to this cocktail that in the different policymakers the political parties tend to be different, then aligning regulation becomes a huge challenge.

This regulatory challenge can be extended to any European country, and needs coordination in two dimensions (vertical as city-country-Europe, and horizontal between departments or ministries) creating common guidelines, in order to improve the quality of air for any citizen and at the same time guarantee the competitivity and employment in the automobile industry. Finally, in a context of fast technological transformation, the strategic alliance between private companies and public administration is essential to work towards common objectives that achieve sustainable and secure mobility where innovation plays a key role.

Read the previous instalment of the Topic of the Month Electric Vehicle charging policy in India.