The advent of the “prosumer” due to PV adoption is challenging the status quo in distribution tariff design. Historically, the task for the monopolist distribution system operator (DSO) to secure enough revenues to cover its investments and operations was relatively straightforward. Generally, the grid costs were passed through to the end consumer by adding a volumetric charge (€/kWh) on top of the electricity commodity price (also in €/kWh). The allocation of network cost proportionally to the volume of electricity withdrawn by consumers, who had no alternative next to the centralised grid for electricity supply, seemed to be an acceptable practice.

However, the cost to install residential PV has significantly dropped over the last years, mainly due to a combination of cost reductions realised by the PV manufacturing industry and investment subsidies issued by some governments (see Fig. 1). Similarly, the investment cost of battery packs for residential consumers is reducing quickly. Yet, their adoption is not as widespread as PV. 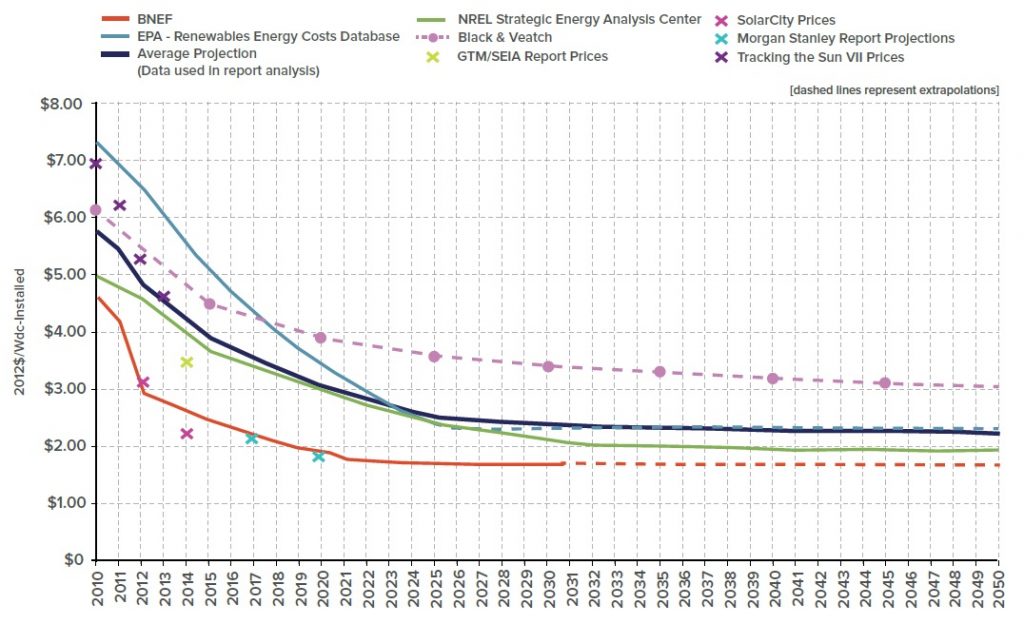 But what does this trend mean for consumers and the existing electricity network infrastructure? It would mean that consumers can significantly reduce the (net) volume of electricity withdrawn from the grid by installing PV panels. If network charges are accounted for only based on net electricity consumption volumes –  electricity supplied from the grid minus electricity injected into the grid – the contributions of these consumers to the recovery of network costs decreases. This is a cause for concern, as network costs are not driven by the net electricity consumption. Rather, network costs are characterised by high sunk costs, i.e. costs made in the past which are not affected by how the network is utilised. This is particularly the case for networks that were already over-dimensioned and in regions with a low expected demand growth.[2]

So, how should distribution network charges be redesigned in a world where PV panels are cheap, batteries are still relatively expensive, and there are high sunk network costs?

In this blog post, I discuss the performance of four tariff designs:

A game-theoretical model is applied to quantify the impact of a tariff design on an efficiency and equity metric.[3],[4]

In this exercise, I assume for simplicity that 50% of the consumers are active. Being active implies that these (rational) consumers install PV and/or batteries if by doing so they minimise their total electricity supply costs. The other 50% of consumers remain passive. In the objective of the DSO is to recover purely sunk network costs, the optimal network tariff design from an efficiency point of view will be fixed charges. Indeed, fixed charges do not distort the consumer decisions. Therefore, they are chosen as the benchmark. The performance of the four tariff design options regarding the efficiency and equity metric are depicted below. 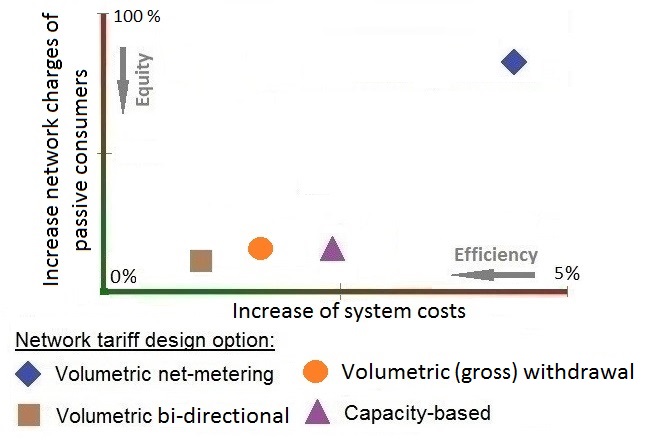 Figure 2: Results for network tariff design options in a world with cheap PV and expensive batteries. Other key assumptions: 50 % of active consumers willing to invest in DER if economically justified and network costs are sunk. The increase of system costs is shown relative to the application of fixed network charges, the benchmark tariff design under these assumptions.

The following results emerge from the mathematical modelling. Firstly, volumetric network charges with net-metering create severe equity issues and inefficiencies. Active consumers are overly incentivised to install PV as by doing so they can not only avoid paying electricity commodity costs but also network charges. In other words, net-metering acts as an implicit subsidy for the adoption of PV. The excess PV generation is fed into the grid which acts as a free battery for the active consumer. The network charge coefficient (in €/ kWh) must increase to allow for cost recovery as the net electricity consumption of the active consumers is significantly lowered. In turn, this further reinforces the incentive to install more PV. This also means that the network charges paid by the passive consumers, who do not have the option to install PV, increase even more.

Secondly, in the case of volumetric network charges without net-metering, the inefficiencies and equity concerns are limited. Active consumers install PV when it is inexpensive because they can avoid paying network charges for withdrawing electricity from the grid. However, electricity demand does not always coincide with PV production and vice-versa.

One implementation of volumetric network charges without net-metering uses bi-directional volumetric charges, in which a PV owner would have to pay network charges for each kWh withdrawn from and injected into the network.[5] These types of charges render the business case of an active consumer to install a large capacity of PV less attractive when compared to volumetric charges with net-metering. Under this implementation, there is an incentive to install batteries as they can increase the amount of electricity produced on-site that could be used for self-consumption. As such, the exchange of electricity with the grid, and thus the network charges paid, will be limited. However, if batteries are expensive, the investment costs of the batteries do not outweigh the potential gains from increased self-consumption, so that the consumer is not incentivised to install them.

To summarize, in a world with mainly sunk network costs, possibly polluted by the inclusion of policy costs, and rather cheap PV but expensive batteries, it does make sense to move away from volumetric charges with net-metering. This has been the case for most European countries and the US.[6] Simply abolishing net-metering or introducing capacity-based charges would be a step forward. However, how future proof would such a move be? Batteries are not expected to remain expensive forever. Next week, I will repeat the same exercise, but with low battery investment costs. In the week after, I will relax the sunk network cost assumption.

[2] See e.g. Borenstein, S., 2016. The economics of fixed cost recovery by utilities. Electr. J. 29, 5–12. doi:10.1016/j.tej.2016.07.013. In case networks are rapidly expanding the main cost driver of the network will be the coincident system peak. By limiting the coincident system peak and by smartly connecting distributed generation, future investments in the network can be avoided, see e.g. Chapter for 4 “A Comprehensive and Efficient System of Prices and Regulated Charges for Electricity Services”’ in MIT, 2016. Utility of the future. An MIT Energy Initiative response to an industry in transition.

[3] For more information about the assessment criteria for distribution network tariff design, please take a look at the article of last week.

[4] The model and parameter settings are described in detail in: Schittekatte, T., Momber, I., & Meeus, L. (2017). Future-proof tariff design: recovering sunk grid costs in a world where consumers are pushing back.

[5] The same network charge rate is assumed for withdrawal and injection of a kWh of electricity.

[6] For the US case, see e.g. for the European case: European Commission, 2015. Study on tariff design for distribution systems. Carried out by Ref-e, Mercados and Indra.