In a highly interconnected system such as the continental European electricity system, there appears to be a concern that the uncoordinated implementation of capacity mechanisms may cause unintended cross-border effects (Agency for the Cooperation of Energy Regulators (ACER), 2013).

The possible cross-border effects of capacity mechanisms can be explained in a simple manner using the following example. Consider two electricity market regions (A and B) that are interconnected. Region A implements a capacity mechanism while region B remains an energy only market. A strong investment incentive in region A may suppress investment in region B. At the same time, region B may free ride on the security of supply and lower prices, which are paid for by the consumers of region A. However, export of electricity from region A to B would depress power prices in region B by eliminating high prices spikes during scarcity. This spill over would have an adverse effect on the revenues of peak generators in region B. (Bhagwat, 2016; Meyer and Gore, 2015)

In this article, we present the results from a study of the cross-border effects due to capacity mechanisms in interconnected power systems using an agent-based model. The paper analyses two capacity mechanisms namely, strategic reserve and a capacity market. For a detailed description of this analysis, please refer to Bhagwat et al., (2017) and Bhagwat and de Vries, (2017).

The scenario used in our analysis consists of two identical markets (Zone A and Zone B) that are connected by an interconnector. The reference scenario (BL) consists of energy-only markets in both zones. The remaining scenarios are permutations of capacity mechanism implementation as illustrated in Table 1.

The indicators that were used in the analysis of the results are 1) Shortage hours (hours/year) 2) The average electricity price (€/MWh). 3) The cost of the capacity mechanism (€/MWh): 4) The cost to consumers (€/MWh): 5) The quantitative results are presented in Figure 1. 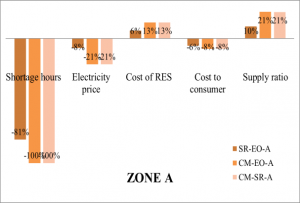 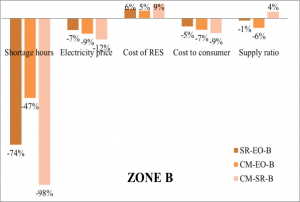 Figure 2: The percentage change in values of various indicators in Zone A (left) and Zone B (right) on implementation of capacity mechanisms as compared to the baseline scenario (BL)

In the scenarios analysed in this modelling study, interconnection with a neighbouring zone of equal size did not negatively affect the effectiveness of a capacity market as compared to a no interconnection scenario. However, this may have been due to the implementation of a large capacity reserve margin in our model.Figure 2: The percentage change in values of various indicators in Zone A (left) and Zone B (right) on implementation of capacity mechanisms as compared to the baseline scenario (BL)

When a capacity market is implemented, a neighbouring market may experience a positive spill-over and therefore free ride in the capacity market. This may result in a greater level of reliability and lower electricity prices in this neighbouring market. Free riding may increase the cost to the consumers in the capacity market, as they are paying for the additional adequacy. The generators in the neighbouring energy-only zone may be crowded out, in some cases to the extent that an investment cycle develops. While this does not necessarily affect generation adequacy and prices in this zone negatively, policy makers may be uncomfortable with the resulting import dependence.

Finally, readers must keep in mind that these were results from a modelling study and that models have limitations. The limitations of this model have been described in  Bhagwat et al., (2017).

Agency for the Cooperation of Energy Regulators (ACER), 2013. Capacity remuneration mechanisms and the internal market for electricity.