This morning I read an article on Bloomberg.com[1]:

“Vattenfall AB won a tender to build two offshore wind farms in the Danish North Sea with a record-breaking bid of 60 euros a megawatt-hour. That’s 20 percent cheaper than the previous record set by Dong Energy A/S in the Netherlands in July.”

Without going into the specific details, this price level proves that offshore wind is going to be competitive with conventional electricity generation in the near future. However, in most cases today, offshore wind generation is still too costly and risky to leave it entirely to market forces to provide ongoing investment. The full potential of this promising technology can only be realised through continuous deployment and long-term political commitment. But how can we stimulate deployment? After some experimentation, it seems that we are finally converging towards a single approach.

It can be seen on the map below that in 2014 various types of support schemes were in place in the EU, each with their own pros and cons. 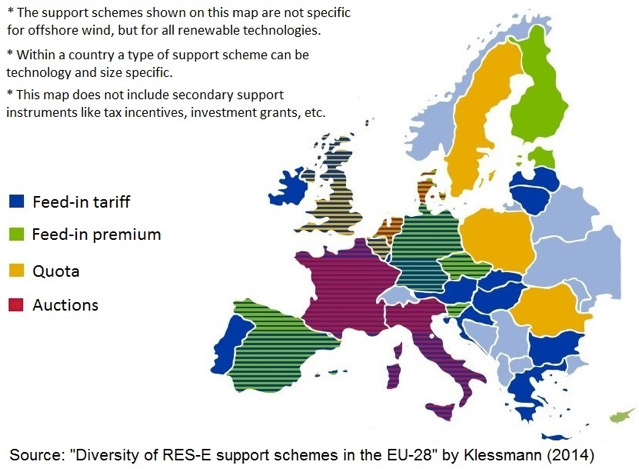 At that time a quota system[3] was in place in the UK, Belgium and Sweden. An advantage of such a support scheme is that offshore generation operators have to sell their electricity in the market and thus are exposed to a price signal. On top of this market revenue they receive a price for their green certificates which they sell in a different market. However, the price for which they can sell these certificates is very uncertain. This is the main reason for the abandonment of the quota system in the UK and Belgium. Only in Sweden, a quota system is still the main support mechanism for offshore wind.

In Germany, fixed feed-in tariffs were the main support instrument before 2014.[4] A price per every MWh produced was guaranteed to wind developers. This price was set administratively based on the estimated Levelised Cost of Energy (LCOE)[5]. The advantage of fixed feed- in tariffs is the increased confidence for investors, as the revenues of a windmill installed are not subject to the volatility of the market. On the other hand, this also means that the generators lack a guiding price signal and may not adapt its production to the system needs. Finally, by setting the tariffs administratively there is a risk for under- or overcompensation.

Best of both worlds

Denmark[6] and the Netherlands were the first nations to implement a sliding premium support scheme. In this scheme a premium payment per every MWh produced is added to the revenue made from selling the electricity in the market. The magnitude of this variable premium is determined ex-post, in most cases on a monthly basis. The premium is calculated as the difference between a reference tariff level, administratively set or determined by an auction, and the (monthly) average wholesale electricity price. This means that if the market price drops the premium goes up and vise-versa. With this support mechanism, offshore wind generators are more reactive to market signals but without their revenue risk being increased significantly.

Today the UK[7], Germany, and Belgium have adopted, or are in a transition towards the adoption, a sliding feed-in premium or a very similar mechanism to support the deployment of offshore wind generation.

A push from above: administratively set tariffs vs competitive bidding

Today there is a steady shift away from administratively determining the reference tariff levels, the remuneration per MWh electricity produced a developer expects to receive, towards a market-based approach in the form of an auction. Also the European Commission pushes towards the gradual introduction of competitive bidding processes for allocating public support.[8]

The bidding process allows for price discovery, and, with sufficient competition, the auction outcome can be cost-effective.[9] Also, by applying this approach, a steady hand can be kept on how much capacity is added each year. An auction can be site-specific and therefore very compatible with offshore wind development; this way site planning, installation approvals, and grid connections can be dovetailed. The main risk of auctions is the underfilling of political targets as it could happen that not all winning projects are being implemented.[10]

To summarise, this blog in one sentence; it seems that after some experimentation, the funding for offshore wind in the EU is converging, and it’s converging for the right reasons, towards a site-specific auction-based sliding feed-in premium support scheme.

[2] A more detailed overview can be found in “A review of regulatory framework for wind energy in European Union countries: Current state and expected developments” by J. Serrano González and R. Lacal-Arántegui (2016), “The legal and economic impacts of implementing a joint feed-in premium support scheme on the development of an offshore grid” by S. S. Torbaghan et al. (2015) both published in Renewable and Sustainable Energy Reviews and “An offshore wind union? Diversity and convergence in European offshore wind governance” by O. Fitch-Roy (2015) published in Climate Policy

[4] A sliding feed-in premium was introduced as an optional support instrument in 2012, and made the mandatory support mechanism for all developers of new installations from the EEG 2014 onwards. The fixed feed-in tariff is now only applied to small installation or by exception. See also: “State aid: Commission approves German renewable energy law EEG 2014”, press release by the EC (July 2014)

[5] The LCOE can be regarded as the minimum cost at which electricity must be sold in order to break-even over the lifetime of the project.

[6] Also fixed feed-in premiums with a cap as support mechanism were experimented with in Denmark, these are slightly different than sliding feed-in premiums defined as in this blog. For more detailed information please consult: “30 years of policies for wind energy” by IRENA-GWEC (2012) and “Best practice design features for RES-E support schemes and best practice methodologies to determine remuneration levels”, deliverable 5.2 for the DIACORE project by Fraunhofer ISI (2014)

[7] In the UK a Contract for Difference (CfD) is applied. A CfD is very similar to a sliding-premium mechanism. In the ex-post calculation, if the (averaged) market price is below the reference tariff level (so called strike price in the CfD case), the same payment is received by the operator having a sliding-premium or a CfD with the same reference tariff level/strike price. However, if the (averaged) market price is above the strike price the difference has to be paid back by the operator having a CfD to the counterparty (government), while for a sliding premium mechanism this is not necessarily the case. Based on: https://energypedia.info/wiki/Feed-in_Premiums_(FIP), consulted on 18/09/2016

[8] European Commission – IP/14/400 published on 09/04/2014. Both a gradual introduction of competitive bidding processes for allocating public support as a shift from fixed feed-in tariffs to (sliding) feed-in premiums is included in this document.

[9] For more information please consult: “Renewable Energy Auctions – A Guide to Design” by IRENA and CEM (2015)

[10] An administratively set tariff for a feed-in tariff or premium could be seen as a providing an option to develop a project (quantity to be installed is not fixed), while an auction implicates an obligation to develop for the winners.